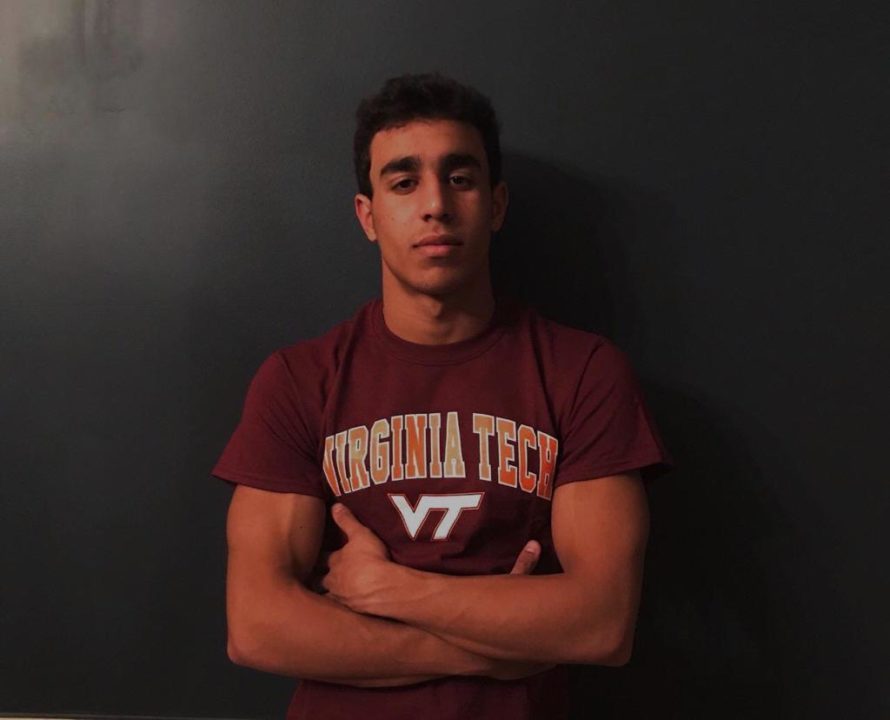 Virginia Tech freshman Youssef Ramadan came within a hair of the 100 fly school record on the second day of the Virginia Tech Invite.

While pool records didn’t fall quite as frequently as they did the day before, there was still plenty of fast swimming at the Christiansburg Aquatic Center yesterday as the Virginia Tech Hokies continued their ACC Champs tune-up at the Virginia Tech invite.

The biggest swim of the day came from Hokies freshman Youssef Ramadan. The Egyptian national flirted with the 100 fly school record in prelims, clocking a 45.68 that was only 0.08s off the school record set by teammate Blake Manoff at last year’s ACC Championships, and breaking the pool record. Ramadan was just a tick off of his morning time in finals, going 45.71. Still, Ramadan’s prelims time puts him at #9 in the nation so far this season.

Head coach Sergio Lopez has built a solidly-deep butterfly group over the last few years, and the Hokies had a total of five men under 47 seconds yesterday, between prelims and finals: Antani Ivanov (46.09), Manoff (46.15), Henry Claesson (46.66), and Khalil Fonder (46.99). Manoff and Ivanov finished 2nd and 3rd, respectively, in the 200 fly at last year’s ACC Championships.

The Hokies were also on pace to break the school records in both in the men’s and women’s 200 medley relays, but both were disqualified, the men for an early takeoff and the women for a violation of the 15m rule on the backstroke leg.

The Hokies also used the evening session to do recognize their seniors, and you can check out the video of that on the HokieSwimDive Instagram page, here.

Manoff and Ivanov did not finish 2nd and 3rd respectively at last year’s ACC championships.

ACC’s is going to be a quite fast meet – NCSU, UVA, VPI all looking very fast, UNC, GT, Pitt, FSU coming on.

VT is definitely not “Butterfly U”

Perhaps not “Butterfly U” but they have a deep butterfly group. 1 45 and 4 46s right now is no joke.

Yes, I understand they have a good butterfly group now, but they have only had 1 total scoring swim (B final) in the past 5 years at the NCAA championships. Their team record in the 100 butterfly didn’t even make top 16 in 2019. That is not “Butterfly U” worthy.

you are arguing about imagined moniker that has no scale, Then you gin up some scale to make your point.

Will Hayon was 47.56 yesterday at Wisconsin High School State.

Proves my point even more