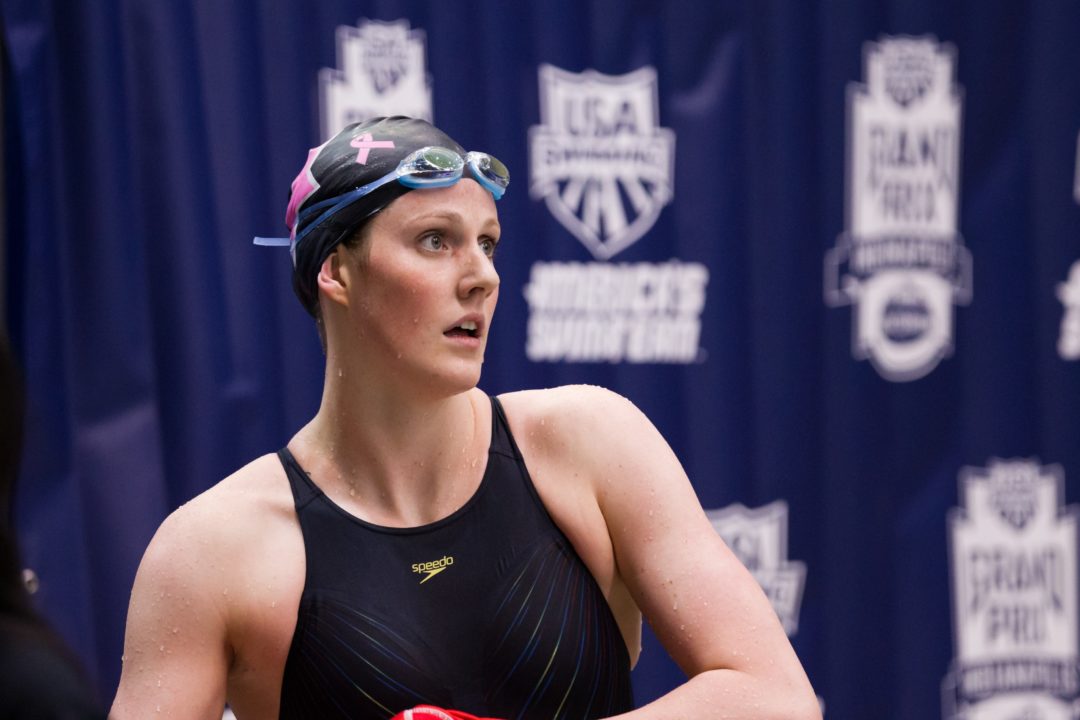 The Federal Way Sectional Championship meet wrapped up with yet another National Age Group Record on Sunday, along with another individual win from Missy Franklin.

Franklin started the session with a 1:55.49 victory in the 200 IM. That’s better than she was in February at the Colorado High School State Championships, though it’s still a tenth away from her best time that was done in 2010.

Franklin, maybe a bit surprisingly, passed on the 50 free, as this meet limited swimmers to only 6 events. Her only other swim on Sunday was the breaststroke leg of the 400 medley relay, where she swam a 1:02.66. Her best flat-start time in the 100 breast is a 1:04.0, so that time shows progress (her reaction time wasn’t great so not a whole lot of the improvement came there).

The National Age Group Record went down at the hands of Scottsdale Aquatic Club’s Ryan Hoffer, who was a 20.02 in the 50 free. That bested the 20.08 that he was in prelims that previously had been the fastest by a 13-14. (Read more details about the record-breaking swim here).

Tyler Messerschmidt, who is also representing Scottsdale while he’s on hiatus from Cal, was the only sprinter better than Hoffer with a 19.25. That’s a tenth better than the 19.37 he was in a relay leadoff at NCAA’s last season.

Arizona-bound Carson Brindle from the Multnomah Aquatic Club took 3rd in 20.07. That’s his career-best as well.

Jasmine Mau started her meet out earlier in the weekend with runner-up finishes in the 200 fly and 100 free. Now, as each race got shorter, she will end with a win in the 100 fly on Saturday, and the 50 free on Sunday. She was a 22.70 in the sprint event to lead a trio of young women under twenty-three. Amy Bilquist (22.84) and Victoria Toris (22.85), both 15-year olds from Scottsdale, placed 2nd-and-3rd respectively.

Thomas Brewer, a 16-year old from Current Swimming, won the men’s 200 IM in 1:47.12. That improves his season-best, though still leaves him as the 4th-ranked 16-year old in the event this season.

Christine Jennings, the best-known of the professional representation in this meet, won the women’s mile in 16:16.56. Top amateur honors went to Lauren Abruzzo from the DU Hilltoppers in 16:25.08.

Peter Kotson from the Helena Swim Team won the men’s race in 15:16.86. That crushes, by almost 30 seconds, his Montana State Record in the event (for swimmers of all ages). Kotson, before he’s done, could be among the best Montanan swimmers in history (alongside David Cromwell, a former US National Team member.)

Congrats to Tommy Hannan and King Aquatic Club for winning the combined team title at the sectional meet!

Ok, I was a little too optimistic. I expected a sub 19 for Tyler Messerschmidt, a sub 20 for Ryan Hoffer and a 1.53 for Missy. But 19.25, 20.02 and 1.55.49 are still great times. I think Missy was a little tired after all her races. Ryan Hoffer wasn’t lucky. Almost under 20! Can’t wait to see if he can already swim next summer under 23 in long course. Michael Andrew now has a big target. I think he will respond next winter. Other swimming results from the last weekend. Sinead Eksteen, 12, next Katie Ledecky? She is from the same club, NCAP, and has almost swum the same times as Katie at the same meet 3 years ago. At… Read more »