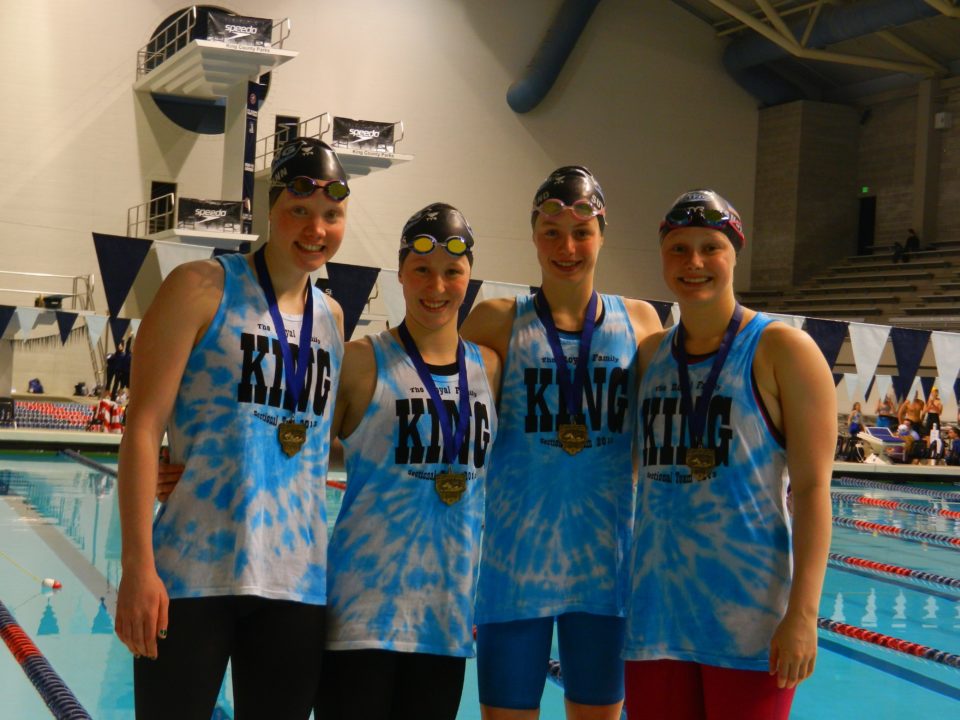 (From L-R: Carolyn McCann, Hannah Weiss, Ashley Sutherland, Heidi VanderWel) the girls from King Aquatic broke the 15-18 National Age Group Record on Sunday, and none of them will graduate. (Photo Courtesy: Mark Moffatt)

Multiple teams almost took down the National Age Group Record in the 400 medley relay on Sunday. Out east, SwimMAC Carolina was about a second away, but in Federal Way, the girls from the King Aquatic Club snapped the record with a 3:38.08.

That swim snapped a 2010 record held by Rachel Bootsma, Abby Duncan, Hailey Szews, and Tess Behrens: all of whom have gone on to be big contributors for top 10 collegiate programs. They swam a 3:38.56.

None of those names are necessarily swimmers that you’ve heard a lot about before; however, with three juniors and a sophomore, all four swimmers will have a chance at lowering this record again next season, and all will begin to creep into the national lexicon over the next 12 months as those are all solid splits (especially Weiss and McCann on the front-half of the relay).

Thanks in large part to these four girls, King were the sectional champions in their home pool (though not owned pool) in Federal Way. Read the full Sunday night recap here.

Way to go Hannah and team!
Her father was a top national swimmer himself!