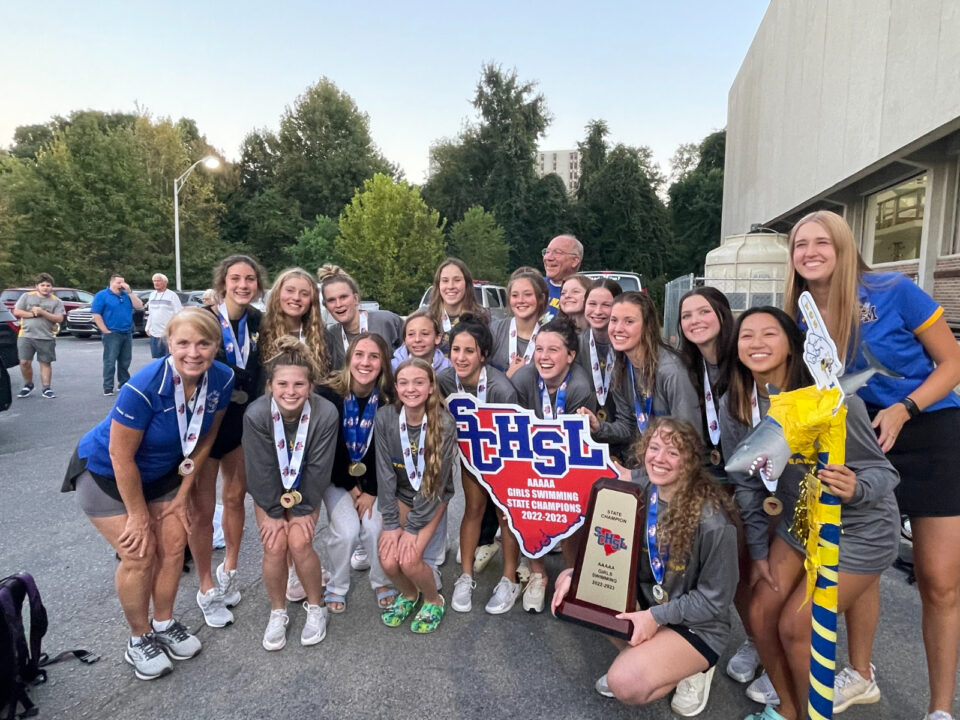 For the first time since 2016, there is a new state champion in South Carolina girls’ high school swimming. Last year’s runners-up Fort Mill rolled to a victory in the South Carolina 5A High School Swimming & Diving Championships for the state’s largest high schools.

The Fort Mill girls have been runners-up 8 times in school history, but this is their first state title.

Wando, the five-time defending girls’ champions (who won by over 114.5 points last season) slid to 7th place this season. Wando, the state’s biggest high school, has carved up its attendance zone after Lucy Beckham High School in fall 2020. This is the first season where Beckham has a full enrollment of 9th-12th graders. Beckham competes in AAAA, and finished 2nd at this year’s state championship meet there.

In South Carolina high school swimming, there are three divisions: AAA, AAAA, and AAAAA. Schools in the AAAAA division are the largest of the three. The state doesn’t include diving in its championship meet.

The Wando boys reversed the narrative. After falling to JL Mann by just 4 points last season, Wando was on top this year, winning another nailbiter by 13.5 points ahead of Fort Mill. The JL Mann boys were 3rd.

Both times are new personal bests for her, including whacking almost four seconds off her previous best in the 500 free.

Olivia Corbi finished the meet a perfect 4-for-4 when she anchored Fort Mill’s closing 400 free relay to a win in 3:38.22. Olivia Corbi’s split was 53.13. Ava Corbi led off that relay in 54.96, and they were joined by Lila Hadley and Halligan in the victory.

Olivia Corbi is still uncommitted early in the 2024 recruiting cycle. She is the eldest of a budding South Carolina swimming dynasty: her younger sister Bella also swam at the meet, and Julia is not far behind.

Franklin, who was top 4 in both the 100 and 200 breaststrokes at the YMCA National Championships in March, is committed to stay close to home at the University of South Carolina.

Nation Ford, the meet’s runners-up, didn’t have any double winners, but they did have two single winners. Emily Eaton won the 100 free free in 52.19 for her first career state title. She has improved every year, finishing 6th in 2019, 4th in 2020, and 3rd in 2021 before breaking through for her first title. She’s another South Carolina commit, showing a commitment by new Gamecock head coach Jeff Poppell to prioritize keeping the state’s best swimmers at home.

Eaton had big relay swims as well for Nation Ford, including a 23.61 rolling-start on the 200 free relay that was .9 seconds better than her flat-start swim. Nation Ford finished 2nd in that race.

Nation Ford’s other win came in the 100 backstroker. Sophomore Sophia Bujoreanu won that race in 58.27 after placing 3rd last season. Fort Mill is very close to the border with North Carolina, and both Bujoreanu and Eaton do their training across the border in North Carolina’s more-developed swimming system.

Other Event Winners and Notables:

The Wando boys won the school’s 7th state title, which moves them into a tie with Riverside High School for the third-most across the state’s three divisions (behind JL Mann and AAAA team Eastside High).

It was a lone individual event win that carried the day for the Wando boys. Junior Charlie Green earned his first individual state title by winning the 500 free (4:35.97). He was runner-up in both that event and the 100 back at last year’s state championship meet, but he dropped more than six seconds in the 500 free to win this year and set a new personal best.

Green placed 2nd this year in the 100 backstroke in 51.07, getting out-touched by JL Mann senior Bennett Parramore (50.99). Parramore successfully defended his 100 backstroke title and also added a win in the 200 IM in 1:54.49. Parramore, who has not announced a college commitment, came out on top in two nail-biter races: his total margin of victory between the two was just .23 seconds.

While Green was Wando’s only individual event winner, he also played a crucial role in Wando’s two winning relay efforts. He split 24.17 on the leadoff leg of their 200 medley relay, where he partnered with Jacob Hills, Mason Camp, and Chase Healey for a win in 1:36.41.

JL Mann finished 2nd in both of those relays. Parramore anchored their 400 free relay with a split of 46.74, which was the second-best split of the field.

The best split of the field was a 46.09 leadoff leg for Chapin senior Simon Thompson, who also won both of his individual races. That started with a 20.39 in the 50 free and continued with a new personal best swim of 45.17 in the 100 free. Thompson successfully defended both titles. He’s committed to Navy next year, where his best times already put him within striking distance of relay spots.

Besides Parramore and Thompson, the other double winner on the day was Brett Bailey of Dorman high School. He won an unusual double: first he took the 100 fly in 49.55, and then he won the 100 breast in 57.28. That 100 fly swim is a new best time for the uncommitted junior.

Bailey now has three career titles in three different events: he won the 200 IM in 2020 as a freshman.

He also split 21.40 to lead off Dorman’s winning 200 free relay. He combined with Ross Burns, Cole Smith, and brother Caleb Bailey to win in 1:29.41, just ahead of Fort Mill.