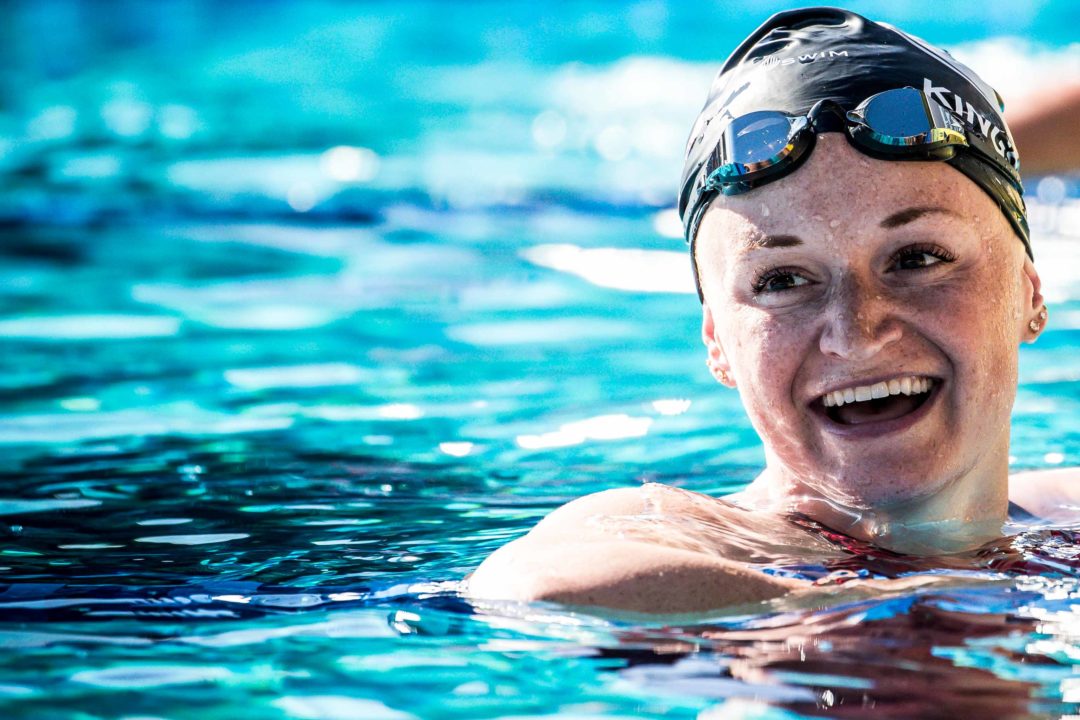 Kingsley, a former standout at the University of Georgia, announced her retirement from swimming Wednesday. Archive photo via Jack Spitser/Spitser Photography

“Sad, yet proud, to say that I’m officially retiring from swimming. I’ve accomplished more than any surgeon would imagine, and qualifying for 3 Olympic Trials is something I am proud of,” she wrote. “It’s time for a new chapter and for new dreams.”

Sad, yet proud, to say that I’m officially retiring from swimming. I’ve accomplished more than any surgeon would imagine, and qualifying for 3 Olympic Trials is something I am proud of. It’s time for a new chapter and for new dreams 💛 pic.twitter.com/a9j3PTgbG1

Kingsley was a member of the 2013-14 National Team, and went on to become a six-time NCAA All-American before graduating from Georgia in 2018. She is the second-fastest 100 butterflier and fifth-fastest 200 butterflier in UGA history. In high school, Kingsley won five South Carolina state titles and set 24 state records.

She finished 16th in the 200 fly at Olympic Trials in 2016 and after turning pro, scored 18 points at International Swimming League meet in Naples, where she won the 200 fly (she ranked 28th in MVP scoring at that meet, which was 10th among Cali Condors in attendance).

Throughout her career, Kingsley often battled injury. One week after qualifying for her first international team, Junior Pan Pacs in 2012, she dislocated her left knee, which was the beginning of a series of knee problems that have required two surgeries. Following 2016 Trials, she semi-retired from the sport because of the knee issues.

She made a comeback in November of 2018 that was derailed roughly six months later when she was hit by a car. Prior to that setback, in March 2019 at Des Moines Pro Swim Series, she went a best time in the long course 200 fly (2:10.91) for the first time in nearly six years, and then improved on that time shortly thereafter and went a new best time in her long course 200 fly.

After the car accident, Kingsley’s breakthrough 2019 continued, including her first sub-2:10 swim in the 200-meter fly at Summer Nationals (where she would end the day with 2:08.26).

Congrats on a stellar career!! It has been great to watch Megan’s comeback over these last several years. We will miss you!

On to the next chapter. Great swimming career. DGD. Go Dawgs!

Congrats on an amazing career! Best of luck on the next chapter of your life Megan!