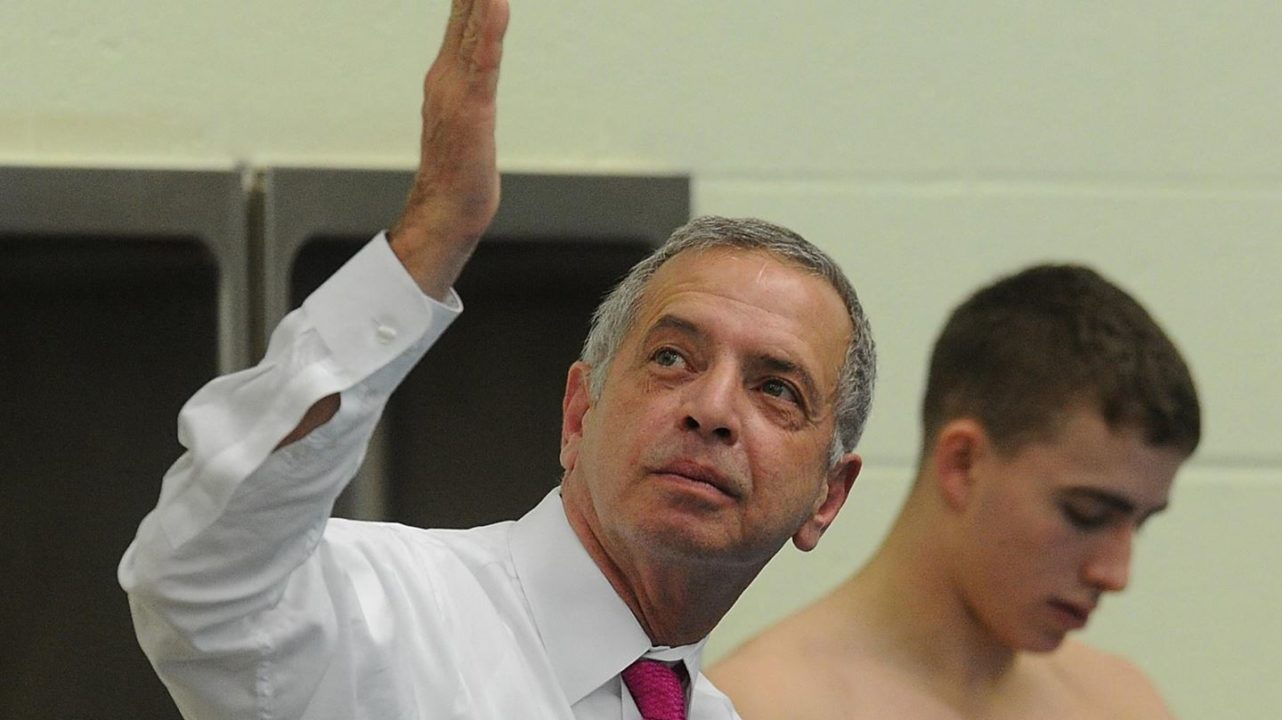 Joe Suriano, who served as the Navy diving coach and a physical education instructor at the USNA for 35 years, passed away this week in Annapolis. Current photo via Navy Sports

ANNAPOLIS, Md. –– Joe Suriano, who served as the Navy diving coach and a physical education instructor at the USNA for 35 years, passed away this week in Annapolis.

A celebration of his life will be held Sat., Feb. 15, from 4-6 p.m. in Lejeune Hall with a reception to follow.  Those interested in attending are asked to register in advance via this LINK.

The Suriano family is requesting that in lieu of flowers, donations be made in Joe’s name to the Navy men’s swimming, women’s swimming or diving programs.

“During my tenure as Athletic Director,” said Chet Gladchuk, who has been in his position since 2001, “Joe was as fine a coach, educator, person, and leader we have had within the physical mission.  He embraced and inspired everyone with his wonderful personality and devotion to the development and leadership of our midshipmen.  He was immeasurably respected by all.  When he spoke, it was always insightful and influential in a very constructive and meaningful way. I enjoyed his sense of humor and always appreciated his determination to put forth our absolute best effort in every competition.  Joe was a winner who always portrayed and personified the will to win.  He was a benchmark for achievement in the sport and one of the greatest ever at Navy.  We are devastated by the loss of this wonderful man.”

Long respected as one of the top diving coaches in the country, Suriano saw 12 of his divers qualify for 22 NCAA Division I Championship meets and earn 15 All-America accolades in his tenure.  Bill McCormick ’86 and Nate Smith ’96 each advanced to the NCAA Championship in all four of their respective seasons.  Prior to the Navy women’s program joining the Division I ranks in the 1991-92 season, his divers earned 15 NCAA Division II All-America certificates. This list of honorees includes Stacia Johnson ’92, who won the 1991 NCAA Division II title on the three-meter board.

“I had the opportunity to train under Joe as a Midshipman at the Naval Academy from 1982 to 1986,” said McCormick. “With the new LeJeune Hall training facility and a developing program, we worked hard to put Navy on the map as a premiere swimming and diving program.  Joe’s leadership and unmatched work ethic were the key.  Joe’s mantra was, ‘be enthusiastic, be on time, and give 100%.’  Joe always gave 100% of himself to develop the growing brood of student athletes and keep us on the path to success.  His persistent positive attitude and subtle corrections to the perfection minded divers gave us the winning edge.  I must have heard ‘good dive’ half a million times.  Our frequent bus trips to away swim meets were a welcome escape from Midshipman life in Bancroft Hall, which also gave Joe and swimming coaches Lee Laurence and John Havlik a chance to drop their guard and hang out with the boys.  Joe occasionally had us over to his house on the weekends and I enjoyed spending time with Patty and Michael.  Joe often took us sailing on his orange Hobie 16 with his ever present cooler of libations in a specially designed rack.  Our swimming background paid off one day when the summer wind died and we had to paddle home like a surfer laying on hulls.  Joe made a profound impression on a me as a skinny, young diver from Wisconsin.  He gave me the opportunity to prove myself and made the difficult times seem fun. It was a blessing to have him in my life and I’m a better man to have known him.  Stay strong Patty, Michael and Doug; you are in my prayers.”

“Joe Suriano’s arrival was one of the best things to happen to Navy swimming and diving,” said Lee Lawrence who, as Navy’s swimming coach, shared the pool deck with Suriano for a quarter of a century.  “He helped bring new respect on a national level to the program with the performances of his divers at major meets.  Away from competition, we shared a countless number of bus rides and dinners together during which each one of us gave the other as much grief as possible.  I’m really speechless on his passing.”

“Joe Suriano was and always will be a Navy coaching legend,” said current Navy men’s swimming head coach Bill Roberts.  “He was able to achieve so much together with his athletes during his time as our diving coach.  He built the Navy diving camp into an incredible experience for so many young divers, which was highlighted by a very spirited and well choreographed show at the end of each camp week.  He also spent hours on deck teaching and working with Midshipmen as a tenured professor in the physical education department.  He had an incredible impact on many people during his decades in Annapolis.

“Personally for me, as a young assistant who arrived here in 1997 through our final days on deck together coaching and teaching, Joe, along with his wife Patty, went above and beyond with their support for myself and my family.  I cannot put into words how saddened we are and how much we will miss him.”

“We at the Naval Academy and myself personally are saddened by the passing of Joe,” said Navy women’s swimming head coach John Morrison.  “As one of the most respected diving coaches in the country, Joe set the standard for those in our program to always strive for excellence beyond what they thought possible.  More importantly, he mentored all of his student-athletes and the coaches he worked with to be great human beings.  His charismatic teaching and coaching style brought levity to an often stressful environment.  Our community will miss Joe daily, but our memories of his kindheartedness and passion to serve others will never be forgotten.”

On the national and international levels, Suriano was named an International Olympic Committee diving expert in 1985 and conducted a 21-day clinic for 30 diving coaches in New Delhi, India.  In 1994, he was named an official and an assistant diving coach for U.S. Diving at the Dive Canada International Championships.  He served as an official in 1995 at the World University Games in Fukouka, Japan, and at the World Military Games in Rome, Italy, later that year.  He also served as a diving coach at two U.S. Diving National Training Camps and was named to the 1995-96 U.S. Diving national coaching staff.  Suriano directed the American diving team at the 1999 World Military Games in Zagreb, Croatia, then completed a term as the chairman of the NCAA Swimming and Diving Rules Sub-Committee in the fall of 2001.

“Joe was very much respected in the swimming and diving community,” said current Navy diving coach Rich MacDonald.  “I personally had so much respect for him as a coach and, more importantly, for the man he was.  Taking over his program that he built over the years was a tremendous honor and something I keep on a grand pedestal of accomplishments in my career.  At just about every competition I have gone to since taking over here at Navy, the opposing coaches would ask how Joe doing in retirement.  It was always followed by stories, love and laughter.  I know those stories will live on for many, many years, as will the love and laughter. I know that Patty, Michael, Doug and the rest of Joe’s family are devastated, as we all are. Our hearts and prayers go out to them. RIP Joe.”

“The U.S. Naval Academy is a powerful school that has the ability to open many doors,” said Suriano in announcing his retirement in May 2013. “It has provided me with the opportunity and pleasure of working with past and present leaders and heroes of our military. I remember working with midshipmen who are now admirals.  Winning in diving has always been very important. But it is how you go about striving for and attaining those wins — maintaining respect for both our sport and our opponents while remembering we are always representing the Navy Academy — that is truly important to all of us at Navy. That is one of the many reasons why I have been so proud to have coached here.”

Joe was perhaps the most unique person I have ever met, a true renaissance man if there ever was one. It was my distinct pleasure to have shared an office with him for 4 years while serving as the assistant men’s swimming coach at Navy. Joe was, and always will be, my friend.