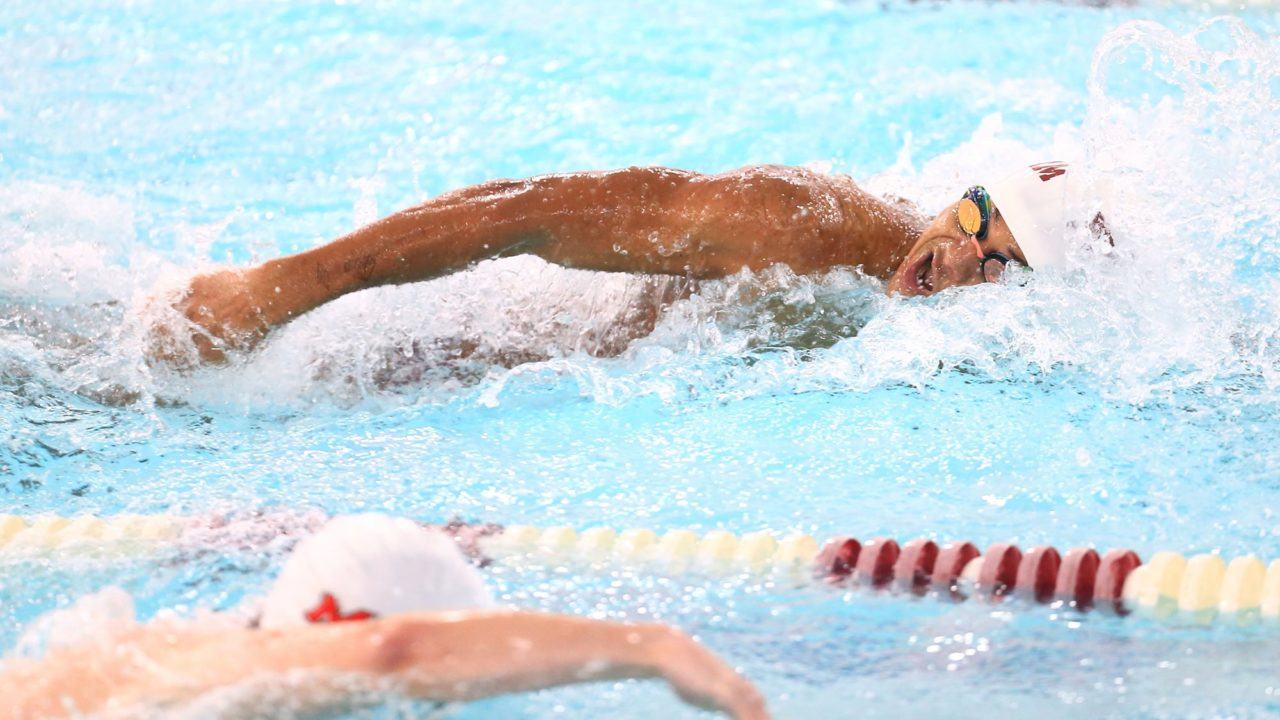 The Fordham women posted a 199-85 win over Iona, while the men's squad edged the Gaels 150-144. Current photo via Fordham Athletics

Quinn has served on staff since August 2019 and has played a vital role in the growth and unprecedented success of the program over the last three seasons.

NEW ROCHELLE, N.Y. – The Fordham swimming  & diving team had its final road meet of the season prior to the Atlantic 10 Championship on Wednesday night, as the Rams swept the dual meet from the Iona Gaels in New Rochelle, N.Y.  The Fordham women posted a 199-85 win over the Gaels, while the men’s squad edged the Gaels for 150-144 win.

Michelle Martin also had a good night in the pool winning the 100 butterfly event in 57.64 seconds, while also being a part of two winning relays.  She joined with Milly Furneaux, Tara Brunner, and Theresa Mullen to win the 200 medley relay in 1:48.11, while in the 200 freestyle relay, she won with Kiara Norris, Noelle Theodoulou, and Brunner in 1:37.13.

The Rams will next be in action on Saturday, February 2nd, when the team hosts Massachusetts for Senior Day at 1:00 PM.

NEW ROCHELLE, NY – In one of the most exciting dual meets of the season, the Iona College men’s swimming and diving team overcame a 32-point deficit only to fall short .28 seconds in the final race of the day, erasing what could have been the program’s first ever win in the programs 44-year history over the visiting Fordham University Rams.

The entire day featured two critical disqualifications in the men’s meet. In the opening 200-Medley Relay the Fordham quartet was disqualified for a backstroke start infraction that opened the door for the Gaels’ team of senior Matthew Bosse, sophomore Conor Mullin, freshman Jackson Madonia and rookie Jalen Ramjohn to grab an early lead.

Junior co-captain Matthew Anderson took the 1,000-Freestyle at 9:46.22 with sophomore Robert Wisniewski and rookie Trevor Foti grabbing third and fourth to hold the lead. The 200-Freestyle saw freshman Daniel Hadary post a 1:43.85 for an apparent win; however, the referee called a false start and Fordham was awarded the win instead.

However, the Maroon & Gold answered in the next race with co-captain Matthew Bosse taking the 100-Back at 52.48; sophomore Spencer Moran placed second at 52.99.

Fordham took the 100-Breast, 200-Butterfly, 50-Free and 100-Freestyle races with an Iona racer second and third in each, but Bosse struck again in the 200-Back at 1:55.04 for the win. Madonia, Moran and Ramjohn combined for three consecutive wins in the 200-Breaststroke, 500-Freestyle and 100-Butterfly to send the meet to the 200-Freestyle Relay.

The race saw Fordham lead by .01 second at the halfway mark, stretching it slightly to .28 at to finish at 1:25.74 over the quartet of Moran, Hadary, Townsend and Mullin who completed the race at 1:26.02.

The Iona women picked up two wins on the day as sophomore Willow-Lopez Silvers claimed the 100-Back at 59.80 and classmate Adrienne Bilello took the 200-Butterfly at 2:12.54.

“Our men really responded well today and were aggressive in every race and nearly pulled off a big upset,” head coach Nick Cavataro said. “Our women faced off against one of the Atlantic 10’s best teams and competed at every turn.”

The Iona men’s four meet win streak ends, moving to 7-2 on the season and the women fall to 8-4.

The Gaels will host MAAC-rival Manhattan College on Saturday at the Hynes Pool at 1pm in the final dual meet, Senior Day, of the season before the MAAC Championships. Seniors from the men and women’s side will be honored prior to the start of the meet.