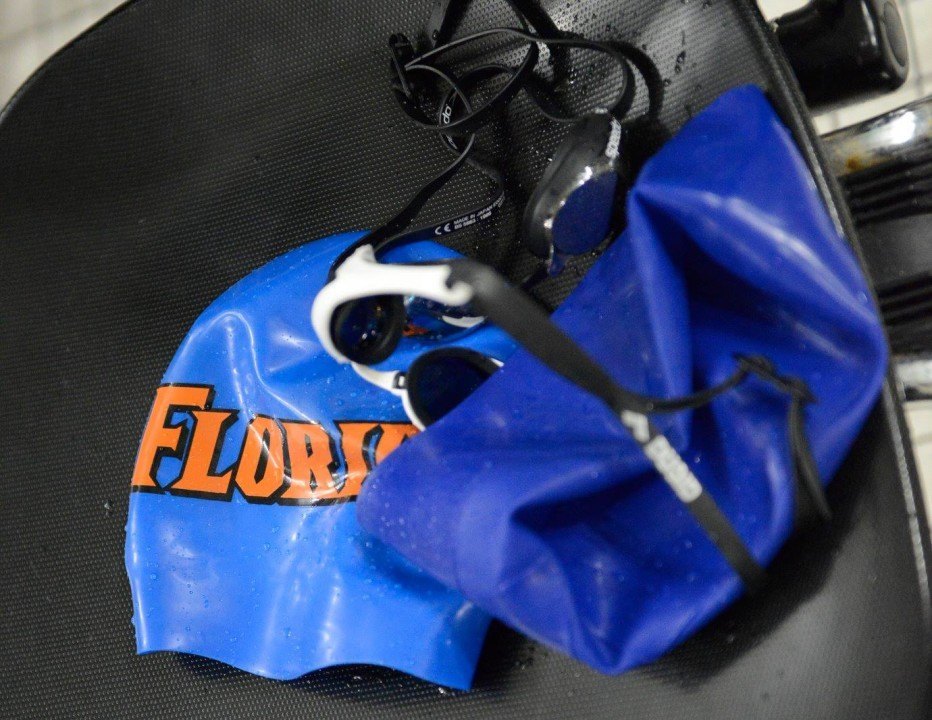 The Florida Gator women hit the road on Thursday, as they traveled to the University of Arkansas for an SEC dual meet. The Gators came home with their first SEC dual meet victory of the 2016-17 season as they defeated the Razorbacks 188-112.

The freshman class continued to play a huge role for the Gators, as 4 of the newcomers won an individual event today. Among those 4 freshmen was sprint standout Sherridon Dressel, who charged to a 23.69 victory in the 50 free. Dressel also swam to a 2nd place finish in the 100 free behind junior teammate Amelia Maughan, an SEC 200 free champ. Maughan was a double event winner for the Gators today with her 51.71 in the 100 free and 1:49.79 in the 200 free.

Freshman Emma Ball continued to shine in her first-ever short course yards season. Ball, a native of Canada, popped a 54.40 to win the 100 back. Her freshman teammates Savanna Faulconer and Kay Sargent followed suit with individual wins of their own. Faulconer won the 200 breast in 2:15.67, while Sargent won the 200 IM in 2:03.79 just ahead of Faulconer (2:03.82).

Arkansas senior Aiden Lister picked up a victory for the Razorbakcs in the 500 free. Her 4:51.82 in that race was good for a victory ahead of Florida senior Autumn Finke (4:52.71), who won the 100 free earlier in the session. Lister was also a close 2nd behind Maughan in the 200 free, finishing just a few hinderdths back to crack 1:50 with her 1:49.83.

The Razorbacks also brought in event wins with junior  Olivia Weekley and sophomore Madison Strathman. In the 100 fly, Weekley swam to the wall in 55.03 for the victory. Strathman, on the other hand, was the 100 breast champ with her 1:02.59.

No. 18 Florida won 11 of the 16 events, including the 200 of each stroke and both relay events. The victories were widespread – eight different swimmers generated the nine individual wins.

Amelia Maughan led the Gators as the only multiple-individual-event winner on the night, placing first in the 100 (51.71) and 200 free (1:49.79). Sherridon Dressel and Autumn Finke were the other two Florida freestyle winners, with Dressel touching first in the splash and dash at 23.69 and Finke taking the 1000 free title in 9:54.24.

Freshmen Savanna Faulconer and Kay Sargent put themselves into the scoring mix as well, with Faulconer winning the 200 breast in a B-standard time of 2:15.67 and Sargent taking the 200 IM in 2:03.79.

To round out the individual swimming titles, Alyssa Yambor-Maul placed first in the 200 fly in a B-standard time of 1:59.43.

Florida’s A-team also won both relay titles. Ball, Dani Keymont, Yambor-Maul and Dressel combined in the 200 medley relay to touch in 1:40.91, while Dressel, Kelsey Dambacher, Mollie Pulte and Maughan took first in the 400 free relay at 3:27.60.

Senior Taylor Katz, who has been sidelined with an injury, eased back into the pool with appearances in the 100 and 200 fly.

Arkansas took both the 1-meter and 3-meter diving titles, but freshman Brooke Madden finished second in the 1-meter with a season-best total of 283.73 points, and sophomore Teya Syskakis was the 3-meter runner-up as well with 293.93 points.

On Saturday, the women’s team will rejoin the men in College Station, Texas, for a 3 p.m. ET meet with Texas A&M. The Aggie women, who moved to 2-1 on the season with a Thursday night road loss to No. 7 Texas, are ranked 14th in the latest CSCAA poll, while the Aggie men (2-0) are unranked.

POPPELL’S TAKE ON SWIMMING
“The girls did a fantastic job competing on the road against a strong Arkansas team. We had several season-best performances both in the pool and on the diving boards. In addition, it was nice to see some new faces making major contributions today, which will surely help our team down the road.”

GILLOOLY’S TAKE ON DIVING
“Once again, we were able to raise our level and compete very well. It was great to see (Arkansas diving coach) Dale (Schultz) and a lot of fun on a personal level for myself and the divers. He was an excellent host with a really good team. I was especially proud to have Abby and Brooke join Teya and Miranda (Goss) in achieving their zone qualifying scores for the women’s team. Once again, we leave a better team than when we arrived.”

FAYETTEVILLE, Ark. — The Arkansas Women’s Swim and Dive team fell for the first time this season Thursday evening, as the No. 18 Florida Gators defeated the Razorbacks by a score of 188-112 inside the Arkansas Natatorium.

The loss is the first under first year head coach Neil Harper as Florida remains undefeated all-time against the Razorbacks. It marks only the second time in the last six SEC dual meets that Arkansas has lost, dating back to the 2014-15 season.

Junior diver Nicole Gillis was remarkable once again. After setting a pool and school record in the 1-meter springboard against Drury earlier in the season, Gillis breaks the school record for the second consecutive meet with a zone qualifying score of 337.88. She also grabbed a first place finish in the 3-meter dive as well with a score of 304.05 to qualify for the NCAA Zone Diving Championships in the event.

Freshman Ayumi Macias swam a personal best in the 1000 freestyle (10:04.90), which was quicker than any other time in the event a season ago.

Coach Harper’s Thoughts
“I thought we performed really well. We have had a hard week of training and we didn’t want to do anything special for this meet. I just wanted them to compete with big hearts and pride, which they did. They came out and gave it their all. We can’t control what the opposition does, this is a sport where we get in our lane and do what we can. I was very happy about how we performed. We swam so much faster than we did last meet and most times, a lot of what they did today, will win most meets so I am very happy about their improvement at this point in the season.”

Up Next
Arkansas will conclude the second of two dual meets in back-to-back days tomorrow, Friday, Nov. 4, as the Razorbacks face the South Carolina Gamecocks at 3 p.m. at the Arkansas Natatorium.