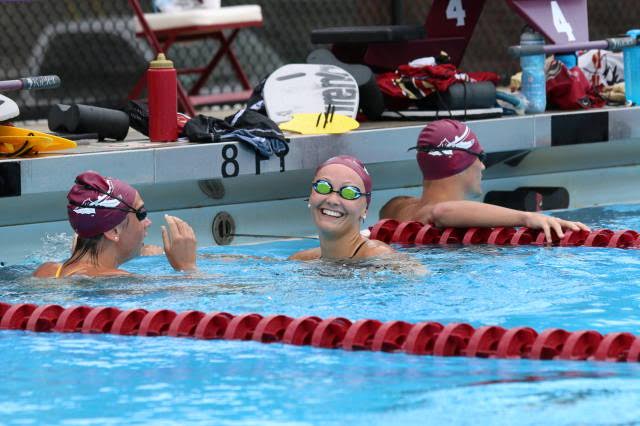 Through day 1 of the meet, FSU and FGCU are tied at 83.5 points, while both teams lead UWF and Florida Southern. Archive photo via Ozzie Quevedo

FSU VS. FGCU VS. UWF VS. FLORIDA SOUTHERN

The Florida State men traveled down to Fort Myers, Florida on Saturday for a 2-day dual meet with Florida Southern. Through day 1 of the meet, the Noles are ahead with 120 points to the Mocs’ 47.

On the women’s side, 3 teams traveled to Fort Myers to compete in the 2-day quad meet. The Florida Gulf Coast women are the hosts, with away teams Florida State, Florida Southern, and West Florida all participating. Through day 1 of the meet, FSU and FGCU are tied at 83.5 points, while both teams lead UWF and Florida Southern.

Following her 3rd place finish in the 400 IM, Kaas Elmgreen went on to win the women’s 200 fly later in the session. In that race, she finished over 4 seconds ahead of the field, breaking 2 minutes en route to a 1:59.87 victory.

The West Florida women also brought in an event win today, as former SEC Champion Theresa Michalak, a junior transfer, raced to the wall ahead of FSU’s Ware in the 50 free. Michalak was the only woman to break the 23-second barrier with her winning time of 22.53.

FORT MYERS, Fla. – The FGCU swimming and diving team wrapped up a highly competitive and spirited first day of competition in its quad meet against #29 FSU, Florida Southern and West Florida Friday evening at the FGCU Aquatics Center.

Officially, the Eagles and Seminoles are locked in a tie with 83.5 points apiece. However, diving results were not included in tonight’s team scores, and FGCU edged FSU by one point in the 1-meter competition thanks to Ashley Wright‘s (Port St. Lucie, Fla./Indian River CC/Lincoln Park Academy) first-place finish in the event. FGCU also holds a notable advantage against both Florida Southern (136.5-30.5) and West Florida (130-37).

Including Wright’s win and season-best score of 282.95 off the 1-meter board – which also marks her second straight time surpassing the NCAA Zone Diving Standard and not only registers as the fourth-best score in program history, but also a personal-best effort – FGCU finished first or tied for first in six of 10 events and turned in eight season-best performances Friday.

“It doesn’t get much closer than one point,” said FGCU head coach Dave Rollins. “We had some incredible races, but got out-touched in a couple of them, which is something we will focus on for tomorrow. For Ashley to win the 1-meter is huge. Our medley swimmers going 1-2-3 was a great way to start the meet, and to close with a new season-best time in the 400 free relay is great momentum for tomorrow.”

Based on how they finished the day, it was a fitting way for the Eagles and Seminoles to start the meet as the teams’ 200 medley relays finished in a dead heat with a time of 1:40.06. For FGCU’s quartet of Fanny Teijonsalo (Espoo, Finland/Makelanrinteen Lukio), Evita Leter (Paramaribo, Suriname/Doral Academy), Gracie Redding (Orlando, Fla./FSU/The First Academy) and Katie Latham (Deal, Kent, UK/Sir Roger Manwood’s School), it was a season-best effort in the event by 2.5 seconds.

The Eagles then jumped out to an early advantage after a dominating performance in the 400 IM when Elizabeth Zeiger (Cumberland, R.I./Homeschool), Barbara Caraballo (Ponce, Puerto Rico/Indian River CC/Newsome HS) and Christina Kaas Elmgreen (Charlottenlund, Denmark/Ordrup Gymnasium) swept the podium in the event with times of 4:18.28, 4:23.39 and 4:24.57. Zeiger’s season-best effort in the race marked the Eagles’ second NCAA ‘B’ cut of the season.

Minutes later, sophomores Hannah Burdge (Stuart, Fla./Martin County HS) and Latham turned in the team’s third- and fourth-straight season-best times in the 200 free and 50 free as they each finished third and touched in 1:50.21 and 23.15 seconds, respectively. Kaas Elmgreen and Yee Ching Wong (Hong Kong, China/Diocesan Girls’ School) then finished first and second in the 200 fly with Kaas Elmgreen narrowly missing out on her second NCAA ‘B’ cut of the season, but the Seminoles held a slight, five-point advantage going into the second break of the evening.

However, backstrokers Sandra Wilk (Lexington, Ky./Paul Laurence Dunbar HS) and Caraballo also finished first and second in the 200-yard event and immediately regained the lead of the Green and Blue after touching in 2:01.02 and 2:01.61, respectively. Wilk’s first-place effort was good for another season best for FGCU.

The two teams traded advantages for the remainder of the evening and ultimately capped off the swimming portion of Friday’s competition in a dead heat. Linda Shaw(Leeds, UK/Roundhay HS) just missed on a season-best effort in the 500 free as she touched the pads in second place with a time of 4:57.24. Then, despite Elizabeth White‘s (Fort Myers, Fla./Riverdale HS) season-best time of 2:21.16 in the 200 breast, FSU swept the podium in the event.

FGCU once again came out of the third and final break of the day strong as the Eagles’ 400 free relay of Latham, Teijonsalo, Redding and Burdge turned in an extremely impressive performance to touch first in a season-best time of 3:21.62, which was more than a second faster than the Seminoles and registers as the ninth-best time in the country this season.