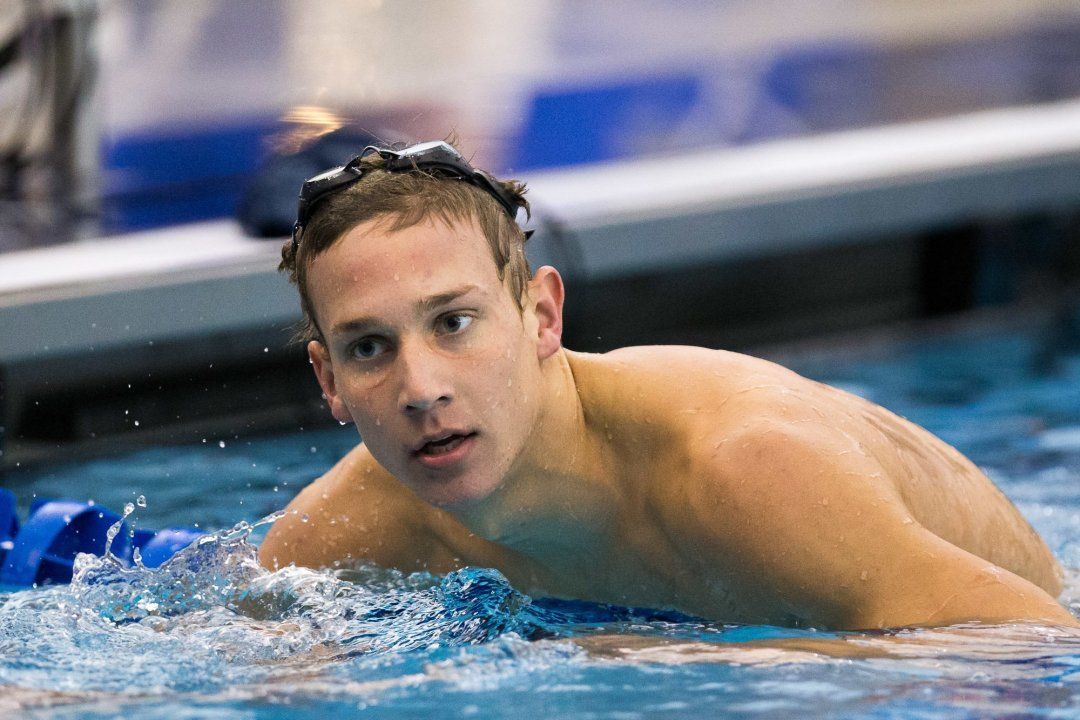 Caeleb Dressel turned in an Olympic Trials cut in the 100 fly, helping UF to a big victory over FSU. Archive photo via Tim Binning/TheSwimPictures.com

It’s been awhile since the NCAA season has had some dual meet action, but Florida and Florida State tangled today in a long course matchup in Gainesville.

Georgia-Mae Hohmann had a spectacular day, helping the Gator women to a hefty victory with three big individual wins and a relay win to boot. She notched Olympic Trials cuts in the 100 back (1:02.72) and 200 back (2:13.06), and while she’s from England, that’s still a testament to her speed at this point in the season. Hohmann also won the 200 IM (2:20.24) and led off the winning 400 medley relay.

Florida got double wins from the likes of Taylor Katz, Lindsey McKnight, and Natalie Hinds. Katz swept the butterfly events, while Hinds stuck with her signature sprint freestyles.

McKnight, meanwhile, took both the 200 free (2:05.01) and 400 free (4:22.52). Notably, McKnight just this summer suffered broken bones in both legs after an accident while on vacation. She’s back, though, and swimming fast now.

Thielmann headed right into the 200 free next and grabbed 5th, then went on to put up the 2nd fastest 400 time behind her teammate McKnight.

Caeleb Dressel and Jan Switkowski each were faster than the Olympic Trials standard on the day as the Florida men also rolled the Seminoles.

Dressel took first in the 100 fly (54.18) to clear the OT standard of 54.79, which is about two seconds short of his best time in the event from this summer. That would be his only individual win of the day. Connor Kalisz took out the 100 back a second faster than Dressel, and while the Florida sophomore took it back stronger in the second 50, Kalisz grabbed the win at 57.95 over Dressel (58.40).

Though he didn’t contend the event individually, Dressel did put up a solid 50.19 anchor leg on the winning UF medley relay.

The Gators wouldn’t be jostled by that, though. Switkowski, who is Polish and the defending World Championship bronze medalist in the event, touched first in the 200 fly (2:01.30) to dip under the Trials standard. He also collected a win in the 400 free (4:01.54).

Great swims in men’s 1500 and women’s 800, also back events. As a breaststroker with high expectations I guess, I have to say those winning times are less than stellar. Is this division I? Just curious.

Yes, this is D1; after a 2 hour morning practice and weights for both teams. Autunm Finke swims for the Gators and Summer Finke swims for the Noles. Tech suits were not warn, just your favorite practice suit. These coaches are using the excitement of College Dual Meets to get ready for the Trials. You want stellar, wait for the Big Show.

Obviously Florida did not have their swimmers swim their best event lineup. Caeleb Dressel for one has already been 51.88 in the 100 breast this year. Also, let’s not forget that they are in the middle of the some of the most intense training of the year and they are tired.

0
0
Reply
A
Reply to  Snowflake

Division 1, yes. Florida isn’t known for producing breastrokers. Kind of ironic, because they are pretty solid in the IM’s in the past decade. Could simply be bad recruiting.

Jess Thielmann had a pretty tough double. The men’s 1500 was moved to later in the meet, so she had to get out of the pool and immediately up on the blocks again after winning the 800 to swim the 200 free.

I look forward to seeing how they progress for the Auburn dual (which will also be LC) towards the end of the month. It’s always a fast meet.

I have heard of the UF staff putting the swimmers through training the day of a meet. That seems self defeating to me.