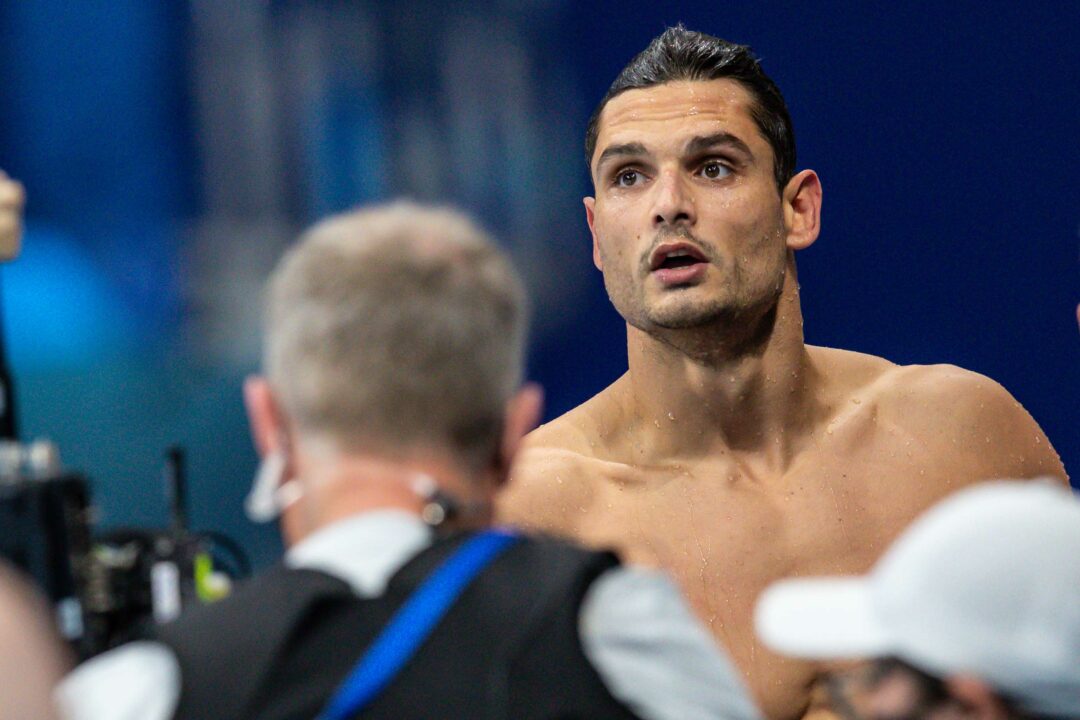 Florent Manaudou, a three-time Olympic medalist in the 50 free, says that he will give Paris 2024 a shot with the desire to swim in his home nation. Archive photo via Jack Spitser/Spitser Photography

The 30-year old CN Marseille trainee said after his podium finish on Sunday that he plans to continue training toward the next Olympic Games, which at 3 years away is a shorter distance than the usual 4 year interval.

“I want to do the Games in my country, I don’t yet know the level of performance that I will have but I want to do the Games with the public, to share all my years of practice and happiness with the French public,” Manaudou said. “We will see what the result will be, happiness will certainly be elsewhere in Paris, but I would obviously like to bring back a medal, it is the ultimate goal.”

The next Olympic Games will be hosted in Paris in Manaudou’s home country of France, which Manaudou has alluded to gives him an extra motivation.

Manaudou won gold in London in 2012, silver in Rio, and silver again in Tokyo. With his Sunday swim, he becomes just the 2nd swimmer to medal in three consecutive Olympic Games in the 50 free, after Gary Hall, Jr., who went silver-gold-gold in 1996, 2000, and 2004, respectively.

The 6’6″ Manaudou, who is built more like a linebacker than a swimmer, will be 33 by the time the Paris Games kick off in July 2024. While that would make him among the oldest swimming medalists in Olympic history, male sprinters especially have shown the ability to perform into their 30s at recent Olympics. In 2016, Anthony Ervin won gold in the 50 free when he was 35 years old. On Sunday, the man who finished one spot behind Manaudou was Bruno Fratus, who at 32 is the oldest swimmer to win his first Olympic medal.

Manaudou walked away from swimming after the 2016 Olympics to pursue his dream of playing professional handball. By 2019, however, he announced that he was ready to return to the pool, in part motivated by the International Swimming League format that he says reinvigorated his passion for the sport.

I think he can do it, ALLEZ LES BLEUS

I was also really surprised that Manaudou had a 47.5 relay split in him. That’s on par with some of his career best relay swims, and he doesn’t seem to swim it very often with his dominant emphasis on the 50; other guys his age who are more that style (i.e. Bruno Fratus) seem to be losing their ability to throw down a solid 100.

Yes he can still aim for the podium in Paris.
It is so rare for our swimmers to compete in major international competition at home(as you know, dear american friends) that such an opportunity must be seized.
We will still lack the tank to achieve performances like in London 2012 but if a youngster wins a title in Paris, it would be great ! Our new French team coach has a lot of work ahead of him!

Why the hell not? Father Time has been very kind to Flo. If anyone could pull an Ervin, it would be him.

Will we have spectators in Paris ?
I just want normality again.
I don’t like this new world

Honestly, that’s a reasonable question at this point.

So does Brent Hayden.

The 6’6″ Manaudou, who is built more like a linebacker than a swimmer

Eh, his waist too tiny for that. Tho I do wanna know what he weighs, estimates online are from like 210 to 240, lol.

Also you said he won silver in Tokyo in the first paragraph and bronze later near the end.

Manaudou is still probably the biggest dude in swimming, or at least one of. That 240 LB listing was from ISL 2019 right when he started his comeback, and I think he’s probably lost a bit of extra weight since going back to swimming full-time. And there is no way he’s just 210, that has to be a measurement closer to London 2012. My guess is 225-230.

You wanna know what guys are legit built like linebackers? The two Brazilian breaststrokers, Felipe Franca and Joao Gomes. If I ever saw those guys on the street I’d never guess they’d be swimmers!

Oh don’t get me wrong Manaudou is a massive dude but just not in a way that would make a good linebacker imo.

And very true re:Brazilian breaststrokers, those guys are like bowling balls. I’d for sure pick them v early if drafting a swimming football team.

He won silver in Tokyo

8
0
Reply
Unbelievable at the end
Reply to  Ragnar