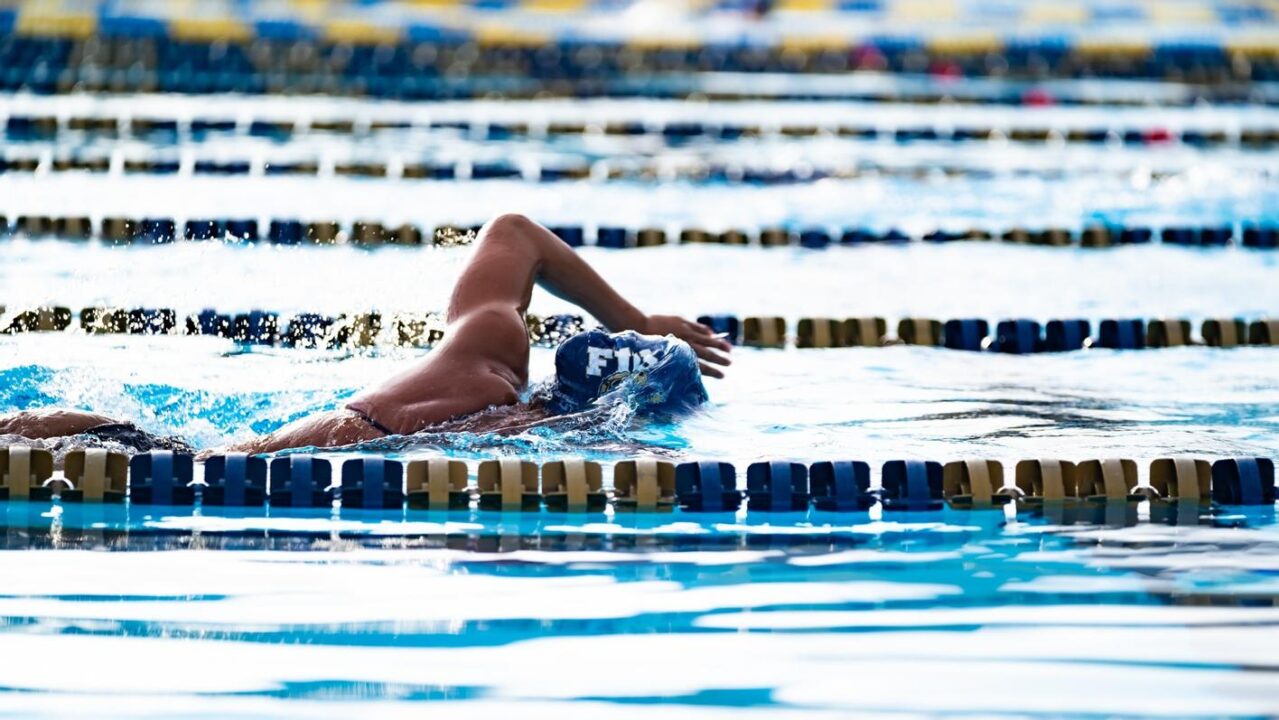 It was another clean sweep for FIU in the relay and dive events. Gouda took first in both the 1-meter (290.78) and 3-meter dives (296.55) with the Panthers also securing third in both events. FIU also took first and second in the 200-medley and 400-free relays.

At the first break FIU held a strong 94-55 advantage after winning six of eight events.

In the 1-meter dive, Gouda captured the top spot with fellow graduate student Serena Buchwald placing third with a 247.65.

The Panthers dominated the 100-free and 200-breast.

The divers closed out their day with a strong showing in the 3-meter with Gouda finishing first and senior Raquel Mason taking third with a 239.93.

The day ended with another emphatic relay win as the team of Chue, Curthoys-Davies, sophomore Jessica Shpilko and senior Lamija Medosevic won the 400-free relay with a time of 3:28.26.

UP NEXT
FIU closes out the regular season on Saturday January 28 when they host cross-town rivals FAU. The meet is set to start at 11 a.m. at the FIU Aquatic Center at the Biscayne Bay Campus.

FGCU falls to .500 on the year at 4-4 after completing a grueling three-match stretch against Miami, Houston, and FIU. The Panthers improved 5-2  and also extended their current win streak over the Eagles to six meets.

“Very proud of how we approached today,” said FGCU head swimming and diving coach Dave Rollins. “Bouncing back from our meet on Friday, we competed very well and saw a significant improvement in not only our times but also our mindset and competitiveness. Reese earning her first zone score of the season, Cam, Lucy, and Emma earning wins was huge, but we saw great improvement all around. Excited to see it today and cannot wait to celebrate our seniors next week.”

In diving, senior Reese Wakefield (Guelph, Ontario, Canada/Bishop Macdonelle CHS) held her own against a proven Olympian from Egypt. Maha Gouda was the first Egyptian female to qualify and compete in the 2016 Rio Games.

Gouda won both the 1-meter and 3-meter diving events Wednesday, while Wakefield’s performances in both were good enough for second place on the podium. Wakefield posted a 271.28 to Gouda ‘s 290.78 in the 1-meter and had a 275.48 effort to the Olympian’s showing of 296.55 in the following 3-meter dive. Wakefield’s 1-meter score qualified herself a spot in the NCAA Zone Diving Championships in March in Knoxville, Tenn.

FGCU began the day with a silver in the 200-yard medley relay. In total, FGCU would capture seven silver medals and six bronze to accompany its three wins against the Panthers.