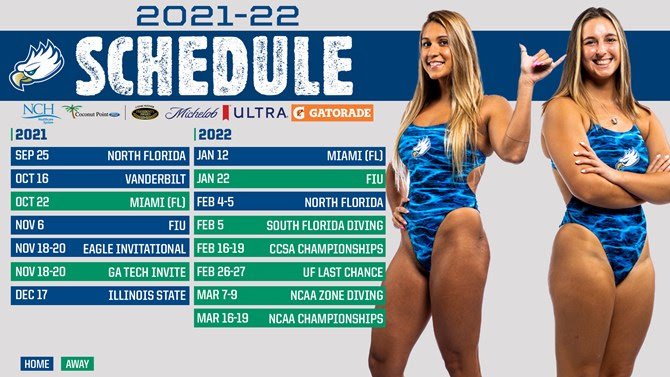 The campaign will kick off in less than a month as the Eagles open with a meet at North Florida on September 25. Current photo via FGCU Athletics

Fort Myers, Fla. – After competing in an abbreviated schedule in 2020-21, FGCU women’s swimming and diving head coach Dave Rollins announced a full schedule for the 2021-22 season on Thursday. The campaign will kick off in less than a month as the Eagles open with a meet at North Florida on September 25.

“We are excited to get back to a more normal season set up,” said Rollins. “Being able to compete in the fall was the one thing we missed out on the most last year, and is vital to our performance as the season progresses. We are excited to welcome fans back to the Aquatic Center this year as well and cannot wait to get started!”

Following the season opener, the Eagles make their home debut on October 16 against Vanderbilt. After facing the Commodores, FGCU gets back on the road to take on Miami (Fla.) on October 22 before returning home to host FIU on November 6.

The Eagle Invitational returns for a second consecutive season as FGCU will host Georgia Southern and North Florida over a three-day stretch from November 18-20. During those same three days, a few Eagles will travel to Atlanta to take part in the Georgia Tech Invite.

The Green and Blue will be back at the FGCU Aquatics Complex one final time in the fall when it hosts Illinois State on December 17.

When the Eagles return to campus in 2022, they will open the spring semester with a home meet against Miami (Fla.) on January 12 before traveling to FIU on January 22.

On February 4, FGCU will celebrate Senior Day when it hosts North Florida. The Eagles will continue their meet against North Florida the next day while the divers will head to the South Florida Diving Invite in Coral Springs for the fourth-straight season.

The CCSA Championships will be held from Feb. 16-19 in Lynchburg, Virginia, hosted by Liberty. FGCU, which has won ten conference titles since 2009, will look to win its second consecutive conference title after sharing the championship with Liberty a season ago.

Those on the verge of qualifying for the NCAA Championships will compete at the Last Chance Meet hosted by Florida from Feb. 26-27. The Eagles that punch their tickets will advance to the national championship in Atlanta, March 16-19. The NCAA Diving Championships will also be held in Atlanta and run from March 7-9.