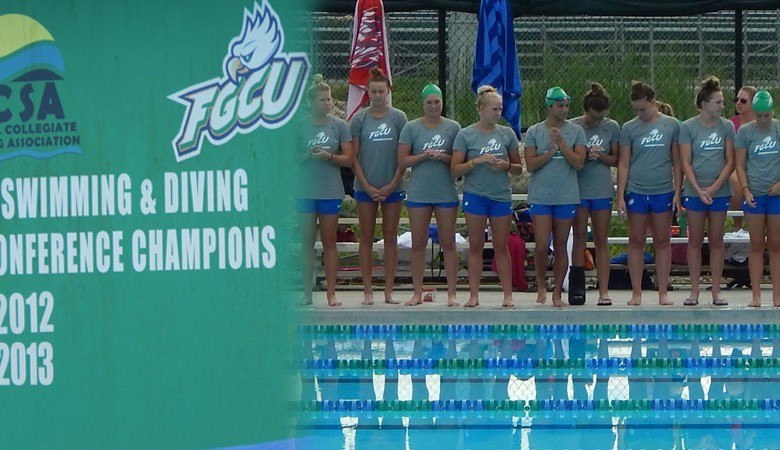 The Florida Gulf Coast Eagles, who have won 5 CCSA Conference Championships in six years of existence, began their 2013-2014 campaign with what could be their best team yet on Saturday, topping North Florida 143.5-94.5 at home. This will be the only home meet of the fall semester for Florida Gulf Coast.

They began with the 200 medley relay, which is perhaps their best shot at getting a relay qualifier to NCAA’s, which won in 1:46.88. They have some options on how they want to roll up this relay, but for now they’ve put the more versatile Emma Svensson on the backstroke leg, where she split 26.51, and Dutch freshman Kira Toussaint (who is primarily a backstroker) on the fly leg.

Another freshman, Evita Leter, was 29.70 in the 5 breast, and Christina Tanninen anchored in 25.03. Tanninen, as the only senior on this relay, will be a key to their qualification; the Eagles need to get that anchor leg down to a 23-low, at least, to have a shot at NCAA’s.

Leter topped Tanninen in the individual 50 free by margin of 24.88-25.08 (though Tannine’s swim there was much better). A pair of North Florida freshmen, Lauren Hall and Mariana Paula, were 3rd and 4th in that race in 25.2’s.

Another option for that anchor leg could be Lindsey Meeder, who seems to be really finding her speed early this year. She won the 100 free on Saturday in 54.21: her best time as a college swimmer, and within a tenth of her best time ever. She was out in 26.10, so despite focusing mainly on the distance events last year, we could see a shift for her in 2013-2014.