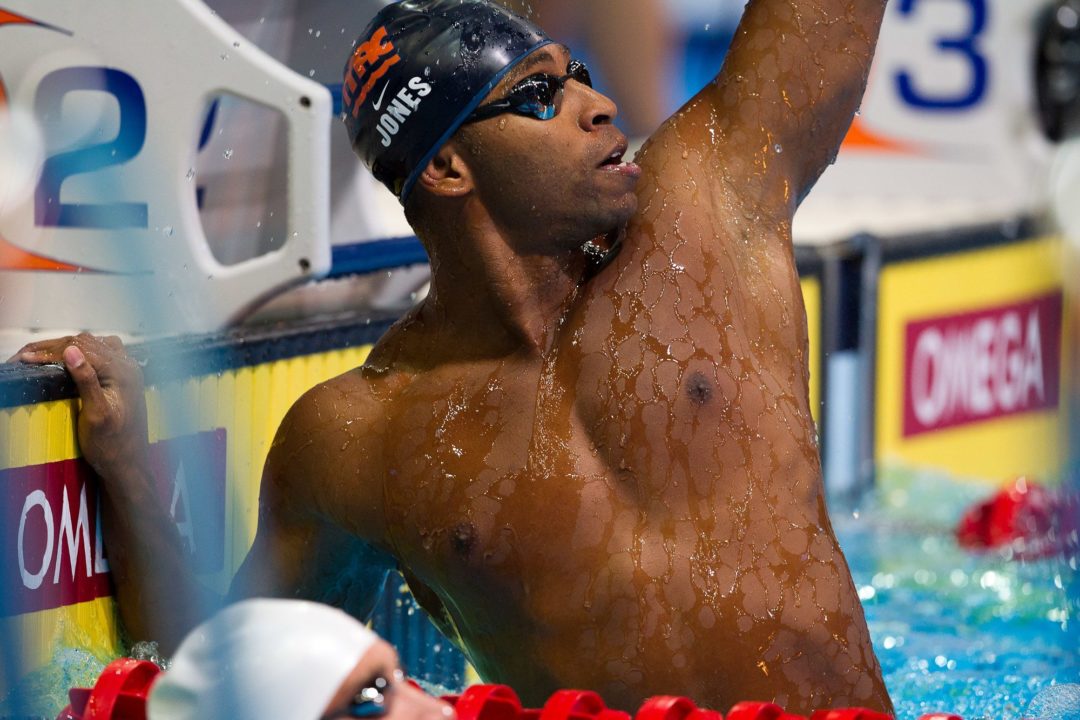 Cullen Jones: “It has always been a dream of mine to bring the sport of swimming to a broader audience. The CJDI is designed to help support – and encourage – diversity in swimming by bringing together kids of all backgrounds and giving them the chance to compete in an elite event, all while raising money to support this important cause. It’s going to be a terrific event!” photo via Tim Binning/TheSwimPictures.com

This announcement for media, swimmers and fans is courtesy of Cullen Jones Diversity Invitational.

After nearly drowning at the age of five, Jones has worked throughout his career to help reduce the drowning rate among minority youths in the U.S., sharing his personal experience as part of the USA Swimming Foundation’s “Make A Splash” initiative and as the face of Speedo’s “Learn to Swim” program and associated product line.  Building on Jones’ mission, the Cullen Jones Diversity Invitational was created as a multi-ethnic, world-class swim meet focused on competition, education and fundraising to celebrate diversity and help grow the sport.

“It has always been a dream of mine to bring the sport of swimming to a broader audience,” Jones added.  “The CJDI is designed to help support – and encourage – diversity in swimming by bringing together kids of all backgrounds and giving them the chance to compete in an elite event, all while raising money to support this important cause.  It’s going to be a terrific event!”

Swimmers ages 8-18 will compete in a maximum of four individual events per day plus relays at the CJDI; point scoring will be on an eight-place basis with ribbons awarded to the top eight finishers in each individual event and top three finishers in the relays.  Top male and female high point award winners will be named at the end of the meet.  All entrants will be outfitted in custom Speedo / Cullen Jones Diversity Invitational swim caps.

With a focus on community and education, the Cullen Jones Diversity Invitational will also include a Parents Seminar, hosted by Cullen’s mother, Debra Jones, as well as a Coaches Social, where coaches can come together to learn about swim safety and discuss ways to help grow and expand diversity within the sport of swimming.  An evening party on Saturday, Oct. 12 will encourage swimmers to interact and meet new friends; Jones and other special guests – including some of Jones’ Olympic teammates – will sign autographs for meet participants and fans.

Money raised through sponsorships to the Cullen Jones Diversity Invitational will go to support various 501c3 organizations that focus on diversity, including swim clubs that promote diversity, programs that emphasize the importance of a healthy and active lifestyle, and organizations that demonstrate a steadfast commitment to diversity and inclusion.

Jones joined Team Speedo earlier this year, signing a multi-year agreement with the brand through 2017.  Dedicated to the swimming community across all levels, Speedo’s partnership with Jones and the Cullen Jones Diversity Invitational furthers the brand’s ongoing commitment to the grassroots growth of the sport.

WHAT:   On Tuesday, October 8th, just prior to the first-ever Cullen Jones Diversity Invitational, four-time Olympic Gold Medalist and event host Cullen Jones will hold a media availability to discuss the inaugural swim meet and his mission to celebrate diversity in swimming and promote the sport among minority communities.  Jones will also be available to answer questions about his experience at the 2012 London Olympics and his ongoing training at SwimMAC.

Is there an invitation swim meet for 2014? I would really like my nephew to be exposed to the higher level of minority swimming. He is the captain of his competitive swim team at MLK High school, in Atlanta, GA, a 16 year old life guard himself, he’s already saved someone from drowning while on the job, and he had a cousin drown a while ago. I really think he should be exposed to this level of the importance of swimming for minorities.