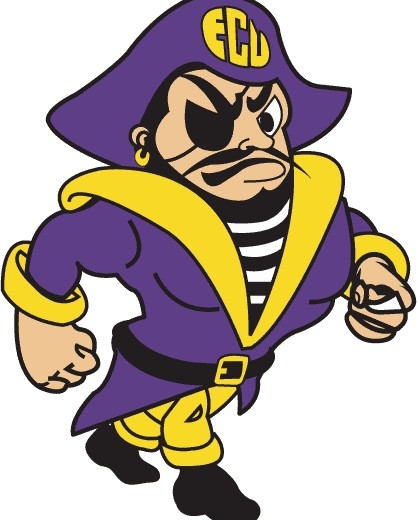 "I'm very pleased with our performances this weekend," Pirate head coach Rick Kobe said. "We had some outstanding swims and I'm very excited about the season ahead. We've got a very fast group and should have another outstanding year."

The East Carolina men and women’s swimming and diving teams both finished second at the Second Annual All-North Carolina Invitational at the Greensboro Aquatic Center. As a team, the Pirates (1360) wrapped up the two-day event second behind NC State (1449.5) in the men’s meet. On the women’s side, ECU (1464.5) finished as runner-up, again behind NC State (1566).

The men’s team finished 488 points ahead of third-place Wingate, while the women’s squad cleared Davidson by 584 points for second-place. Eleven teams from around the state competed on the men’s side with 14 teams participating in the women’s meet. After winning six events on Friday night, the Pirates captured four events Saturday and tallied a total of 18 medal finishes.

“I’m very pleased with our performances this weekend,” Pirate head coach Rick Kobe said. “We had some outstanding swims and I’m very excited about the season ahead. We’ve got a very fast group and should have another outstanding year.”

Sophomore Bailie Monahan (2:03.15), who tied for first in the 200 IM Friday, posted her second individual win of the meet by winning the 200-yard butterfly as ECU finished one, two, three in the event. Juniors Danielle Morrin (2:04.39) and Lauren Gray (2:04.90) placed second and third, respectively.

ECU won half of the backstroke events Saturday with senior Anna Gibas claiming the women’s 100 title in a time of 56.79 and senior Attila Kiraly (1:50.40) capturing the men’s 200 by 0.65 over Queen’s Matt Josa for his eighth career victory in the event.

Junior Rokas Cepulis recorded his second win of the meet by touching first in the 200-yard breaststroke with a time of 2:01.70. He earned first-place in the 200 IM the night before. Cepulis (56.38) missed sweeping the breaststroke events by 0.33, finishing second in the 100 to Duke’s Hunter Knight (56.05).

Freshman Adam Dear and sophomore Delaney Fox each registered a bronze medal finish. Dear placed third in the men’s 200-yard butterfly as did Fox in the women’s 1650-yard freestyle.

Along with the swimmers, ECU got four strong performances on diving board. In the women’s three-meter dive, senior Colleen Jones earned second-place with 258.45 points and freshman Ashley Sams finished third with 253.10 points. Additionally, sophomore Alex Clark placed second in the men’s one-meter event with 217 points followed by freshman Will Beliveau in third with 210.60 points.

ECU opens it dual meet season Saturday, Oct. 12, against Davidson. The meet is scheduled for a 1 p.m. start on the Davidson College campus.

This release was provide to swimswam by East Carolina swimming and diving.