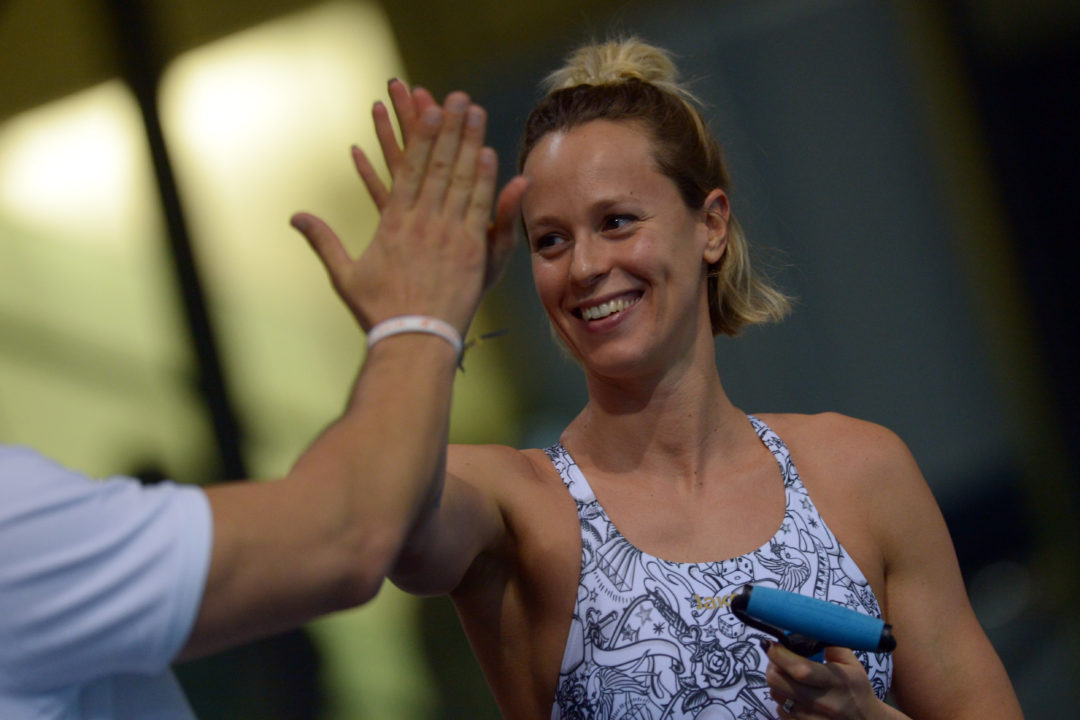 Italy's queen of swimming, Federica Pellegrini, auctioned off 59 items to raise money for the hospital in Bergamo, an epicenter of the coronavirus outbreak. Archive photo via Gian Mattia D'Alberto/LaPresse

The live auction of Olympic gold medal-winning swimmer Federica Pellegrini raised 66,050 Euros ($72,439) for the hospital in Bergamo, Italy, that is at the front line of that country’s coronavirus outbreak.

The biggest-ticketed item in the auction was 4 large, signed, photographic panels (about 1 meter each) made from photos of Giorgio Scala’s Deepbluemedia photography agency, which fetched €9,900 ($10,861). Swimming items generally outdrew her clothing worn as a judge on the television show Italia’s Got Talent, though a jacket from that show did fetch €3,400 ($3,340).

Among the top competition items, the warmups outfit that Pellegrini wore to win gold at the 2019 World Championships earned a top bid of €5,100 ($5,595), which is more than the suit that she wore in the actual competition, which went for € 1,100 ($1,206). The Swedish-style goggles she wore when she won Olympic gold fetched €4,550 ($4,991). When compared to the original price of the goggles that was probably less than $10, that’s an incredible valuation.

Items that sold for the highest values:

Pellegrini is a major celebrity in Italy, partially for her swimming accomplishments that include 7 World Championships, a 2008 Olympic gold medal, and a record-setting 7 straight medals at the long course World Championships in the 200 free. Her star has grown from there with big mainstream presence that includes as a judge on Italy’s Got Talent: a role she’s held since 2018. Her reach includes over 1.1 million followers on Instagram.

Pellegrini announced the auction on March 30th that she would auction off several pieces of memorabilia to benefit the hospital in Bergamo, which is Italy’s hardest-hit city. Bergamo has over 10,000 confirmed cases of the coronavirus and 2,200 deaths. The city has been home to many stories of doctors having to choose which patients to try to save from the disease and which to let die as bodies pile up in makeshift, unrefrigerated morgues.

The auction comes as Italy, one of the world’s hardest-hit countries during the global coronavirus pandemic, received news of a possible light at the end of the tunnel: the Sports Minister hinted that, if social distancing continues until the new May 3rd target, some elite sport training and competition (including swimming and soccer) could return on May 4th.

Pellegrini is one of a number of elite swimmers around the world who have made significant contributions to the coronavirus relief efforts. A raffle for Adam Peaty’s gold-medal-winning suit raised over $16,000 for the effort in Britain, while Katinka Hosszu and her Team Iron donated $4,500 to the efforts.

Raffle tickets are still being sold to support the fundraising effort by American swimmer Nathan Adrian, which includes memorabilia from several of his US National Team counterparts, and for a race-worn cap and goggles signed by the most decorated Olympian in history, Michael Phelps.

Correction: a previous version of this article misstated the total raised.

Agree. And maybe it’s a nostalgia factor, but I’m increasingly hopping on the FP train these days.

Filippo Magnini and Luca Marin have entered the chat.