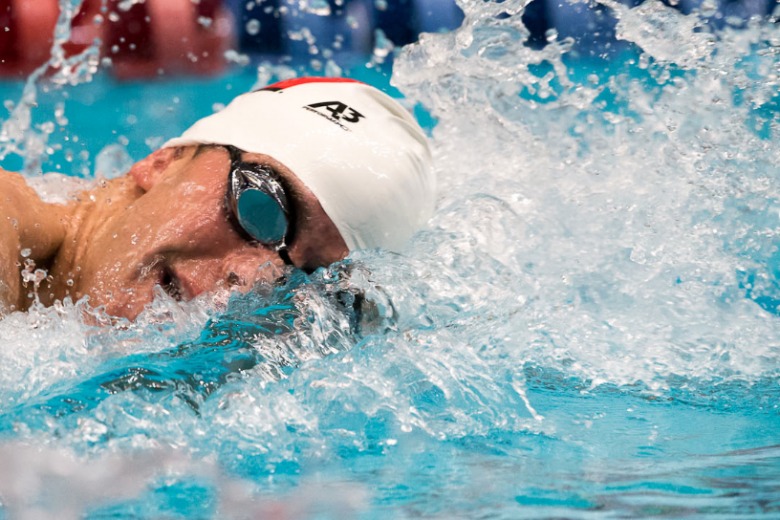 The final night of the World University Games pool events in Kazan, Russia started out with fast and furious with three straight new games records and three top five times in the world.

Olympic silver medalist Aleksandra Herasimenia of Belarus took the 50 freestyle in a time of 24.48. Herasimenia’s time beats her own games record of 24.62, which she set in 2009 in the shiny suit era. Her winning time is currently the fourth fastest time in the world this year and is only two tenths of a second off her lifetime best of 24.28 that she swam in London this summer.

This concludes a very successful games for Herasimenia who adds the 50 freestyle title to the 50 butterfly and 10o freestyle victories she had earlier in the meet along with finishing collecting a silver in the 50 backstroke.

Anna Santamans of France finished second in a time of 24.81, which puts her in ninth position in the world rankings. Santamans time is also a lifetime best improving on her previous best of 24.81.

American Megan Romano, who has had incredible performances in both the 4 x 100 freestyle and 4 x 200 freestyle relays, collected her first third individual medal of the games finishing in a 24.98, breaking 25 seconds for the first time in her career. Romano’s previous lifetime best was a 25.12, which she posted in May at the Charlotte Grand Prix.

In the two events where Russian Vlad Morozov did not end up on top of the podium there was a stunned silence in the crowd. That was not the case in this evening in the men’s 50 freestyle. Morozov pleased the home crowd winning the event in a time of 21.67, breaking his own games record of 21.81 which he set in the semi-finals. He also swam a lifetime best (by under a tenth), showing that he’s continuing to march down toward the World Championships in Barcelona now with the 5th-best time in the world. That’s his fourth individual medal of the meet so far, including the title in the 100 free and silvers in the 50 back and 50 breast.

His countrymate Andrey Grechin wasn’t able to go faster than he was in the semi-finals, but was still good enough to hold off a good field for silver with a 22.10. An Eastern-European sweep came as the Ukraine’s Andrii Govorov took 3rd in 22.17, just out-touching Australia’s Andrew Abood, who was 4th in 22.18.

A third sprint event on Tuesday evening, and a third Meet Record, as Russia’s Yulia Efimova swam a 30.12 to get under the 30.67 set by the Czech Republic’s Petra Chocova in prelims.

Efimova, after now sweeping the 50 and 100 breaststrokes, looks like she’s the only one with the potential to head off the steam-engine that is Lithuania’s Ruta Meilutyte at the World Championships.

Chocova, meanwhile, was never able to get faster than she was in the prelims, and wound up taking silver in 30.99. Russia’s Valentina Artemeva was 3rd in 31.39, just out-touching Ireland’s Fiona Doyle, who was 31.40 for 4th.

Ukraine’s Mariia Liver took 5th in 31.44, Canada’s Tianna Rissling was 6th in 31.56, and the two Americans Emily McClellan and Laura Sogar bringing up the rear in 7th-and-8th place respectively.

Canada’s Katerine Savard led by over a second going into the last 50 meters, but fell to 4th by the final touch in 2:11.02 (and almost 5th, as Australia’s Amy Smith was 5th in 2:11.07. Out of her two events, Savard’s biggest chance to medal at the upcoming World Championships seems to be the 100, as her sprinting has looked much better at this meet than her 200 fly has.

There were no Americans in the final of this 200 fly.

After a one-event hiatus, the Record-breaking track resumed, with American Michael Weiss breaking the mark in the 400 IM with a 4:12.00. The old record was set at the 2009 meet by Poland’s Mateusz Matczak in 4:12.28; until this year, that 2009 meet was the best meet in the history of the event.

It’s clear now that Weiss has saved his taper for this meet instead of the World Championship trials two weeks earlier, where he was only a 4;15-high, but both swims were lifetime bests for him and he now ranks 7th in the world, and had he done that time in Indy would have knocked off Tyler Clary for a spot on the World Championships roster.

Japan added another medal on this last day with a silver from Takeharu Fujimori, and Great Britain’s Lewis Smith earned bronze in 4:16.86. Fujimori was the top seed after prelims, but times dropped drastically (6-7 seconds) into the final).

Canadian Alec Page took 4th in 4:18.56, making up a lot of ground on a good freestyle leg, and Ukraine’s Maksym Shembrev was 5th in 4:19.44. Russia’s Semen Makovich, just a few days off of his European Junior Championship in the same event in Poland, was only able to get 6th in this race at 4:19.73, showing the fatigue of travel.

Italy’s Federica Pellegrini has vowed to return to the middle-distance freestyles next year, after a backstroke sabatical in 2013, but when she gets there she might see more competition than when she left. 21-year old Martina de Memme added a second victory by knocking two-seconds off of her lifetime best in this women’s 400 free. Her winning time was 4:07.69.

De Memme has been riding behind Pellegrini as #2 in the Italian middle-distance freestyle group for a few years now, but with this time officially becomes the third-fastest Italian woman in the history of the event. Keep in mind that this is the swimmer who had to be carried off-deck on a stretcher after winning the 800 freestyle just one day prior.

Brittany MacLean from Canada just missed the podium with a 4:08.95, but she finished her race very well (the best last closing 50 meters in the field). Her countrymate Savannah King was 5th in 4:10.48.

The Russian women kept their hot-streak alive, taking a 2nd relay victory and a 2nd Universiade Record with a 3:58.04 in the women’s 400 medley relay. That included a 59.88 leadoff from Anastasia Zueva, a 1:05.5 split from Yulia Efimova, a 58.2 butterfly leg from Veronika Popova, and a 54.3 anchor from Viktoriya Andreeva.

That time is two seconds away from the one that the Russians used to finish 4th at last year’s Olympics, though still a good result with the injuries they’ve had and with a shift in the lineup after the absence of 32-year old Irina Bespalova, who was the fly leg in London. The best Russian relay might include 16-year old Maria Baklakova, who swam at Euro Juniors last week, and was splitting 53-second freestyles on relays.

The Italians finished off a meet that started rocky, but ended well, with a 4:02.61 for silver. That’s right on what they went at last year’s Olympics, and included a surprisingly-good anchor of 54.48 from Erika Ferraioli, who has never been better than 55.3 on a flat-start.

They had Vlad Morozov lead off in 53.99, which was probably a necessary move, but didn’t get them much separation from what was a very deep backstroking field.

Kirill Strelnikov had a good split of 1:00.06, but the Russians remained behind the Japanese after Yasuhiro Koseki split 59.7 on his breaststroke leg.

The Americans were creeping up, though, with a very good breaststroke of their own from Mike Alexandrov (59./67), and some near-perfect exchanges lept them into the lead when Kyler van Swol had the fastest butterfly leg of the final in 51.74.

It came down to the sprinters at the end, though, as only half-a-second separated those top three teams at the last exchange. The weakest part of this American roster has been the sprint freestylers, and that has been where the Russians have shone.

It wasn’t his best swim, but Andrey Grechin split 48.36 to pull the Russians back into the lead ahead of Japan and a 48.71 from Katsumi Nakamura for the win.

Full Medal Table At the End of the Pool Swimming

The medal table below includes full results, and those separated by gender.

Day 6 evening session. Jack Conger in the 200 back at 1h04. Unfortunately not the relays.
http://www.youtube.com/watch?v=P5UGf5iBY1k

21.67 for Vlad Morozov is a good time after all his races of the week. If he drops the useless backstroke and breaststroke races from his schedule, he will easily swim under 21.50.
Great silver medal for Anna Santamans in the 50 free! First medal for France! 🙂
Still a very productive day for Miss Romano. Bronze medal in the 50 free with a first sub 25 for her. And again, a great relay split in the 4X100 medley.
Efimova has shown great speed this week.

If done at Trials, that time would’ve put Romano ahead of Manuel in the 50, no?

i wished they left the dope behind in Russia

I think you mean 400 Medley Relay for men instead of 400 Free Relay.

Great job for Michael Weiss in the 400 IM!

Surprised they didn’t anchor toomey with how well he was swimming the whole meet.