Ever-Consistent Irie Hits 1:55 200 Back To Close Out Japan Swim 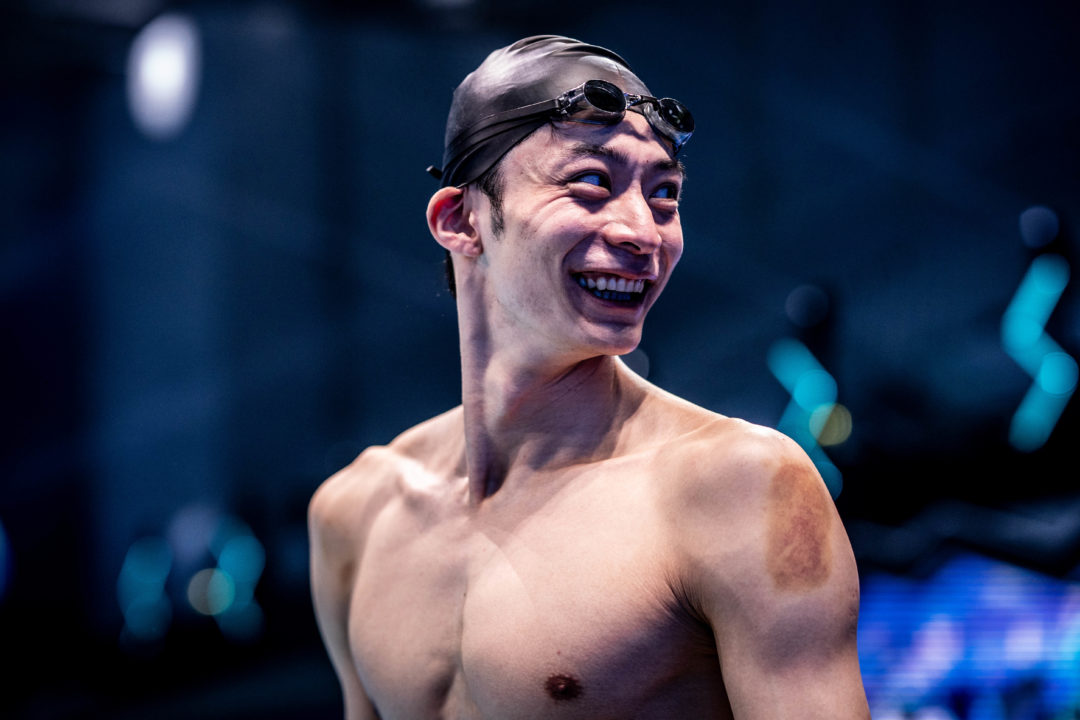 The 2020 Japan Swim concluded tonight in Tokyo but not before 30-year-old Ryosuke Irie put up another beautiful performance in the men's 200m back. Archive photo via Mine Kasapoglu for ISL

In addition to the heard-turning battle which transpired in the men’s 200m breaststroke to close out this 4-day 2020 Japan Swim, several other races kept the competitive spark going in Tokyo on this final day.

29-year-old national record holder Shinri Shioura made some noise en route to winning the men’s 50m freestyle, clocking the only sub-22 second time of the field. After snagging the 2nd seed in 22.34 this morning, Shioura made it happen tonight in a mark of 21.96, beating out the next closest competitor of Kosuke Matsui who touched .11 later in 22.07.

Rounding out the top 3 was Koshiro Sakai in 22.33, which rendered former national record holder Katsumi Nakamura off the podium at this non-selection meet in a time of 22.34.

Shioura’s lifetime best and JPN record remains at the 21.67 he produced at this same meet last year, which qualified for the 2019 FINA World Championships There, Shioura became his nation’s first World Championships 50m freestyle male finalist since 2001. He ultimately finished 8th in a time of 21.81.

Putting up the 2nd fastest time in the world this season in the men’s 200m back was 30-year-old Ryosuke Irie.

For perspective, Takehara’s time would rank the teen as 6th fastest American 15-16-year-old all-time in the men’s 200m back event. Come tonight’s final, Takehara wound up 7th in 1:59.91.

Another teen made her presence known, this time in the women’s 100m fly heats, as 19-year-old Chiharu Iitsuka produced a time of 58.82 to land lane 4.

Iitsuka’s 58.82 situates her just outside the top 10 performers all-time from her nation, but easily overtakes her previous season-best of 59.22 from October’s Japan Student Championships.

In the final, however, the seasoned veterans took control, as Ai Soma grabbed gold in 58.47 followed by Suzuka Hasegawa‘s silver medal-worthy effort of 58.74 Yui Yamane rounded out the top 3 in 58.93, while Iitsuka finished in 4th in 59.08.

The marquis men’s 100m fly race did not disappoint, as the top 3 finishers all dipped under the 52-second threshold, led by an unexpected dynamo.

The World Championships silver medalist in the 200m freestyle, Katsuo Matsumoto, logged a monster personal best of 51.66 to not only beat the field here but to get under the 52-second mark for the first time in his evolving career.

Entering this meet Matusmoto’s PB rested at the 52.49 he put up just this past September at the Chiba Prefectural Meet. Tonight, Matsumoto opened in a controlled 24.28 and brought it home in 27.38 to check-in as Japan’s 5th fastest swimmer all-time in the event. Look for a subsequent post on this swim.

Kanako Watanabe found success in the women’s 200m breast, clocking a winning effort of 2:23.15 over Sakiko Shimizu‘s 2:24.97. Watanabe’s previous season-best was represented by the 2:25.05 she produced just last month at the Japan Adult Swimming Championships.

However, the 2015 world champion in this event now rockets up to rank as the 2nd fastest swimmer in the world this year.

I really hope Irie can snag a medal in Tokyo next year. Low 1:55/high 1:54 has been enough to podium at recent major finals, and that kind of time is certainly well within his reach.

I agree. After ISL, Japanese swimmers had to stay at home for 2 weeks from the day they were back to Japan. So, Irie didn’t have time to do training before this Championship. But still produced 1.55mid which is very good! I’m a big fan of Irie. So, really hope he will produce much faster time by the Olympic and get a medal.

He & American Melanie Margalis are not only so consistent, but have winning personalities as well.

Only guy in the world who could break 2:00 with a water bottle on his forehead.