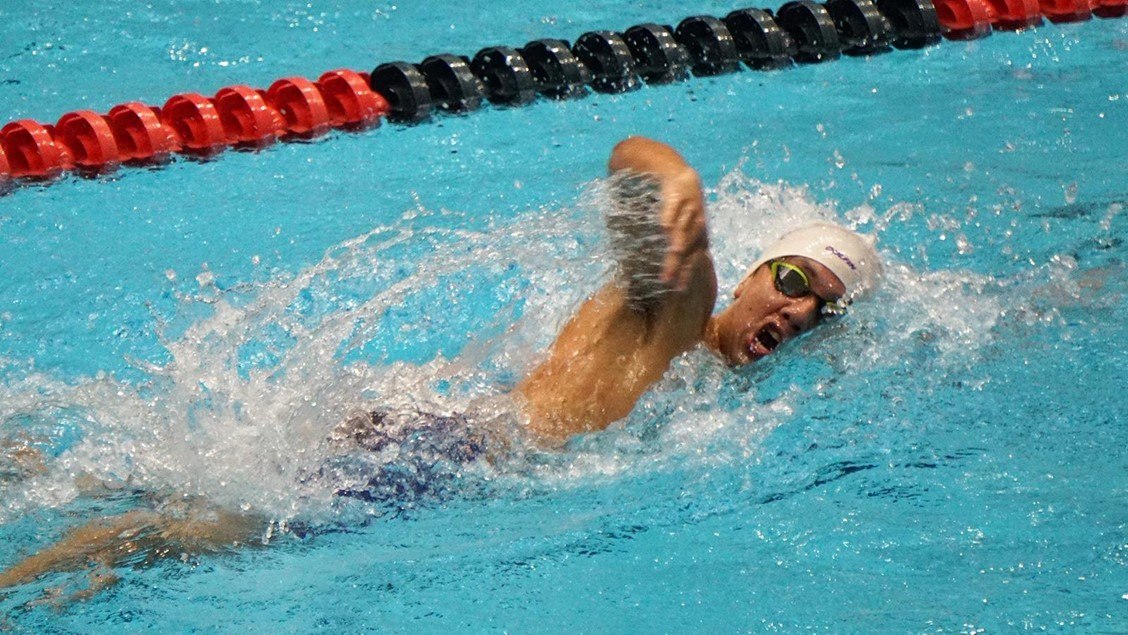 “Tonight was a fun team meet for our men’s team,” said head coach Brent Noble. “They have gone back and forth with Ball State for a long time, so it means a good deal to get a convincing win against a conference rival. Our team performed very solidly across the board, and continue to improve and develop confidence in what we can do at the end of the season.”

The men kicked of the evening with a win in the 200 Medley Relay. Sophomore Credence Pattinson, sophomore Eli James, and seniors Matt Duke and Jared Sutphin together clocked in a 1:35.62.

Hudson, Pattinson, Duke,and Sutphin teamed up to win the 400 Freestyle Relay, ending the evening in a 3:11.99.

The Aces return to Wyttenbach pool to take on Saint Louis on the 26th for Senior Day.

MUNCIE, Ind. – – In a down-to-the-wire finish in the 400-yard freestyle relay, sophomore Drew Weeks turned in the fastest split of the event at 47.35.

While his time fell just short of giving the Ball State men’s swimming and diving program the relay win, it was the type of effort first-year head coach J. Agnew could be proud of Friday night at the Lewellen Aquatic Center.

“Watching Drew’s anchor on that last relay just showed the toughness and tenacity of what our team is about,” Agnew said. “Even though we were behind, he took it out like a freight train and laid it all on the line. While he came up a little short, that’s what we are after right now. In the end, it’s that type of effort that’s going to make a difference.”

While the Cardinals also fell short as a team to visiting Evansville by a score of 188 to 110, there was plenty to be proud of on the night including the program honoring its men’s and women’s senior classes.

“These seniors have been such a force on this team during this transition,” Agnew said. “They have been positive, worked their tails off and I couldn’t ask for more. It’s a hard night. I wish I had them for three more years. While we had an impromptu senior night tonight, we made the most of it, that’s for sure.”

Leading the way individually was sophomore diver Sean Wolfe who captured the top spot on both the 1-meter board (262.13) and the 3-meter board (264.08).

“It’s just consistency with Sean, that’s been the big thing for him,” diving coach Nick Gayes said. “He has a ton of tools, it’s just a matter of putting them all together. Today, I thought he was starting to get in the flow. I thought he had a really good day.”

In the pool, junior Logan Ackley picked up an event win for the Cardinals in the 200-yard backstroke, finishing in 1:56.64 to win the race by nearly a minute. He also took third in the 100-yard backstroke with a time of 54.34.

“Logan has been solid for us all year and his backstroke to get the win was big,” Agnew said. “The divers also did phenomenal job. Overall, it was a great performance and we worked hard. I just wish we were able to turn the score upside down there, but we will.”

In addition to the three event wins, the Cardinals picked up six runner-up finishes and even went 1-2-3 on the 3-meter diving board.

“Right now, we are really optimistic,” Agnew concluded. “We are training great and we’ve seen the times in practice. We know that in five weeks, we’re going to be rested, shaved, tapered and ready for MACs. Watching the races today, I didn’t see a race we can’t win at MACs. We are very excited and looking forward to a rematch with Evansville and a great group of MAC teams.”

Next up for the Ball State swimming and diving program, a rescheduled meet versus Miami. After Saturday’s meet was postponed due to the incoming winter storm, the team’s moved the meet to Tuesday at 5:30 p.m. in the Lewellen Aquatic Center.