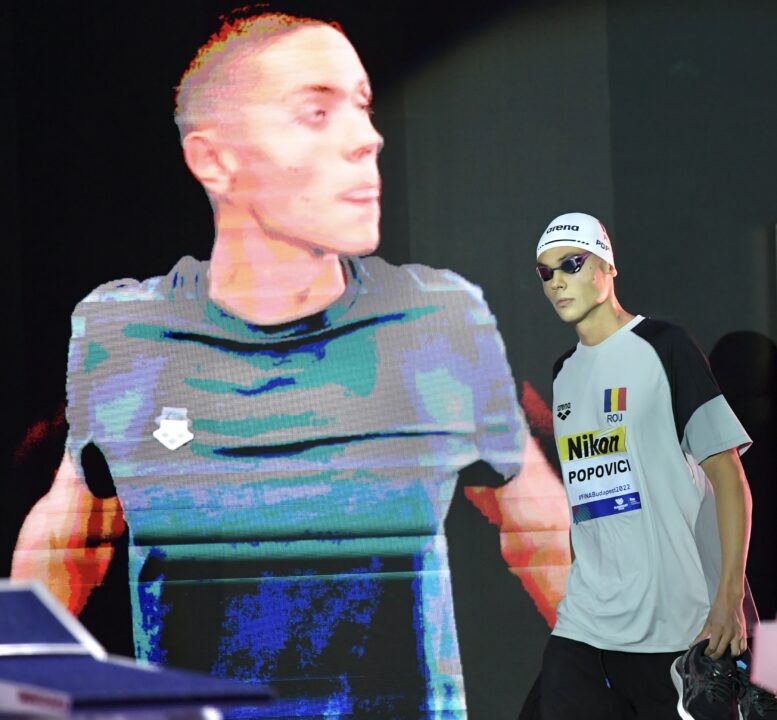 All eyes were on Romania's David Popovici, with the 17-year-old world champion now competing in front of a home crowd at the European Junior Championships. Archive photo via Fabio Cetti

Two-time world champion David Popovici of the European Juniors host nation of Romania is among the group of teenaged racers who made the trek from Budapest to Bucharest to continue their elite racing in pursuit of titles and hardware.

Entering these championships, the 17-year-old freestyle ace said, “It’s very symbolic and important event because it’s the first time Romania gets to host this kind of event, it’s the biggest one yet, ever and I can’t wait to be there, I can’t wait to see the people I can’t wait to hear the crowd roar.

“I hope I can win as many events as possible and have as much fun as possible.”

Popovici got his meet started off right, posting a men’s 400m freestyle relay lead-off of 47.76 in the morning followed by an even quicker 47.54 in the evening. The latter helped edge Romania to the top of the relay podium, with Popovici and teammates Vlad-Stefan Stancu (51.11), Stefan Cozma (50.56) and Patrick-Sebastian Dinu (49.72) collectively clocking a time of 3:18.93, beating runners-up Great Britain by just .08.

On how he felt the Romanian squad fared in upgrading its silver from 2021 to gold this time around, Popovici said, “I think this was a great performance from this relay, and it was fantastic to swim in front of so many people in this pool.

Popovici clocked a super speedy time of 1:43.21 to take the 2free title in Budapest, snagging a new World Junor Record in the process. His semi-final time of 47.13 in the 100m free also nailed a new WJR before the Romanian ultimately struck World Championships gold in 47.58.

The fact that Popovici is already faster than one of his World Championships final times bodes well for the teen who is taking the international swimming scene by storm.

Is he throwing any other events onto his schedule at this meet? 50? 400?