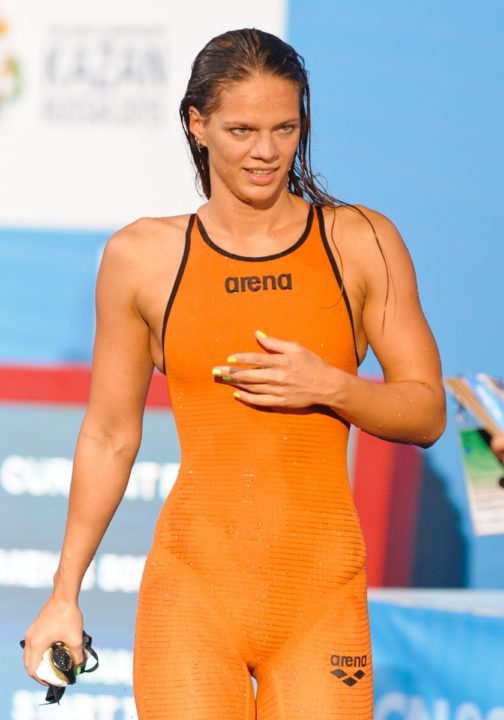 Some final thoughts on day two. Full recap of the events can be found here. A full PDF of day... Current photo via Victor Puig

Some final thoughts on day two.

I am glad I put down the women’s 200 breaststroke as one of the top three races to watch in my preview for this competition, simply because I like being right! What a race!

Yuliya Efimova denied the crowd the joy of watching a Dane win an individual european championship, relegating the long course 200 breaststroke record holder, Rikke Moeller Pedersen, to the second position on the medal podium. It was interesting to see that the race played out in almost the exact same fashion as it did in Barcelona with Pedersen out to a fast start and Efimova taking control in the final 50 meters.

Even though Efimova has superior speed, she has an incredible ability to control the race throughout, which she proved by swimming the final three 50s of her race with no more than four one-hundredths of a second between them.

Efimova now holds the short course world records in the 50 and 200 breaststroke, the battle between her and Ruta Meilutyte, not only for the 100 breaststroke title, but for their place in the record book should be an incredible one.

Mie Nielsen finally gave the crowd what they wanted, a Dane taking an individual gold on home soil. Those in attendance were itching for that medal after watching Lotte Friis and Rikke Moeller Pedersen fall just short of the big prize.

It is great to see a young swimmer who has had to battle health problems consistently at such a young age come up big not only winning the event, but setting a new european record in the process.

I think I went through Hosszu withdrawal watching her swim only one race in the finals session.

Although the men’s performances have been uninspiring, except of course a little excitement from Mr. Morozov, it has been thrilling to watch the racing. The 400 IM and 100 breaststroke were great examples of that, the events were so exciting that I almost forgot how slow the final times were.

Sarah Sjoestroem is continuing to ride the wave of success that began this summer in Barcelona where she won the 100 butterfly at the World Championships, four years after the first time she stood on the top of the podium in the event.

With strong performances in both the 50 butterfly and 100 freestyle tonight it will be exciting to see what type of time she can put in her primary event and the one that made her so famous all those years ago.

The comment on Efimova’s swim regarding the splits being so close, is affected by an incorrect calculation of the splits. Her final 50 is 35.06 not 34.06 if the 139 150 split is correct. Amazing swim but she didn’t hold the 50s as close as noted.

I managed to saw Hosszu twice, first in the 100IM semi-finals and, secondly, as a member of Hungarian mixed relay.

I thought Friis would have been more competitive. Is that even her best time? She was so fast this summer and today she died big time the second half. She wanted to really focus on this meet and that is why she came to the US but didn’t work out so well…..yet.