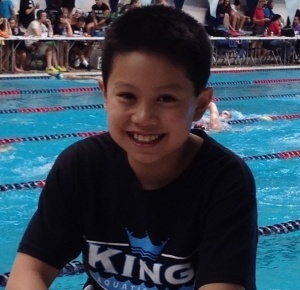 King Aquatic Club’s Ethan Dang broke the 10 & under short course 100 breaststroke mark this past weekend at the annual KING Valentine’s Meet in Federal Way, Washington with a 1:07.25 in the 100 yard breaststroke. That broke Michael Andrew’s 2010 swim of 1:08.53 – crushed it in fact – by over a second. He also holds the long course record for the age group.

Dang isn’t quite as big as Andrew was at that age, but has impeccable technique. This swim, in fact, was 2.5 seconds better than Dang’s own previous best of 1:09.72.

He turned in 32.30, which also blew away the old Pacific Northwest Swimming LSC Record that already belonged to him at 32.99. In other swims in this meet, he also swam a 1:02.35 in the 100 IM. That’s nearly a second away from Andrew’s national record in that event, but it did a number on another LSC Record: Coming into this season, former Arizona standout Kevin Munsch had held that mark from 2001 at 1:06.58. That is how you break a record.

All swims from the meet for Dang:

Dang’s breaststroke was three seconds faster than his butterfly – though don’t misconstrue that with his butterfly being weak in any way. In fact, he is the top-ranked 10 & under this season in the LSC in that 100 fly as well (though this wasn’t his best time); his 100 breaststroke would be the LSC’s fastest 100 butterfly or backstroke this season in the age group. That’s how good that swim was. Unofficially, awaiting updated lists from after this weekend, Dang leads the PNS in 9 of the 12 individual events this season.

Special thanks to Ethan’s parents for posting the video and KING coach Doug Djang for sending it our way.

WHOA! That kid is smoking fast. I had the pleasure to see him swim and gave him some tips in the warm down pool at the 2012 Western Zones. This kid is a star!