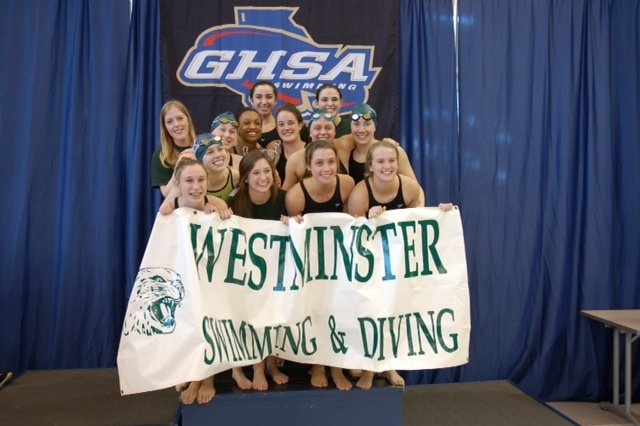 Disclaimer – Ceci Christy, who we work with here at SwimSwam is the mother of Katie and Jamie Christy of Westminster High...

Disclaimer – Ceci Christy, who we work with here at SwimSwam is the mother of Katie and Jamie Christy of Westminster High School. But don’t let that mislead you: they are really as awesome as described.

The Georgia “small schools” girls’ State Championship meet was held last weekend at the Georgia Tech Aquatics Center, and the swimmers from Westminster High School were big-as-could-be en route to the A-5A State Championship Meet. There was plenty of back-and-forth in the team scoring at this meet, but one thing remained constant: the Westminster girls led the meet wire-to-wire for their second-straight state title.

They began with a 1:43.96 in the 200 medley relay that set a new State Record. USC-bound senior Jamie Christy and her sophomore sister Katie Christy got the relay off to a big lead in splits of 26.84 and 29.13, respectively, but it was another senior Nicole Stafford who really shut the door on the butterfly leg. She split 23.98, making her the only swimmer to even go under 26 seconds. She’s going to Stanford next year, and could be a big player right off the bat for them. With little left but shouting, Erika Redding anchored home in 24.01. All but the backstroker Katie Christy graduate next season, leaving her as the new focal point of what could be a rebuilding year.

(Record notes: The swim took down a 2011 Lassiter High School relay that was a 1:45.01 by over a second (among the big names on that old relay are A&M’s Sammie Bosma and Georgia’s Shannon O’Malley, along with another D-I swimmer Kimberly Carducci from UNC and Jordan Drake, who will be a freshman at UConn next year.)

That same group of swimmers came up huge all-day long, despite the team not being large in numbers. Stafford swam a 1:45.29 in the 200 free for another win and another new State Record. The old mark of 1:46.32 was held by Elizabeth Hill, another Westminster alum, in 2004. North Paulding’s Stephanie Peters held off a tightly-packed group of three swimmers to take 2nd in 1:50.21.

Later in the meet, in the 500 free, Peters won by very nearly 10 seconds with a 4:49.49, followed by Marist’s Sarah Smith in 4:59.03. The two juniors will be back in this race again, though with neither dropping much time yet as a junior, one would expect the outcome to be similar. There are a group of young freshmen and sophomores, including Lila Best (4:59.38 for 3rd, 5-second personal best) who will be looking to make up ground on both of them.

The younger Christy sister, Katie, got in on the individual scoring first, with a 2:04.40 for the win (nowhere near Kathleen Hersey’s State Record alas: a record that had been a National mark at one point). A fun quirk of history in this race, the top 6 swimmers in this race were all sophomores, which would have been 7 were it not for a DQ. The runner-up was Darby Wayner of the Savannah Arts Academy, who held pace at the halfway mark but was put away by a strong Christy breaststroke.

Breaking the strangelhold by Westminster, Woodward Academy’s Caitlin Cooper won the 50 free in 23.00. Ann Williamson was 2nd in 23.54 and Cooper’s teammate Joelle Borchers took 3rd in 23.99. Woodward would take another bite into Westminster’s lead with a 1-2 finish in the 100 free after the diving break: Cooper winning in 50.15 and another underclassmen, junior Kathleen Cook, taking 2nd in 51.76. Wayner was 3rd this time in 51.78.

It will come as no surprise, as Westminster Academy has three great sprinters, that they won, by nearly three seconds, the 200 free relay in 1:36.10.

In between, though, Stafford picked up her team’s 4th title with a 53.49. That’s a personal best time for her by almost a second, and gives the Cardinal great value next season. In the second-straight year of pretty weak butterfly classes, Stafford probably now sits about third behind Linnea Mack and Olivia Barker in this year’s class. Look out for the class of 2014 nationwide though, as it is stout with flyers.

Among those vying for scholarships next fall are Allatoona junior Aja Malone, who was 2nd here in 54.65. Malone also won the 100 backstroke in 56.26, just barely beating out Calvary Day’s Patricia Forrester (56.27) and McIntosh’s Missy Beall (56.29). In total, the top four finishers in this race were separated by just .22 seconds, with Katie Christy coming in 4th.

Team Christy got their third victory of the day when Jamie won the 100 breaststroke in 1:03.97.

In the meet’s final race, with the team title mathematically locked, Westminster again stacked their relay and went after another State Record. They got it again, swimming a 3:26.22 to break a suited record from 2009 of Brookwood High School (3:26.54). Stafford again was the star of the show with a 49.09 anchor leg, and joined by Maddie Downs and the Christy sisters.

Though the overall team title was no longer in contention in this race, there was still a matter of a runner-up trophy to be settled. Woodward came in two points behind Marist, and on paper after prelims it looked like Marist had a chance, albeit a slim one, at holding them off. Ultimately though, it was that great Woodward sprint group that swam a 3:30.13 (with a 50.47 from Cooper) for 2nd in this race and to finish in a dead tie with Marist for 2nd overall.

With all of the graduations that are hitting Westminster, Woodward should be the favorites headed into next year’s meet.

(Note: Not that club affiliations are the focus of high school meets, but it is interesting to note that out of 8 individual swimming champions in the women’s meet, 6 of them swim for Atlanta’s Dynamo Swim Club.)

Seating capacity is about 2000 at the GTAC and the place was pretty much at capacity.

Just wondered if it was more than the headline of 1000 go to watch missy franklin swim….so twice as many?! just curious..thanks Chris

Lest we fail to mention in the 6A division, 5 of the 8 State Champions in individual events swim for Swim Atlanta.

There are 8 individual events and 16 individual champions (8 girls and 8 boys.)

Great job to all that competed!

Great chart coach. Would love to see a breakdown like this for all states. Hmmm…