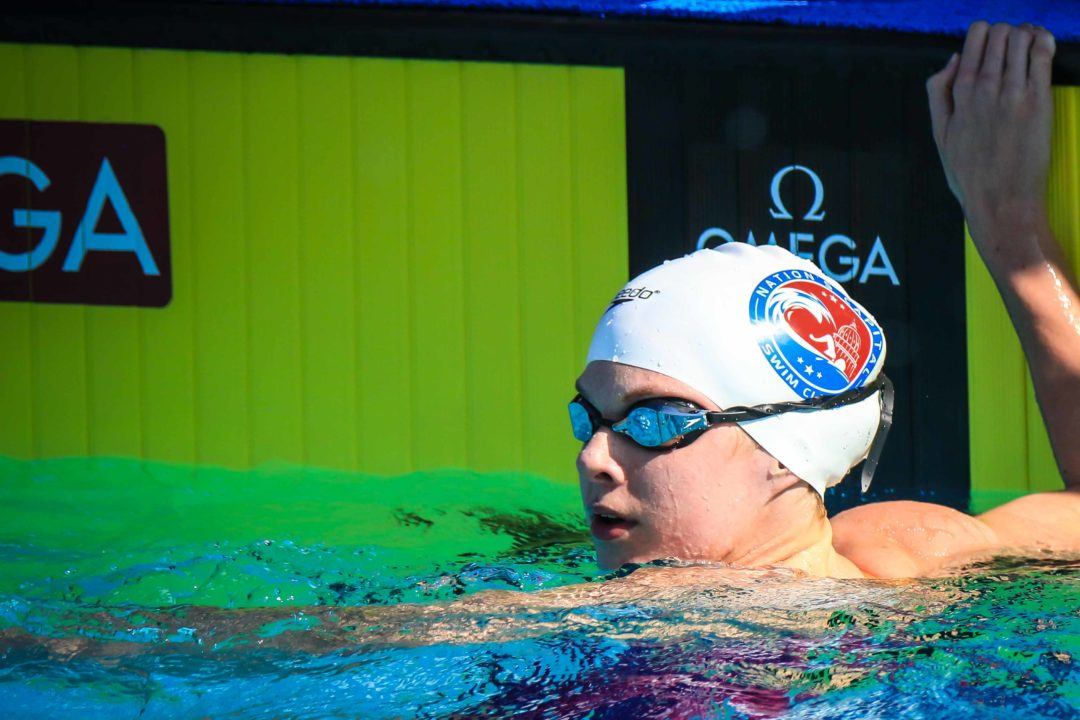 The Richmond Futures Championships are set to kick-off beginning on Thursday at the Collegiate School Aquatic Center. The meet, which features some of the country’s top age-group athletes, is significantly larger than in traditional years due to the limited number of sites being offered.

Bluefish Swim Club and Nation’s Capital Swim Club currently dominate the psych sheets for the Richmond site, bringing in many of the top-ranked swimmers across the event schedule.

Nation’s Capital will be led by 16-year-old Olympic Trials finalist Erin Gemmell, who is seeded first overall in the women’s 200 freestyle and 400 freestyle. Gemmell also holds top-5 seeds in the 400 IM and the 200 IM, where she is seeded 4th and 2nd, respectively.

Gemmell will be joined by teammate and wave I Olympic Trials standout Camille Spink, who sits atop the psych sheets in the 100 freestyle with her personal best of 55.25. Spink won the 100 freestyle at Wave I, and nearly made it back to semi-finals at the Wave II meet, placing 22nd overall. Notably, Spink will not be swimming the 50 freestyle, where she placed 16th overall in Omaha. Spink also holds a top-3 seed in the 200 freestyle behind Gemmell and Claire Weinstein.

NCAP will also be represented in the distance freestyle events by Paige McKenna, a member of the National Junior Team. The Wisconsin recruit is slated to swim both the 800 and 400 freestyle events, where she is seeded 1st and 3rd, respectively.

On the men’s side, NCAP is led by 17-year-old Landon Gentry, who is the top seed in the 200 butterfly. Gentry contested the event at Olympic Trials, where he finished 26th overall. Gentry is also seeded 2nd in the 200 IM and holds the 46th seed in the 100 freestyle. Given his recent performances, Gentry should be able to significantly move up in the 100, placing himself as a potential podium threat.

Bluefish brings in a group of top seeds as well, including US National Junior Teamer Summer Smith, who holds the #1 seed in 5 different events. Smith, who was a semifinalist in the 200 backstroke at Olympic Trials, currently sits atop the standings in the 200 butterfly, 400 IM, 100 backstroke, 200 backstroke, and 200 IM. In addition, Smith holds the third seed in the women’s 800 freestyle.

On the men’s side, Bluefish brings in Joshua Parent and Caleb Maldari, who were both recently named to the US National Junior Team’s International Roster due to their performances at Olympic Trials. Parent is the top seed in three different events: the men’s 400 IM, 400 freestyle, and 1500 freestyle, plus he holds the third seed in the 800 freestyle. Maldari sits atop the psych sheets in both the 100 and 200 backstroke events, holding the top seed in the 200 by over 2 seconds.

Several other teams will also be well-represented in Richmond. The aforementioned Weinstein, at only 14-years-old, is currently seeded in the top-5 in 6 different events, and holds the top seed in the 1500 freestyle. The Westchester Aquatics Club swimmers could potentially win multiple events at the meet given her recent performances. The Jersey Flyers bring in 16-year-old Roman Jones, who is seeded first in the 100 butterfly by three tenths of a second. Jones also holds a top-5 seed in the men’s 100 freestyle and is seeded 6th in the 100 backstroke.

Surprised you failed to mention fast rising sprint star Ian Arnold. After a great year of training at Miami he decided to forego his conference championship meet to focus on Futures this summer. That shows how much he cares about this meet. With his first shave and taper in almost two years, he will surely be a force to be reckoned with!

Hi Ian Arnold Superfan!
I couldn’t agree with you more. After a tough year during a pandemic I have heard great things about this elite D1 swimmer. He has great potential to pull off incredibly fast swims this weekend. Teammates of him look up to him as a leader as he never gives up during practices and pushes new boundaries in the weight room! Can’t wait to see the results

Really glad this college swimmer is at a meet designed for 18 & Under.

Where did you see that the meet was designated for 18 & unders?

It’s literally called Futures. And, this meet was created to bridge the gap between Sectionals and Summer/Winter Junior Nationals.

I simp for Chuck Batchelor