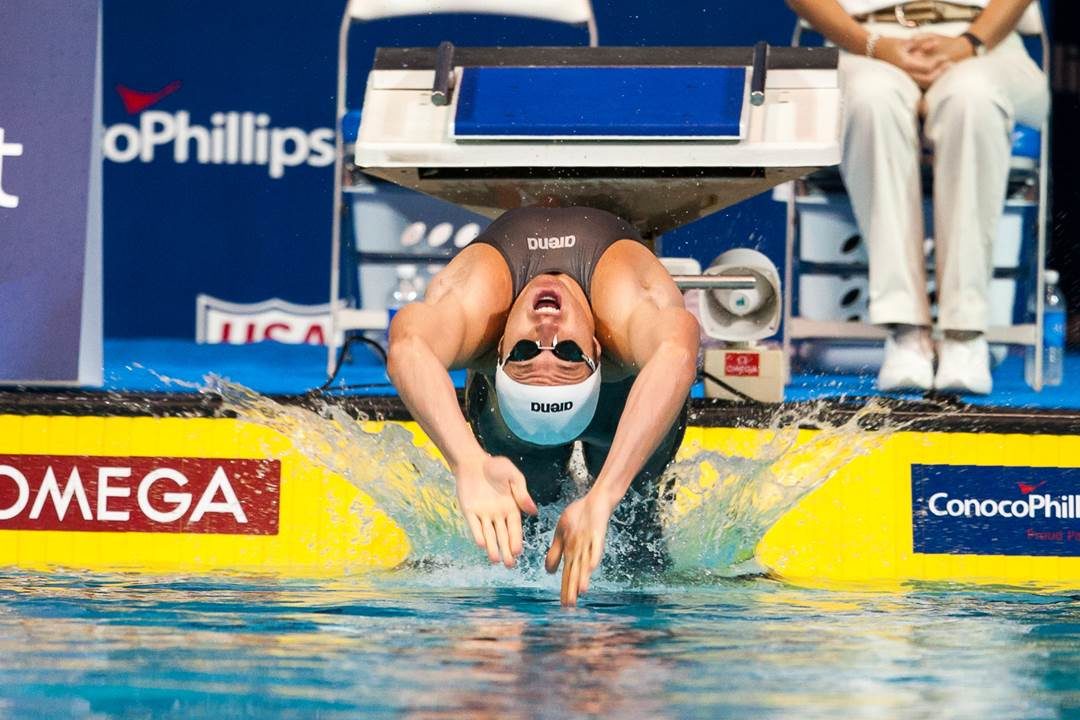 Aaron Peirsol first broke the LCM world record in the 200 backstroke all the way back in 2002. He is still the world record holder in the event to this day. Archive photo via Tim Binning/TheSwimPictures.com

The American men have dominated the backstroke events at the international level over the last two decades. World record holder Aaron Peirsol was a major contributor to this success.

Peirsol became the first man to break 52 seconds in the 100 LCM backstroke when he won the event at the 2009 World Championships in a time of 51.94.

He first broke the world record in the 200 back in 2002. He then continued to reset it over the next few years.

At the 2005 World Championships in Montreal, Peirsol entered the 200 back final as the top seed and defending Olympic champion. His world record at the time stood at 1:54.74.

He went out under world record pace in the first 50, splitting 27.01. He continued this pace through the first 100, while fellow American Ryan Lochte moved into second place.

Peirsol picked up his stroke rate in the third 50, extending his lead over the final 100. The world record line crept up to him, but he managed to hold on, clocking a new world record of 1:54.66.

Peirsol would re-break his 200 back world record at the 2006 Pan Pacific Championships in 1:54.44. However, at the 2007 World Championships, Lochte beat Peirsol and broke his world record, handing Peirsol his first loss in 7 years.

At the 2008 Summer Olympics in Beijing, Peirsol won the 100 backstroke in a new world record of 52.54. But he was again defeated by Lochte in the 200 back. He would reclaim his world record the following year at the 2009 World Championships in Rome, setting the current mark.

Peirsol retired from competitive swimming in 2011.

I think his 100 Back record was from the US Trials. I think he cruised prelims too much and didn’t make the finals in Rome.