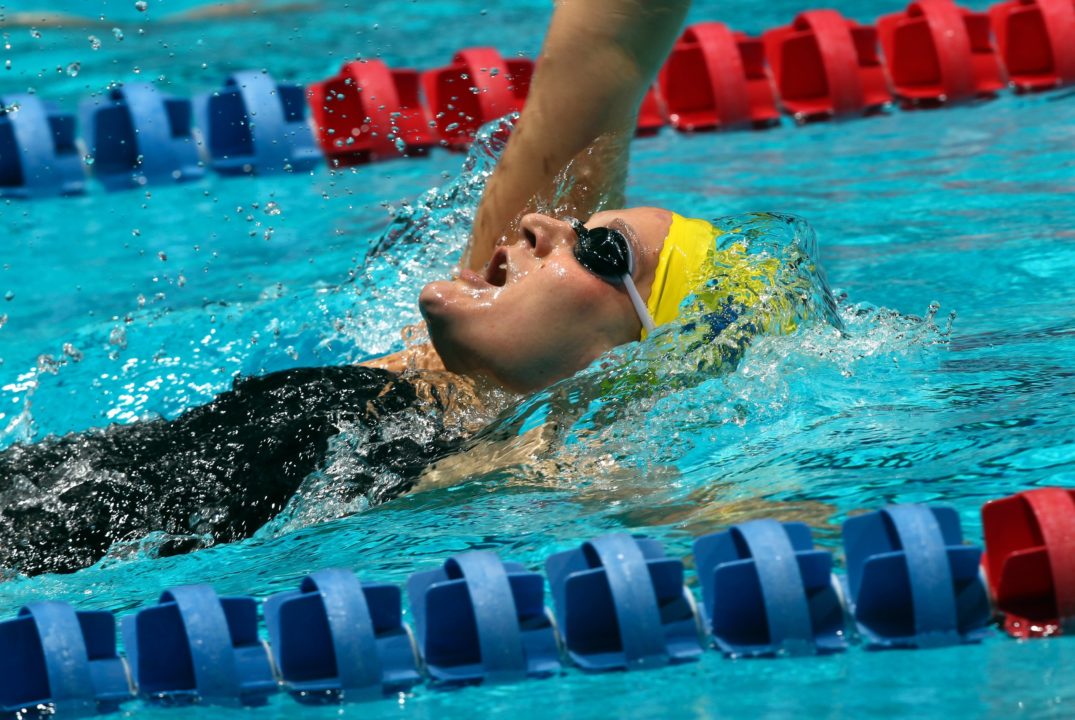 The Emory University Swimming and Diving team turned in some of its strongest dual meet performances of campaign, but both the Emory men and women were ultimately defeated by NCAA Division I Georgia Tech on 'Senior Day' at the Woodruff Physical Education Center on Saturday afternoon. Current photo via Emory Athletics

The Emory University Swimming and Diving team turned in some of its strongest dual meet performances of campaign, but both the Emory men and women were ultimately defeated by NCAA Division I Georgia Tech on ‘Senior Day’ at the Woodruff Physical Education Center on Saturday afternoon.

The top-ranked Emory women outscored Georgia Tech in the swimming events, including seven event victories, but were edged in the final score by the Yellow Jackets 159-140.  The third-ranked men claimed victories in four events over their Division I opponent, dropping the meet by a final score of 193-95.

Sophomore Ellie Thompson was the leader for the Emory women, claiming wins in both the backstroke events with times of 57.04 seconds in the 100-yard backstroke and 2:04.24 in the 200-yard backstroke, each good for an NCAA ‘B’ cut.  Thompson also teamed with freshman Annelise Kowalsky, junior Nina Zook and junior Nancy Larson to win the 400-yard medley relay with a ‘B’ cut time of 3:52.71.

The Emory women completed their sweep of the relay events with a win in the 400-yard freestyle relay, as freshman Claire Liu, freshman Marissa Bergh, juniorMcKenna Newsum-Schoenberg and Larson won the event with a ‘B’ cut time of 3:29.78.  Newsum-Schoenberg added second-place finishes in both the 200-yard butterfly and 1000-yard freestyle, swimming a provisional time of 2:06.48 in the former, and a mark of 10:18.89 in the latter, the best mark this season by an Eagle.

Emory’s men opened the meet with a win in the 400-yard medley relay, as senior Ross Spock, sophomore Andrew Wilson, junior Hayden Baker and senior Jake Stephens won the event with a ‘B’ cut time of 3:22.56.  Wilson added on two additional NCAA provisional qualifying times during the meet, winning the 100-yard breaststroke with a time of 56.74 seconds and finishing second in the 200-yard breaststroke with a mark of 2:06.22.

Emory’s other ‘B’ cut swim during the meet came from Spock, who won the 100-yard backstroke with a time of 50.40 seconds.  Stephens added an individual victory in the 200-yard individual medley with a time of 1:54.61, while freshman Mitchell Cooper finished second in the 1,000-yard freestyle with a time of 9:41.41, the best mark this season in the event by an Eagle.

During the last four years, Emory’s seniors have helped to uphold the high standards of the Swimming and Diving program, leading the women’s squad to three NCAA Division III National Championships and three University Athletic Association (UAA) titles, while the men have also claimed three conference titles and registered a pair of top-three National finishes to date.

The Eagles will be back in action against another top-flight Division I program next Saturday, January 25th, when the team travels to Tuscaloosa, Alabama to face the University of Alabama Crimson Tide.

The above is a press release posted on the Emory Athletics Website. For complete meet results, click here. Also, just as a note, it’s pretty ballsy to have your senior meet against a fairly equally matched team rather than one you can easily destroy, so props to the Eagles for working hard, swimming fast and celebrating their seniors!