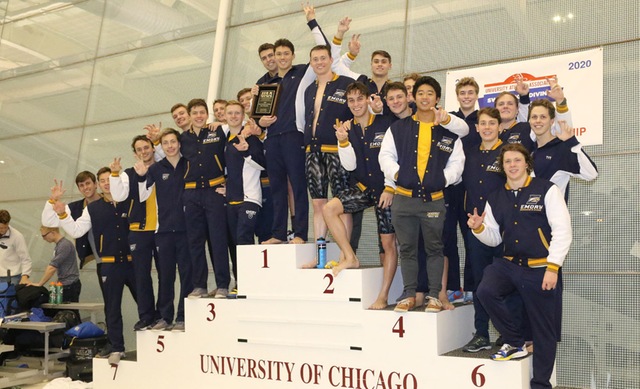 The Emory men won the meet-ending 400 free relay to solidify a 22nd straight title, with the women matching that feat. Current photo via UAA Sports

The Eagles tacked on three additional event championships Saturday evening to help clinch the conference crown. In total, Emory won 11 of the swimming titles and posted 23 All-UAA finishes as the team finished 154 points ahead of second place New York University.

Freshman Savannah Sowards was recognized at the conclusion of the meet as she named Co-Rookie of the Year. Sowards was an All-UAA performer in the 400 Medley Relay (2nd), 100 Butterfly (3rd) and advanced to the championship final in both the 100 Backstroke (6th) and 200 Backstroke (7th).

The 33rd annual University Athletic Association Men’s Swimming & Diving Championships came down to the final event Saturday night in Chicago, IL and for the 22nd consecutive year it was the Eagles of Emory University that came away as the best in the UAA.

Leading by just 8.5 points heading into the championship final of the 400 Freestyle Relay, the Eagles needed a big-time swim by the team of senior Sage Ono, sophomore Colin LaFave, junior Chris Nicholson and sophomore Pat Pema and the group came through, headlined by Pema’s anchor leg. The sophomore closed out a tremendous championship meet with an anchor split of 44.81 that helped the Eagles overtake Chicago during the final leg and seal the team title. The quartet came in at 3:00.00 flat with the Maroons taking silver at 3:00.83.

The final 16.5-point margin of victory was the second closest in the history of the UAA Championships on the men’s side and the closest since a 3.5-point victory for the Eagles over Chicago in 2014. During the 2020 Championships, Emory secured seven event titles, 14 All-UAA finishes, established one UAA record and two school records.

Sophomore Lucas Bumgarner was honored at the conclusion of the meet as he was named the Men’s Diver of the Year for the second time. Bumgarner had another strong showing on Saturday in the 1-meter, earning the event championship with a finals score 575.10. Earlier in the afternoon, Bumgarner set a new school record with the top prelims mark at 581.80. Diving Coach Michael Haun also received recognition, being tabbed as the men’s Co-Diving Coaching Staff of the Year.

In addition to Bumgarner and the 400 Freestyle Relay event titles on Saturday, the Eagles recorded All-UAA performances in the 100 Freestyle with Nicholson placing third with a finals time of 45.47 and in the 200 Breaststroke, sophomore Jason Hamilton claimed bronze with a time of 2:01.84.