Emory Kicks it Into Gear in Intrasquad Meet 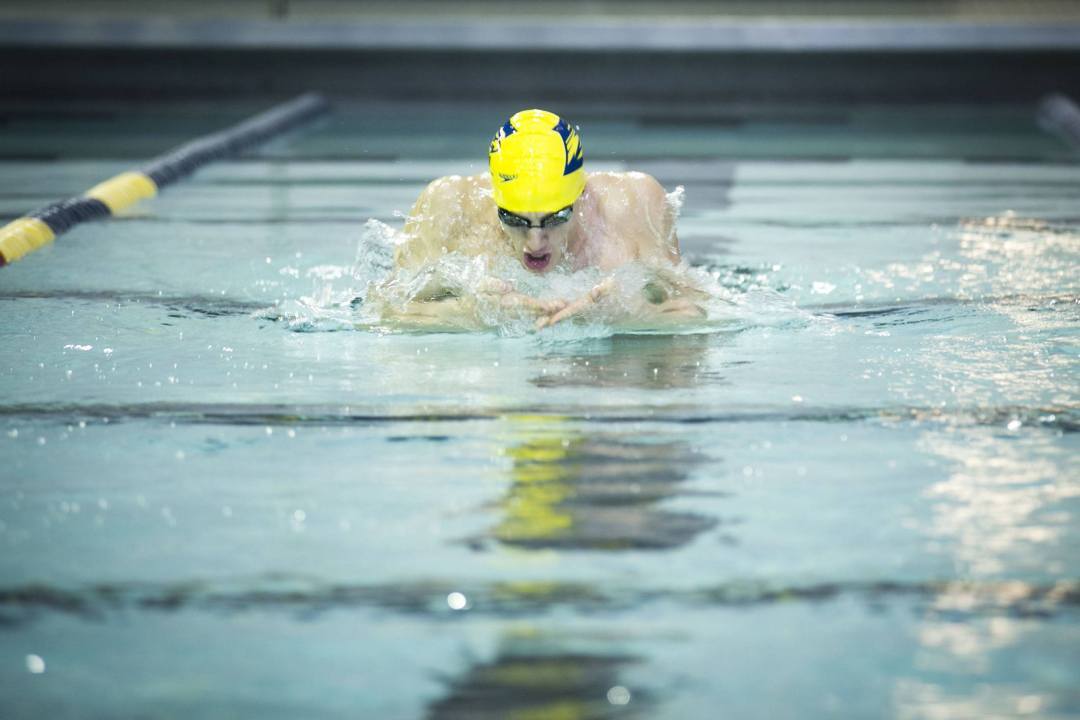 Andrew Wilson cruises through breaststroke to win both the 100 and 200 in would-be B cut times during Emory's intersquad meet. Current photo via Emory Athletics

The Emory Eagles have a rep for speed, and that’s one they’ve already come to own, before many teams have even touched the water for competition this year. The Eagles enjoyed an in-house competition on Saturday, which means that none of the times posted will actually count towards qualifying for the 2015 NCAA meet, but that didn’t stop them from rolling to several B cut times!

The Eagles’ teams spit into Blue and Gold for their interhouse racing. The women’s Gold team came out victorious, 158.5 to 134.5 while the men’s Blue and Gold actually tied, both finishing at 130.

As always, the Eagles will be the ones to watch, right out of the gate this year, and if this opening meet is any indication, DIII may be in for a big surprise come National time.

On the men’s side of things, the Eagles fell just a little short of as many B times. Junior Andrew Wilson posted quick times in both his 100 breaststroke (56.35) and 200 breaststroke (2:03.85). In both events, Wilson finished pretty darn far ahead of his competition, probably in part due to the training he did over the summer. Wilson qualified for and competed in the Phillips 66 Summer Nationals, taking top 30th finishes in all three of his breaststroke events (50, 100 and 200), placing highest in the 50 at 14th. All that summer training and racing will stand him in good stead for this season, and he may very well be the man to beat in DIII breaststroke this year.

For a little perspective… Hayden finished 9th in the 100 butterfly last year at 49.00. With a little less than a second drop (not a huge deal after a season of hard work, a bit of rest and a suit) he could easily stand to drop the two seconds and change it would take to put him right on what won the NCAA championship last year.

Full meet results for Blue and Gold can be found here.

Next Saturday, Emory will embark on another season of intercollegiate competition, hosting the University of North Carolina-Wilmington for the Emory Swimming and Diving Family Weekend. The meet is scheduled to start at noon.

Great start to the season. Some very fast swims out of the gate! NCAA’s here we come. Wonderful coaching, fast swimmers, great team. So glad to be part of an awesome family!!!