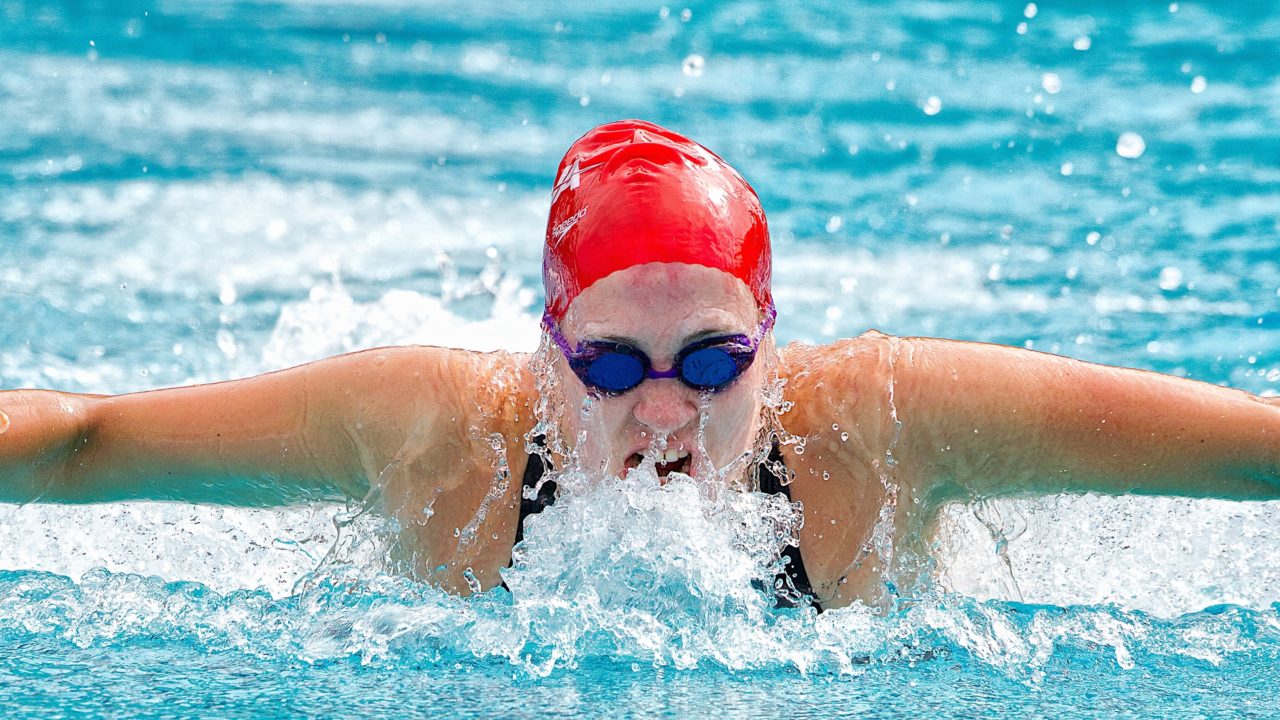 If you don’t like the career you’re in, you might want to work in the swimming community and be a part of our swimming family! Go here to see 2914 Swim Jobs.

We didn’t see any of the record-breaking heroics from the night before on Wednesday at the NCSA Junior Nationals, but there was still a lot of crazy fast swimming.

The meters racing kicked off with the girls’ 100 free, where Cal commit Rachel Bootsma took the win in 56.02. Her 100 free time still hasn’t matured to the level of her 100 backstroke, though one would imagine that will come with age.

Behind her was an impressive 56.63 from 15-year old Carolime McTaggert. That’s the 2nd-best time by a 15-year old this season. Kathleen Ledecky, fresh off of her 1000 and 1650 (yard) freestyle records from Tuesday, showed great versatility to take 3rd here in 56.71. That’s a lifetime best for her, and a big (relative) improvement from her 50.51 yards swim in prelims.

The top two spots in the boys’ 100 free was swept by New Trier teammates Jonathan Grodecki (50.92) and Reed Malone (51.06). That’s not really a surprise, as the high school wing of the program (including these two) became the first high school relay under 3 minutes in the 400 yard free relay a few weeks ago in Illinois.

Brent Murray of SwimAtlanta, a former Junior National Champion who was a huge recruit for Utah before returning home, was 3rd in 51.13. Other notable swimmers in this final include Andrew Jovanovic in 6th in 52.15. He had a better yards prelims swim in 44.89.

In the girls’ 100 breaststroke, Sarah Haase followed an outstanding prelims swim, where she broke a minute for the first time in her career, with another lifetime best of 1:09.42 in the finals. That’s the 8th-best time by an American this year, which is significant as it puts her in a position to final at the Olympic Trials this summer.

Emily Cameron (1:10.90) out of Rockville-Montgomery and Anne Lazor (1:11.11) from Birmingham (Michigan, not Alabama) took 2nd and 3rd. Lazor is one of the big pieces of a very good Ohio State recruiting class. Another Emily, Emily Kopas, actually had the 2nd-fastest time with a 1:10.88 in the B-Final.

In the women’s 200 fly, Bootsma was the top seed in prelims, but she was clipped by NOVA’s Emma Nunn in 2:12.02 in finals. This continues a great NOVA tradition in the event, as Rachel Naurath won in 2010, Nunn won in 2009, and Liz Shaw won in 2006. Last year, NOVA didn’t win the event, but they did put two in the top three. Nunn will be bucking the tradition, however, and heading south to North Carolina in the fall (both Naurath and Shaw went to rival Virginia).

Bootsma took 2nd in 2:14.67. She was out well in a 1:03, but slowed on the back-half. She usually swims the 200 back on the first day of this meet, but the shift to the 200 fly shows what she might be looking at when she gets to Cal next year, where they are loaded with backstrokers.

That 200 back in her absence went to Jillian Vitarius out of Blue Tide Aquatics in Houston. The Auburn commit went a 2:12.69. Future teammate Caitlyn Forman took 4th in 2:15.48.

In the men’s 200 back, Jack Conger took the win in 1:58.54. That’s a lifetime best for him by over a second-and-a-half, and is a much more impressive mark than his yards coast to the top seed in prelims. The last two 17-year olds who were faster than that were Michael Phelps and Aaron Peirsol.

Other Winners on the day:

Andrew Seliskar from Curl-Burke won the 200 fly in 2:01.80. Malone earned his second silver of the day with a second place finish in 2:01.86 – he almost chased Selsikar down at the end of the race, but was a stroke away from the win.

Jason Coombs out of the Blue Dolfins (not a typo) swim club in Florida won the boys’ 100 breast in 1:05.19. Andrew Schuehler of the Jersey Wahoos was the fastest time of the final, swimming out of the B-Final in 1:04.16 – a half-second career-best. First Colony’s Kyle Yu also went a 1:05.13 in that B-Final.

Im not sure rachel bootsma does the 200 back usually, if ever. It makes it interesting for next year however because one would think she would choose the 200 back, but she almost never swims it. The 200 fly is what i think theyll put her in since itll be a definate weak spot. Although if catherine breed swapped the mile for the 200 fly which i think would be a great move, then that could be a potential strength for the bears.

I don’t understand why Rachel Bootsma almost never swims the 200 back. I can understand she doesn’t like it. I’m not a specialist, just a swimming fan, but I think it would be interesting for her to work endurance. It would help her for the 100 back, her main event. She already has the speed, the underwaters, the turns. She must work the second part of the race if she wants to be in the top 2 at next trials. It’s the opposite side of Missy Franklin who has a fantastic finish but must work the speed, the underwaters and the turns. Great swim for Jack Conger. And great swims for Andrew Seliskar too. This guy, only 15, is good… Read more »

It’s exciting whenever there is a swimmer who is so good we don’t know what they will swim at NCAA’s. Bootsma has already put herself in a great position to A-final in the 200 fly. Her time places something like 11th this year and there are 6 seniors graduating ahead of her. I would bet she chose these events to point her in a direction for next year since this is probably her last yards meet until college. She also might be really beneficial in the 100 free. They are losing practically their entire sprint group (Jensen, Isakovic, Raatz, Fotsch) and with Bootsma already at 48.8 she could probably final next year and help all the 200 and 400 relays.… Read more »