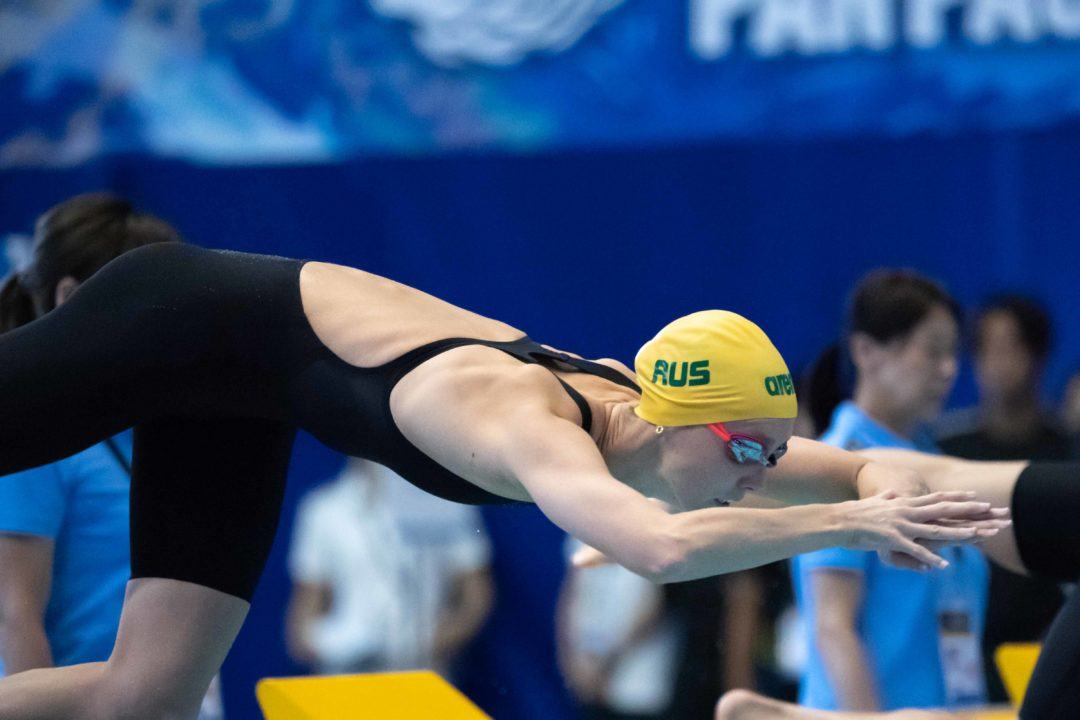 Emma McKeon went sub-51 in the 100 SCM freestyle for the first time at the FINA World Cup, making her among the top-five best performers in that race. Archive photo via Mike Lewis/Ola Vista Photography

For the first time ever, Australian swimmer Emma McKeon swam sub-51 seconds in the 100 SCM freestyle. Her personal best time of 50.96 earned her the gold in the FINA World Cup series.

McKeon most recently swam the 100 SCM freestyle in Match 8 of the International Swimming League season, swimming a time of 51.05. McKeon’s World Cup performance is the fastest time for the event this season, beating her own performance from the ISL regular season. Her previous best time is from Match 9 of the 2019 ISL season, when she swam a time of 51.02.

McKeon is now in the top eight of all-time 100 SCM freestyle performances and the fifth-fastest performer ever. The top honor is held by Cate Campbell, who swam the event at the 2017 Hancock Prospecting Short Course Championships in a time of 50.25. That same year, Sarah Sjostrom swam the second-fastest time of 50.58 at the World Cup in Eindhoven.

At the World Cup, McKeon was a full second ahead of the second-place finisher, fellow Australian Madison Wilson, who was hospitalized in late September with COVID-19. Both Wilson and McKeon participate in the International Swimming League, which began after the Olympic Games and just finished up its regular season.

McKeon is coming off of a historic showing at the Tokyo Olympics. She took home seven medals, the most by any female swimmer at a single Games, including gold in both the 50 and 100 free.

It’s crazy that there are two active swimmers from one country on this list. No American could do this even with a running start.

Beast mode. I think Campbell’s 50.2 is safe for now though. That’s another level.

I doubt Emma is peaked for World Cup. She could probably beat that at her best.

IF she specifically set herself, its not out of the question. Over this World Cup/ISL period; unlikely although she could drop her PB further, maybe down towards Sjostrom’s time.

10
0
Reply
Just give the trophy to the condors already

It’s crazy she can be so far ahead of everyone, and is not even known for her turns.

Yes, it like her winning the medley relay for Australia with her fast START! She is not known for that either.

Her relay start is pretty good. It’s a bit easier to figure out a decent rolling start than it is a flat start, and you can be terrible at the latter yet great at the former. I’m not a coach, but I’d be of the convention that you’re almost “born” being a good flat starter, while “anyone” can get good at a relay takeoff. C1, Phelps, Peaty, and PVDH are good examples of this (I thought of Chalmers too, but I’d say his flat start was at least average relative to the pack in Tokyo).

This is the same as the mystery that is Townley Haas.

Lochte didn’t swim the 200 SCM free much when he got great at the 200 LCM free. Pretty sure when he was rocking the 1:44’s LCM he would’ve torched Townley’s best time at a WCs.

I think some of this is because of how much SC swimming has progressed in the past decade, which wasn’t that thrown off due to the suit era. People are finding new ways to swim/train SC–nearly every event, especially the 200s, are being swum like a pure sprint. Convention would tell you there is no way Seto could go 1.4s faster in the 200 IM than Lochte, despite Lochte being 1.5s faster in LC and having underwaters in 2011 that made Phelps’s look average. But, if you look at the way Seto swims the 200 SC, it makes sense.