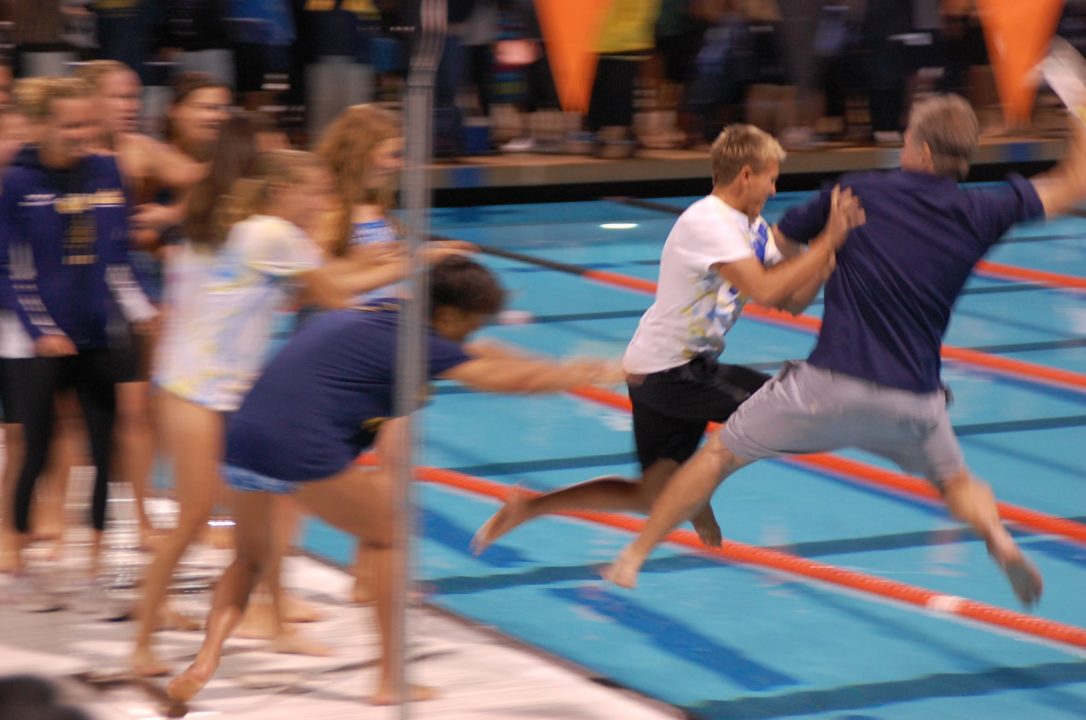 Big thanks to Anne Lepesant for leading our coverage from this week’s California Southern Section High School Swimming & Diving Championships.

The 2013 CIF Southern Section High school swimming and diving championships got off to a fast start in Southern California tonight. The four divisions of CIF’s southern section are meeting at Riverside Aquatic Center over the next couple of days to crown their respective winners.

The girls of Crean Lutheran lit up the pool on the first night of the CIF Southern Section Championship finals. (Photo: Anne Lepesant)

The Woodcrest girls were second and La Salle finished third.In the 200 free La Serna junior Alyssa Shew got out early and stayed in front, winning in 1:53.07. Junior Rosalee Santa Ana of Calvary Chapel and Jennifer Langen, a junior from Flintridge Prep, finished second and third, respectively.

Crean Lutheran’s second record of the night came in the 200 IM. Sophomore Ella Eastin took off like a shot and had nearly half a pool length lead after the first two legs (at 53.65). She finished in an astounding 1:55.15, four seconds faster than the record she had set last year, and almost two seconds faster than her personal best (from junior nationals in December 2012). She was followed by Lindsey Clary (senior, Poly Riverside) and Jacqueline Torrez (freshman, La Salle). In addition to breaking the meet record, Eastin lowered her own Southern California Swimming 15-16 record, and logged the 9th fastest 200 IM in the U.S. this year – and that includes NCAAs. She also broke the National Independent High School Record set at the Colorado State meet this year by one Missy Franklin at 1:56.85, and then rebroken by Delaware’s Kaitlyn Jones shortly thereafter. They are both seniors.

Did I mention that Eastin is only a sophomore?

Just when you thought it couldn’t get any more exciting, it was time for the 50 free. Crean Lutheran’s sensational junior sprinter, Lindsey Engel, had broken Dara Torres’ 1985 record of 22.69 in prelims with a 22.56. She did it again in finals, shaving another .03 off to win the event in 22.53. Senior Kellie Thorsness (Costa Mesa) and junior Audrey Gosnell (Oaks Christian) rounded off the podium.

The 500 free was the second match-up of the night between Ella Eastin and Lindsey Clary. Although Clary was the top seed after prelims, the Crean Lutheran sophomore prevailed with yet another record-breaking swim. Eastin won in 4:44.47 (breaking Lynette Lim’s 2010 record of 4:45.29); Clary was second, and Rosalee Santa Ana of Calvary Chapel took the bronze.

The 100 back podium (which featured the same swimmers as the 100 fly) was topped by Crean Lutheran freshman Emily Eastin, who won easily in 54.18. She was followed by Laguna Beach’s Lila Vera and La Salle’s Samantha Torrez.

La Serna’s Alyssa Shew was the 100 breast winner, finishing in 1:04.64, nearly four seconds ahead of Jacqueline Torrez of La Salle and Robin Smallwood of Granite Hills.

The final event of the night, 400 free relay, was never much of a contest. Crean Lutheran led from wire to wire, finishing in 3:30.07 (Lindsey Engel 49.03, Lizzie Saylor 1:00.27, Emily Easton 51.31, Ella Eastin 49.46). Laguna Beach was second; La Reina, third. Crean Lutheran’s victory ends a run of three-straight girls’ titles (and two straight boys’ titles) moved up to Division 2 this year, and will swim their championship meet on Saturday morning.

The boys’ meet was every bit as exciting, albeit without all the records.

Laguna Beach freshman Erik Juliusson pulled off a nice 200 free, coming from third at the 100 to win a tight race in 1:40.68. Arlington senior James Reyes and Poly Riverside junior Garret Shimko were second and third, respectively.

John Brody, a senior from Viewpoint, won the sprints tonight. He was 21.74 in the 50 free, followed by Jack Richey-Luna (senior, Adolfo Camarillo) and Mitchel Embrey (senior, La Serna). He later won the 100 free in 47.32. Buckley junior Austin Wilson and Poly Riverside junior Garret Shimko were second and third.

Kyle Perez of JW North won his second event of the night going 4:33.17 in the 500 free. James Reyes (senior from Arlington) was second and Thomas Bunker (sophomore from Rio Mesa) was third.

Arguably the most exciting race of the night on the boys’ side was the 200 free relay. Neck-and-neck throughout, it was nonetheless JW North that brought home the gold in 1:28.11 (Noah Schlenk, junior, 22.11; Sedtavut (Justin) Nilaad, sophomore, 21.90; Austin Borja, junior, 22.13; Edgar Zetina, senior, 21.97), 17 hundredths in front of Oaks Christian. Woodcrest finished third.

Laguna Beach freshman Erik Juliusson scored his second victory of the meet with a 52.79 finish in the 100 back. The battle for second was exciting: Crean Lutheran junior Justin Son got his hand on the wall .02 before Adolfo Camarillo sophomore Michael Nunn.

The men from JW North are the 2013 Division 3 Southern Section Champs in California. (Photo: Anne Lepesant)

That 400 free relay is a national HS record waiting to happen.