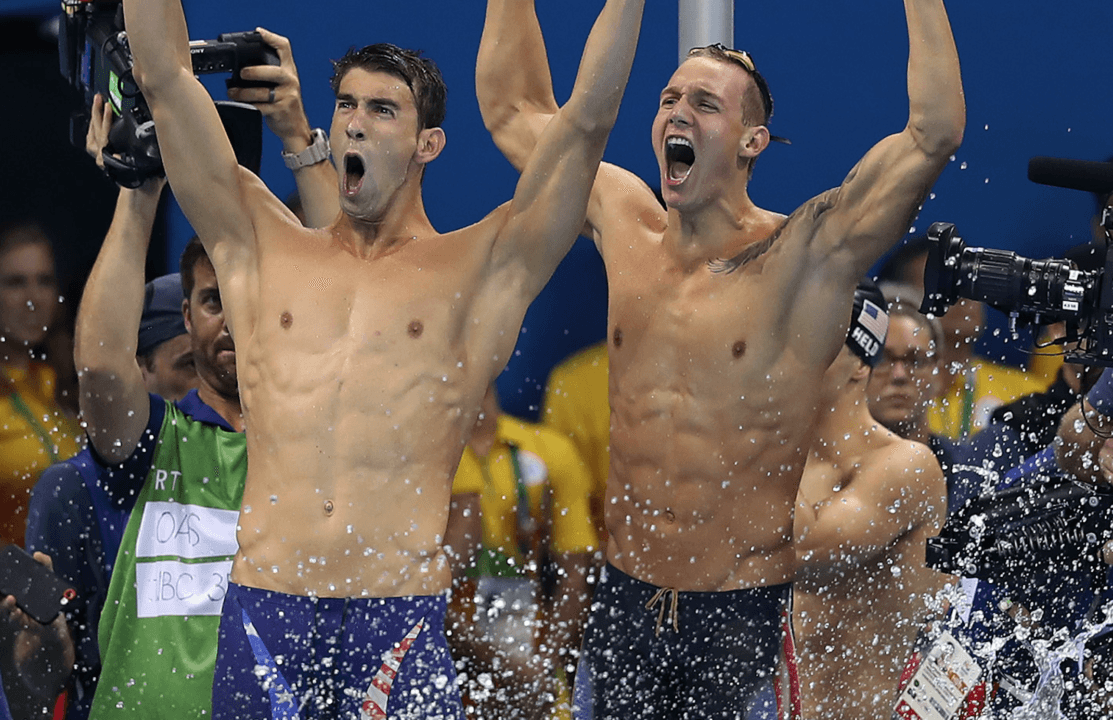 For years its has been known that in running, different distances favor different body types. Sprinters are generally more powerfully... Current photo via Simone Castrovillari

For years its has been known that in running, different distances favor different body types. Sprinters are generally more powerfully built and thus have a higher BMI, while distance runners are generally thinner and smaller and have a lower BMI. This is due to the tradeoff between weight and power in land athletes. Stronger athletes generally weigh more due their larger muscle masses, which in turn, requires more strength to move quickly. Larger muscles also require more oxygen transport.

Whether a similar tradeoff exists in swimming has long been unclear. Drag, not weight, is the primary limitation on the speed of swimmers. According to a new study (paywall) published by Christian M. Gagnon, Michael E. Steiper, and Herman Pontzer of CUNY, swimmers face no such tradeoff between body mass index, or BMI, and endurance. The study, published in Proceeding of the Royal Society B, examined swimmers who completed in the London Olympics in 2012. They showed that swimmers competing there did not have statistically different BMIs across a wide range of events, from the 50m to the 10,000m open water competition. The BMIs of most swimmers completing in London fell within a fairly narrow range – 22-24 for the men and 20-22 for the women. The study also looked at the height and weight of swimmers across various distances and found insignificant differences in each for both genders. Runners, in comparison, get significantly smaller and lighter the longer the distance they compete in.

Only freestyle events were considered here, so whether there may be differences in ideal body types for different stokes was not looked at. Also unknown is whether elite swimmers have these body types naturally or whether intense training causes swimmers to naturally converge to a single body type.

BMI is just a ratio of a person’s weight to the square of their height, so does not take into account other body factors such as body fat percentage. It remains to be seen whether sprinters exhibit any other body types differences compared to endurance swimmers. Another recent study (paywall) in the Scandinavian Journal of Medicine & Science in Sports by Bex et. al. showed that endurance swimmers tend to have a higher concentration of slow twitch muscle fibers as compared to sprinters. Unlike BMI, slow-twitch muscle fiber composition is something which is measurable without special equipment and techniques, proton magnetic resonance spectroscopy in this case.

Based off of the study, it certainly isn’t advisable for coaches to pigeonhole swimmers into certain events or distances based on body type alone. Certainly however, much work remains to be done to find what sort of biomechanical or body-type tradeoffs exists for swimming speed vs. endurance.

Dressel and Michael have the same exact upper body…

Since when is proton magnetic resonance spectroscopy not special equipment?

I think they missed a “not” somewhere in the paragraph

I know proton magnetic resonance spectroscopy isn’t a particle accelerator or zero point energy but I agree that that line was hilarious.

Swimming is managed as a sport very differently from running. You don’t have sprinters typically start out in a distance runner group eventually allowing the runner to move over to sprint work because they have succeeded with the distance training. To the running world, this way of managing the sport would sound kind of crazy. Sprinters in the running world show aptitude for sprinting and do sprint training. Is that because of incremental force in running doesn’t have incremental resistance (air) like swimmings effect of drag (water)? Who knows if you can compare the sports but if you gate keep swimming with distance training, you will have a hard time keeping a higher BMI swimmer. Those rare athletes survive in… Read more »

What’s the average BMI of Coaches? Too high for sure.

And let’s not even get started on officials.

” swimmers face no such tradeoff between body mass index, or BMI, and endurance”
If it is a scientific like article it would be nice if all terms used be clearly defined. What is endurance? Is it a measurable factor? If it is so then what is the way to measure it. Is it the same as measuring tiredness. Or it has nothing to do with the common sense definition and is characterized by concentration of particular substances in the blood: oxygen, lactose or something else.

I think in this case endurance is measured by “length of race competed in.”

Am I the only one who thinks BMI is a useless way to measure a body type?

BMI’s biggest flaw is not differentiating between weight from fat and muscle. Pretty much anyone who is swimming or running at the Olympics has a really low body fat percentage, so that is kind of a non issue for this data set.

I don’t know how many doctors told me, based on my body type, that I was overweight with my 27.0 BMI… this is while I was training. I’m a stocky guy; 6’2″ 210lb while maintaining a body fat percentage of 7%. Yes, I agree that BMI is useless.

BMI is useless in discussions of health and ‘weight targets.’ However, when discussing concepts such as the forces of drag and friction exerted upon the human body, as is the case in this study, it is valuable.

@EX QUAKER unless you’re a bodybuilder, your fat percentage is probably not 7 and you’re really just chubby..