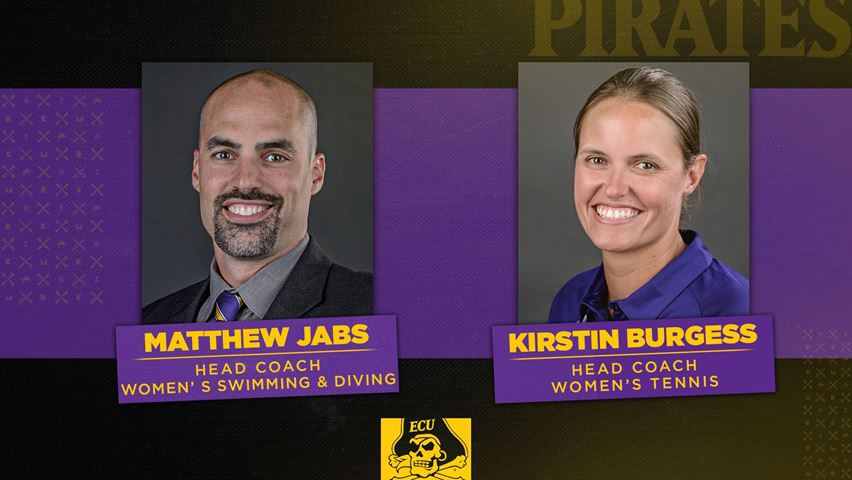 East Carolina has re-hired the head coaches of both the men's swimming & diving program and the women's tennis program after reinstatement. Current photo via East Carolina Athletics

Jeff Julian, who is the head coach of the ISL’s Cali Condors, will launch a new professional and post-grad training group at Mission Viejo.

Tasselmyer swam for the Bonnies from 2019-2021 under current head coach Skip Nitardy.

East Carolina University has announced the re-hiring of head coach Matthew Jabs as part of the school’s reinstating of its swimming & diving program. The school also reannounced the rehiring of Kristin Burgess as head women’s tennis coach – another program that was reinstated on January 7.

The moves are part of the school’s unwinding of some of the cuts to its athletics programs announced last year as part of an effort to save $4.9 million in its budget. Athletes who were part of both the women’s swimming & diving and women’s tennis retained a lawyer for a potential Title IX lawsuit, with attorney Arthur Bryant claiming that the cuts were in “flagrant violation of Title IX” based on the publicly available data.

The school announced that it would reinstate both teams and begin the process of hiring head coaches in order to begin recruitment of student-athletes, and in both cases the prior head coach was re-hired.

The school is planning to bring the programs back as soon as the fall of 2021, pending consultation with the newly-rehired coaches. In the interim, the official public database of UNC system salaries lists Jabs as an academic advisor at the pirate tutoring center. That included a reduction from his previous salary of $78,000 per year to $47,000 per year.

Jabs was the head coach of both the men’s and women’s swimming & diving teams from 2017 through 2020; the men’s team has not been reinstated. Prior to that, he served 17 years as an assistant at East Carolina to then-head coach Rick Kobe.

“I know Kirsten and Matt will positively impact the lives of our student-athletes, our department and the Pirate Family,” athletics director Jon Gilbert said. “Matthew Jabs has been a part of the swimming and diving programs at ECU for more than 20 years and his passion for the Pirates is well-documented.  He has had a profound impact on so many student-athletes at ECU and I know he’s excited to continue that leadership. He brings an excellent coaching resume and his strong relationships within the community and region are major assets in recruiting.”

“I’m excited to be back with the program and am appreciative for the opportunity,” Jabs said. “I am grateful for all of the support from family, friends, former teammates, athletes, and alumni over the past few months. As we start this new chapter one of our goals remains the same, and that is to make the swimmers and divers of the past, present, and future proud to be Pirates.

“There will be a lot of hard work in front of us, but I wouldn’t want to be anyplace else. ECU Swimming & Diving is special, and I look forward to the challenge of getting us back to meeting the level of expectations our swimming community expects.”

Burgess was promoted to interim head coach in March of 2020, after the retirement of the women’s tennis program’s prior head coach.

The East Carolina Pirates were the 2020 AAC champions in men’s swimming & diving, with four conference titles in six years as a member of the conference. The women finished 4th last year out of six programs. The team regularly qualifies swimmers for the NCAA Championship meet, including 1 female swimmer in 2020. Kristen Stege, in the first official mile race of her career, win the AAC title, broke the AAC Record, and qualified for the NCAA Championships. Stege previously announced that she will be transferring to Tennessee in the fall.

On the men’s side, the school was due to send butterflier Gustavo Santos to the NCAA Championships before they were canceled. He was the 18th seed in the 100 fly. Santos was a senior.

Unlike many programs, East Carolina did not have one final season, meaning the many members of the members of the swimming & diving program have already transferred, especially among the team’s highest performers in the pool.

The AAC, after UConn’s move to the Big East, has 5 women’s swimming & diving teams remaining: Houston, SMU, Cincinnati, and Tulane. Of those, only SMU and Cincinnati sponsor men’s swimming programs.

Happy to see that the ECU admin did the right thing. Finally. Go Jabs! Go Pirates!

Bummer. There goes my little sliver of hope that we could get someone new in there.

Do you believe that bringing in a new assistant coaches or supporting staff could make it better than what you believe it to be?

Sure any assistant would make it better but a different head coach would have been better for the program. Most of the championships mean nothing on his resume, he coached what maybe one or two boys while I was there for the first one and then heard only girls for a few year during which they were the worst in the conference. You can make almost anyone look good on paper.

Should have hired Mathias Jabs instead…