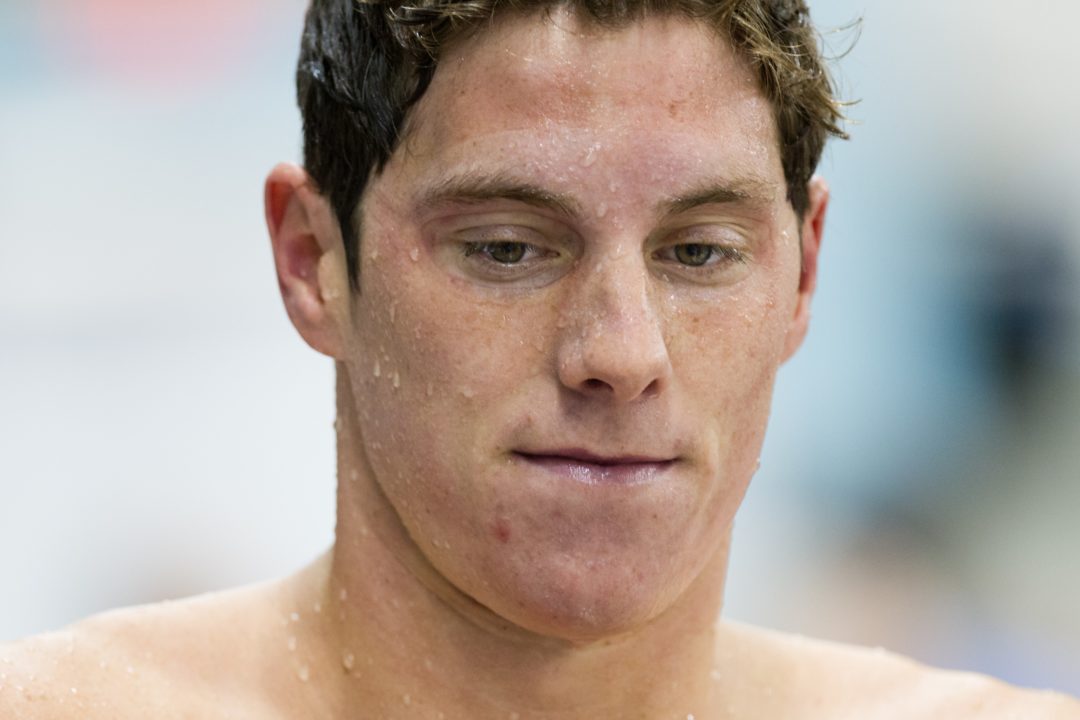 Conor Dwyer, thanks to a great prelims swim, will get a shot at the finals of the 800 free relay. (Photo Courtesy: ©Tim Binning/TheSwimPictures.com)

The Americans have named their men’s 800 free relay for tonight’s finals as Ryan Lochte, Conor Dwyer, Ricky Berens and Michael Phelps on the anchor: a position that he’s rarely occupied in his career.

Dwyer was the lone swimmer pulled up from the prelims relay after having the top split there in 1:45.5, and placing 5th in the 400 free earlier in the meet. He may have hit his taper as well as anybody on this American team. There had been some speculation that Peter Vanderkaay might get a chance though he didn’t finish in the top 8 at the Olympic Trials, especially after taking a bronze in the 400. The coaching staff, led by his coach Gregg Troy, has decided against that though.

France will counter Phelps on the anchor with Yannick Agnel, who will look to recreate his heroics from the 400 free relay where he ran down Ryan Lochte. This should be a much taller order, as Phelps is clearly a much better 200 freestyler than Lochte is a 100 freestyler. Still, the French should enter within striking distance as Agnel is joined by Gregory Mallet, Clement Lefert, and Amaury Leveaux.

China has also subbed-in Sun Yang on their anchor, which makes them moderately dangerous.

Interesting. Have to ask: Is Gregg Troy hiding Lochte from Agnel?

Naah. I’d sooner believe it’s more to not let Phelps have a flat start – help quell any potential distractions or w/e that might pop up if Phelps started the relay off in something that would’ve been competitive in the individually. (Don’t think he’ll be anywhere near what Agnel’s 1:43 low, but based off his split in the 400 free relay he could’ve definitely been in the running for 2nd.)

Loving the choice to put Phelps on the anchor. He’s got a knack for getting his hand on the wall which is more than can be said for Lochte if it ends up being a super close race

Love the choice too. This is a much more traditional relay order than we usually see from the Americans.

Not really sure Phelps needs that added stress, tbh. Especially with the butterfly final tonight too.

Boy Troy likes to play around with those anchor spots. I wonder if he put Phelps there because he thinks it is the USAs only chance of running Agnel down or if part of him wants to put him there because if he too can’t hold off Agnel maybe it would spare him (Troy) some of the ongoing embarrassment from the Lochte decision on the last relay.

Of course Troy is gonna pick a Gator over a Wolverine. Nothing against Dwyer love the guy

PVK has been swimming with UF for over a year…. And Dwyers 200 was better at trials and very good this morning. Better than even berens has done in london

comments like this are starting to make me sick

Berens over PVK was a good call. The Lochte decision on the 400 free relay was controversial enough, no need to open themselves up to more criticism in the case of disaster.

And randomly, I looked this up on the London2012 site literally right before this article went up. (Obviously checked here, first.)

That’s to say that Dwyer over PVK was a similarly good call.

Agreed. Some thought it might be a possibility after how well he swam the 400, but they clearly made the right call not using him. Would’ve made more sense to me to swim him in the morning – free medal!

Im confused as to why people think it wouldve been ok to NOT put berens on the relay…
1) he swam it individually and was 9th.
2)this was his actual qualifying event
3) a flat start of 1:46 transates to at least 1:45, and after all berens has always been a relay swimmer 😉

I agree. Berens earned it. And I just don’t believe PVK, after a 1:48 at trials would go faster. Berens is rested.

Putting Lochte on the 400 relay would be kinda similar to subbing PVK for Berens. (Except for the whole not actually qualifying through in the 200, where Lochte just scratched.)