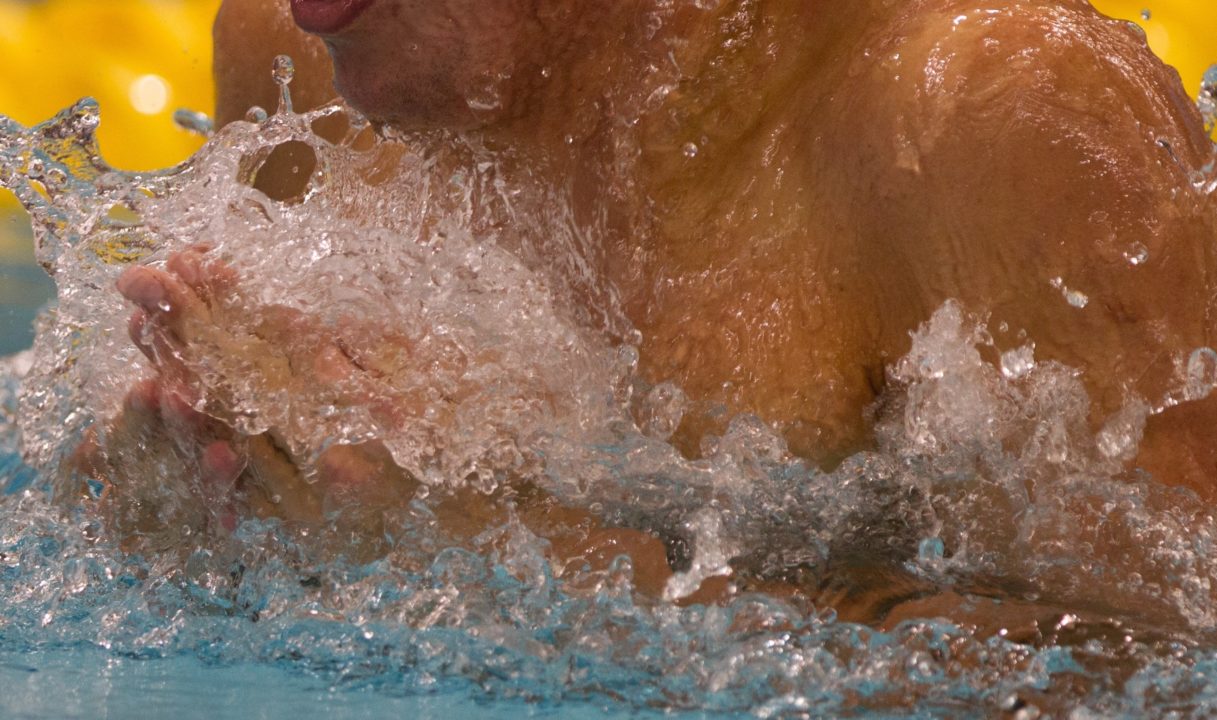 Yes, we’re back to this. Our old friend, the butterfly kick, has again reared its ugly head in the men’s breaststroke races, after the above video shared with us by Alex Pussieldi shared with us by Brazil’s Blog do Coach. The video asks the question “breaststroke or butterfly?” and seems to be right on the mark, and fairly indisputable.

The underwater footage on the start of the men’s breaststroke shows just about everyone in camera frame doing multiple butterfly kicks on their underwater pullout (by rule, each swimmer is allowed only one, and only after their hands have separated). Perhaps the worst offender is South Africa Cameron van der Burgh, who would go on to break the World Record in the event.

This hearkens back to the World Championships in 2011, where multiple swimmers were seen with clearly illegal dolphin kicks. We wrote then that breaststroke is a sport that has always been about pushing the limits of the rules and trying to gain advantages (read that here).It’s one of the few strokes where the form even allows such variations.

FINA apparently hasn’t learned their lesson, and chose not to institute any sort of underwater video monitoring to guard against these sorts of things, even at the highest-level meets where underwater cameras are installed anyway.

Every swim coach in the world, at every level, knows that a butterfly kick done upon entry from a dive is both indistinguishable in the splash, and hard to separate from the momentum of entry. This is not a tactic unique to the South Africans, the South Americans, the Europeans, the Japanese, or anybody else. It’s done at every level of swimming. If FINA hopes to curtail this practice, FINA has one of two choices: either they institute video monitoring, or they cut down on cheating by deregulating the butterfly kick.

That would include allowing a butterfly kick on the last stroke into the wall, and somehow devising a way to give everyone the equal opportunity to “cheat” on the pullout without disrupting its nature. In the past, they’ve shown the propensity to use this strategy instead, such as when one dolphin kick was allowed.

How would you regulate that? It would take some serious creativity. Perhaps unlimited dolphin kicks are allowed for the first 5 meters, with the presumption that the splash has calmed enough at that point for on-deck officials to observe under the water. 5-meters is already marked on most pools with flags and a change in lane-rope color or pattern, so it wouldn’t require an increase in equipment.

Whatever is done, the issue must be corrected. It’s a similar situation to when a large portion of a sport’s athletes are presumed to be doping, like baseball in the late 1990’s. The lack of regulation leaves athletes in a position where they have to choose between following the rules and being successful with the chance of being caught and exposed in front of the whole world.

The best way to stop this is have officials looking at each lane underwater. The technology to do so is there and officials cannot see these kinds of infractions from the surface.

I find it peculiar that the person responsible for modern day dolphin kick is trying to stifle a swimmers creativity. He’s utilizing the lack of underwater judges like you utilized the lack of a rule against dolphin kick for 20+ meters. He deserves at least a couple points for creativity. The quickest way to solve this problem is to create a 15 meter dolphin kick rule for breaststroke.

As you say, when David first started doing extended underwater dolphin kicks there was no rule against it. But there is a rule against it in breaststroke, and the only “creativity” being used is in ways to get away with rule infractions.

The problem with the underwater technology is probably that not all pools can use them (or meet hosts have the budget to get them). That means there is an uneven playing field, and swimmers in those “lesser” meets can get away with more.

But it is probably the best bet. If we outlaw the dolphin kick, we’re back to where we started. They began allowing it because it was hard to differentiate from “natural undulation” after starts/walls.

did u see the dqs at usms nationals? they were specifically looking for what we saw in the video here, as stated by coach turner of maryland masters, dolphin kicks before the initiation of the arm pull. As she told me, the idea was that since not everyone in masters streamlines like the FINA elite level swimmers as seen here will, to standardize their interpretations of the international rule they would just say ‘no kick before pull’ it seems like this would have gotten a hand raise in Greensboro but not in London apparently

Ah yes….. the Mark McGuire defense. It wasn’t illegal…. so it must be legal.

I thought I recognized that name – that’s fantastic.

SnowBro, Berkoff didn’t break ANY rules that existed at the time. Van Der Burgh knowingly broke a rule that’s currently on the books. Just because you used the same verb “utilize” in two sentences doesn’t make it anywhere close to a valid comparison. And you want to give him points for “creativity”? I think “cheating” would be a more appropriate word. Plus, Van Der Burgh isn’t being creative and inventing a new technique; swimmers were already allowed to take one butterfly kick during the pullout. He just decided he could take more than one and get away with it.

I completely agree with David Berkoff and what Braden Keith wrote in the article: we need judges looking at the underwater cameras ASAP.

If the dolphin kick so soon off the start doesn’t provide propulsion that exceeds the speed generated by the dive, isn’t the drag created by breaking the streamline actually slowing him down?

I was gonna say, I don’t think it actually helps.

The ones these guys do into the turns at the finish though, those are useful.

it’s clear as day, no one can deny it. unfortunately, because FINA refuses to enforce their own rules, i see it becomming rampant. “heck, if he can win an Olympic gold medal & set the WR, what’s stopping me!” Silva won gold using this tactic. van der Burgh won gold. who is next? Kitajima?

Next is Kitajima? Kitajima has been using that illegal tech since his ealry days..