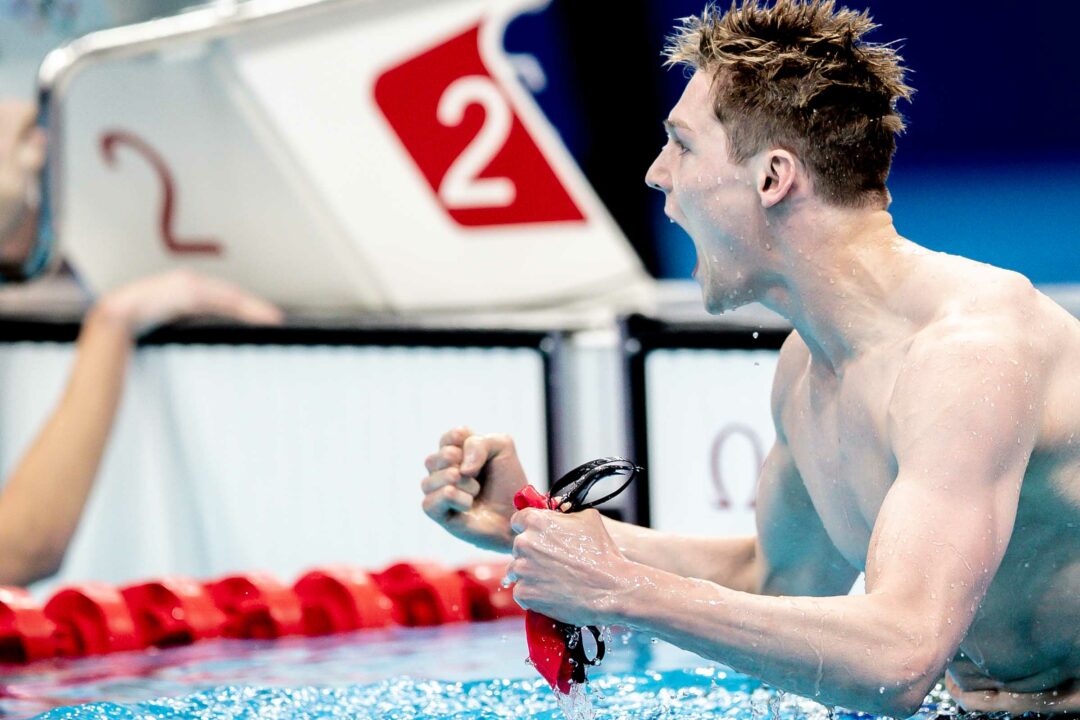 Day 6 finals was an exciting session for the nation of Great Britain, as both Duncan Scott and Luke Greenbank landed on the podium in their respective events of the 200m IM and 200m back.

For Scott, heading into the 200m IM final the 24-year-old University of Stirling star had already collected gold as a member of GBR’s men’s 4x200m freestyle relay and doubled up with a silver in the 200m free individual event.

In this 200m IM, Scott bided his time in the fly and backstroke legs before changing gears in the breaststroke and then sealing up silver on the freestyle leg. Ultimately he hit the wall in a time of 1:55.28, just .28 shy of Chinese swimmer Wang Shun’s gold medal-worthy 1:55.00.

Scott’s time represented a huge lifetime best, knocking .62 off of his previous British record logged at the British Olympic Swimming Trials this past April.

With his 3rd medal now in his pocket here in Tokyo combined with his two relay silvers from Rio, Scott ties 1908 Olympian Henry Taylor as the most decorated British Olympic swimmer of all time.

After his historic result, Scott stated, “It was always going to be a tight race, an exciting race. The winner did a big personal best as well, it’s probably a lot quicker than people anticipated the final to be going in, so credit to everyone in the race.

The Steven Tigg–trained athlete continued, “I had to try to commit a bit more to the 150m because I know I’ll come back strong. I’ve done that and I’m really happy with the swim, it just wasn’t quite there. It’s only three years to Paris, I might hit puberty before then!”

“I’m happy with that race – it’s my first international medal in that event. It’s a big personal best again, I think I’ve taken well over a second and a half off that this year, so I have to hold my head up high with that.

“This isn’t just a one-meet thing for British Swimming, it’s been going on for a while. It probably started with Adam Peaty back in 2015 when he first won the World Championships and then all the way through, his mental drive and the way he dominates races, it rubs off on people. On top of that, there’s also some excellent coaches in British Swimming who always strive for more and manage to get the best out of their athletes day-to-day, it’s a collection of things.”

If he isn’t on the men’s medley relay then Peaty will likely overtake him with the two medley relays.

You expecting them to leave their 46.1 anchor off the relay??

Oh, duh. I was thinking Proud for some reason but forgot he’s not very good at the long-course 100.

Always out-touched at every sigled major meeting ( Olympics, World Championships, European Championships ) at every single individual race. That’s a mental problem right there, and unless he doesn’t fix that, we cannot call him a real champion.

He’s won individual titles at Euros and Commonwealth games though… He’s been beat in these Olympics by two people who swam out of their skin and dropped a big PB (as he did), don’t think that’s mental…that’s just sport

I’m not saying he is not amazing, but without an individual gold at Olympics or Worlds we cannot consider his a real champion. Like Morozov

Don’t say “we” like you speak for the swim community. You’re entitled to your opinion, but it’s just that – your opinion.

Eddie you are speaking absolute codswallop

…”out touched”? Beaten, yes; but out-touched, definitely not. If anything, he out-touches. I’m British, and without taking anything from Tom Dean, Duncan was unlucky with the result in the 200 free (go and watch that finish again), but I’m proud of both lads.

With the 200IM, he simply wasn’t the fastest, with ‘out-touching’ being a rather strange (and inaccurate) way to describe what happened in the race.

Remind me how many individual gold medals Jenny Thompson won?

who tf even is jenny thompson? y’all soft…. and everyone saying he not a champion cuz he ain’t got individuals u right… champion is a winner… second ain’t no different from last, it ain’t first

You guys and Eddie should check out the ‘Winning vs. Succeeding’ article SwimSwam put out yesterday

what even are those bogus made up meets

He’s not the most decorated British Olympic athlete of all time (as the article currently states). There are a number of others (specifically rowers, cyclists) who have more medals.

However, he will become the most decorated British Olympian of all time at a single games if he wins another medal, which you would expect from the 4×100 medley relay.

and the mixed medley he swam the heats yesterday

I must have been blind if this happened

A legend already, he’s got at least one more Olympics in him too.

Definitely. Someone asked him about the next Olympics in three years and he responded “maybe I’ll hit puberty by then”. He’s awesome

I’m dying laughing at ur name

Absolutely chuffed to bits for this bloke xx luv

Congratulations to Duncan, but swimming is probably the easiest sport to rack up medals in.

It’s so easy it’s taken since 1908 for another GB swimmer to win 5 medals! Child’s play!

He really seems like a genuinely good person in addition to being a clutch athlete for his team. What’s not to love?