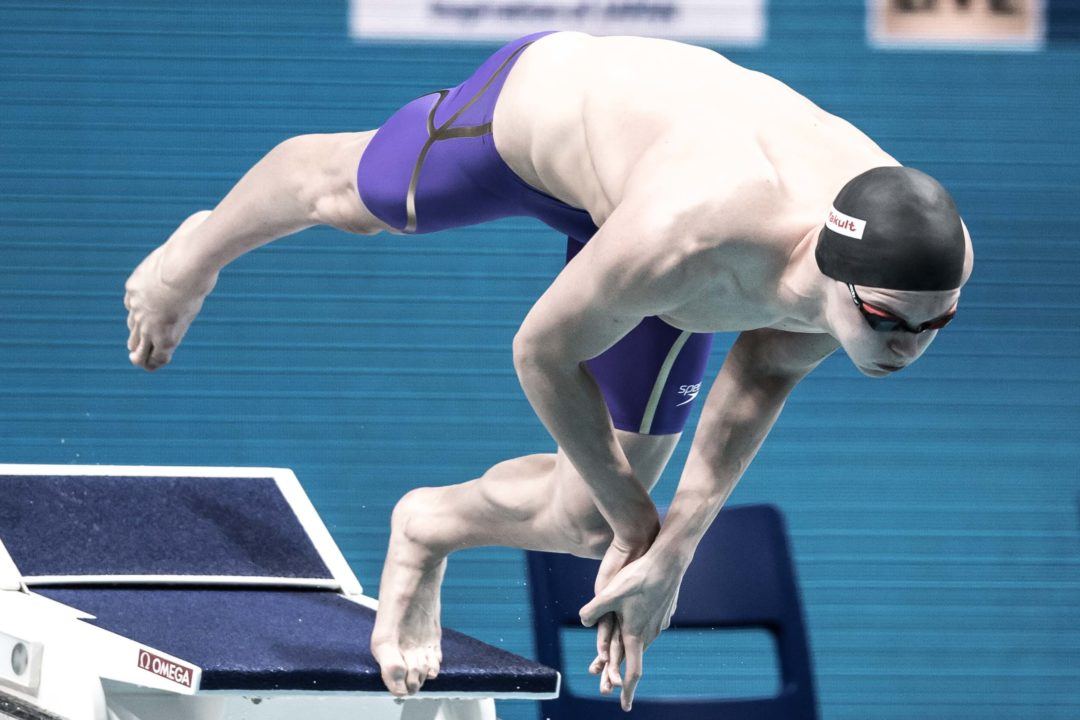 Olympic finalist Duncan Scott was in the water yesterday, but made his first finals session appearance tonight in Edinburgh. Archive photo via Mike Lewis/Ola Vista Photography

After sitting out of last night’s individual finals, two-time Olympic medalist Duncan Scott took to the Royal Commonwealth Pool tonight to take his first Scottish SC national title of 2017. Leading wire-to-wire, Scott took the gold in the men’s 200m IM event in a time of 1:55.85, keeping a comfortable distance ahead of former Stirling teammate Dan Wallace throughout the entire race.  For the Scot headed to Copenhagen next week, Scott produced the 2nd fastest time of his career in this SC event with tonight’s victory.

Wallace, who now trains at Edinburgh, finished in 1:56.18, a mark that checks-in as the 2nd fastest of the 24-year-old Commonwealth Games champion’s career. The former Florida Gator already earned 2 titles on night 1, topping te podium in the 100m fly and 100m IM events.

Scott opted out of the 100m freestyle event, a race in which he finaled in Rio where he wound up 5th overall. In the Scottish national record holder’s stead was David Cumberlidge of Edinburgh, who doubled up on his 50m free gold from last tonight with the top prize this evening with his time of 47.59.

Perth City’s Stephen Milne was runner-up in the race, touching less than a tenth behind in 47.66. Milne was last night’s 400m freestyle winner.

Stirling went 1-2 in the men’s 100m breaststroke race, led by two-time Olympian Craig Benson. Benson was able to hold-off teammate Ross Murdoch (who went sans pull-out at one wall due to reportedly choking on water) to earn his 2nd title of the meet, taking the 100m breast in 58.70 to Murdoch’s 58.85. Young Zak Aitchison, also from Stirling, rounded out the top 3 in a mark of 59.39.

On the women’s side of the house, Corrie Scott snagged 2 meet titles in the session, starting with the 50m breaststroke sprint. The 24-year-old Edinburgh athlete wrangled up the win in 30.80, finishing ahead of age group standout Katie Robertson of South Ayrshire. Robertson had already made a name for herself last night, breaking the Scottish Junior record in the 100m breaststroke. The young South Ayrshire’s time tonight accomplished the same feat in the splash n’ dash.

Veteran Aberdeen racer Hannah Miley took the women’s 400m freestyle in 4:07.50, representing the only woman to venture under the 4:10 threshold, while Lucy Hope doubled up on her 100m free win last night with the 50m victory this evening. Hope earned the only sub-25 second time of the field, clocking 24.77 for the win.