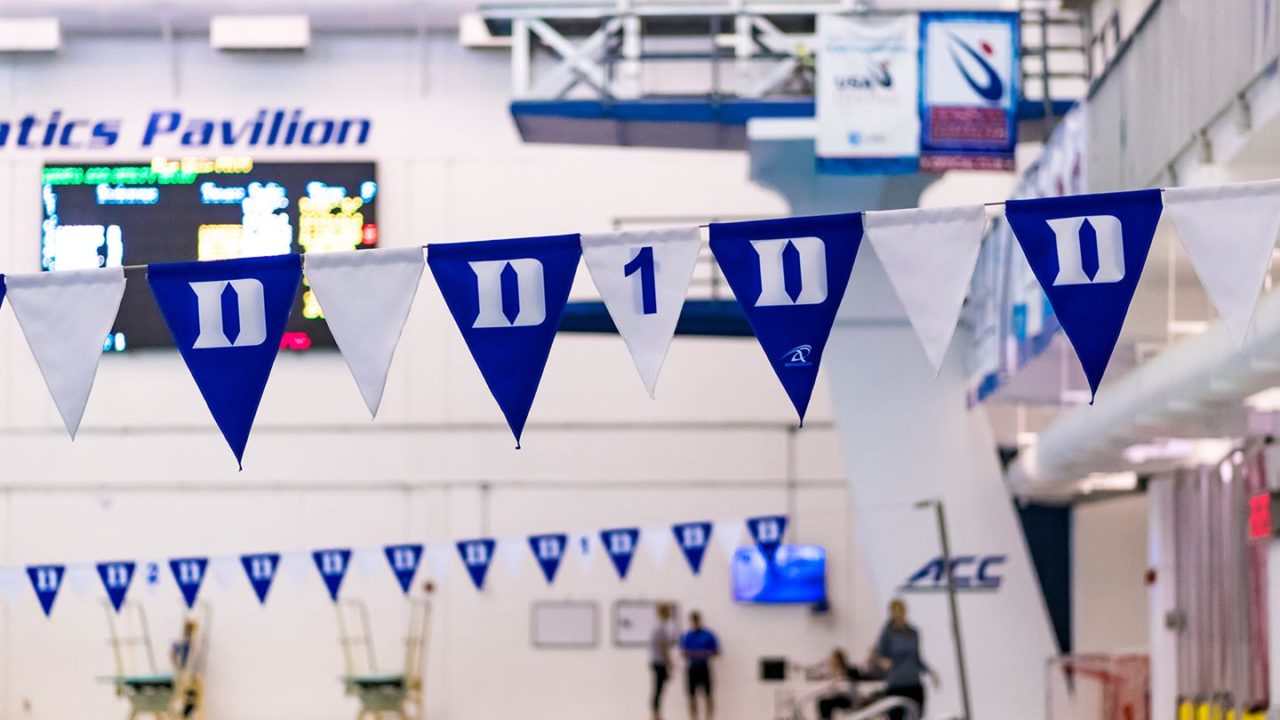 The 2020-21 awards were the Above and Beyond Award, Blue Devil Award, Most Outstanding Performances and Most Valuable Athlete. Stock photo via Duke Athletics

DURHAM – The Duke swimming and diving program hosted an outdoor end of year banquet to wrap up the 2020-21 season on Thursday evening.

At the banquet, four awards were given to select student-athletes. The 2020-21 awards were the Above and Beyond Award, Blue Devil Award, Most Outstanding Performances and Most Valuable Athlete.

“Last night’s banquet put a close to the 2020-2021 season, said head coach Dan Colella. “As we presented these awards it was truly amazing to see all the great things this team accomplished this year in the year of COVID. I have no doubt that even in this year, which has been so different and challenging, there have been numerous great memories and friendships established. As our seniors pointed out in their speeches, truly enjoy these years because they go by so quickly and that these were four of the best years of their lives. We are incredibly proud of our award recipients, as well as the entire team on a year of pursuing athletic and academic excellence.”

Returning to the pool and competing within COVID protocols, the 2020-21 season was one like no other. The team succeeded amidst the difficult circumstances, recording 65 Top-10 times in Duke history and saw eight Blue Devils earn a spot at the NCAA Championships in Greensboro, N.C.

Junior David Hallaron and freshman Sarah Foley received the Above and Beyond Award. The duo was recognized for having gone above and beyond the expectations of the program in dedication, work ethic, commitment and performance.

Hallaron and Foley both set school records in the pool this season. Hallaron broke the school record in the 500 freestyle, clocking a time of 4:22.33 while Foley’s 2:08.98 in the 200 breaststroke was the fastest in school history.

The Blue Devil Award is given to those who exemplify the true character of a Duke student-athlete. They are committed to their team’s betterment in academics, athletics, community work, motivation, encouragement, dedication and attitude. This year, sophomore Coleman Kredich, sophomore Will Tenpas and senior Ellie Winslow were named the Blue Devil Award recipients.

Kredich was sidelined by a season-long injury during the 2020-21 campaign but maintained a vital role on the team with his leadership as a first-time captain. Tenpas recorded career-best times in the 100 and 200 breaststroke (55.16 and 1:59.93, respectively) while representing Duke at the 2021 ACC Championships. A two-time award winner, Winslow served as a captain for the Blue Devils in addition to breaking into the top-10 chart in three-meter (321.98) and platform diving (256.20).

Four Blue Devils received recognition for Most Outstanding Performances. The award is given to one male and female swimmer and diver referencing an outstanding performance throughout the season.

In the pool, sophomore Emma Shuppert and junior Matthew Whelan earned the recognition. Shuppert’s time of 51.89 in the 100 backstroke at the NCAA Championships broke a school record earned her All-American honors for the second consecutive year. Whelan swam a program-record time of 1:42.41 in the 200 butterfly at the UNC Last Chance Meet to beat the previous school record by two seconds. In addition, his time earned him qualification to make his debut at the NCAA Championships just two weeks later.

Junior Cole Reznick was named the men’s Most Valuable Athlete. Reznick, a native of Pleasanton, Calif., served as a leader in the pool. During the ACC Championships, Reznick tied a teammate to lead the Blue Devils with 24 points in the meet, including placing 10th in the 200 individual medley with a career-best and school-record time of 1:44.61 and 19th in the 100 breaststroke with a personal-best time of 53.32. His time in the 100 breaststroke placed seventh all-time at Duke. In addition, Reznick recorded a time of 1:57.69 in the 200 breaststroke during the season, the sixth-fastest time in program history.

Watson was named the women’s Most Valuable Athlete as she enjoyed another stellar year in her sophomore season at Duke. She became the first Duke diver in program history to earn back-to-back All-ACC honors in the same event as she finished third in 2020 and second in 2021 in platform diving at the ACC Championships. In addition, the Fort Lauderdale, Fla., native earned honorable mention All-American honors for the second consecutive year in platform diving.