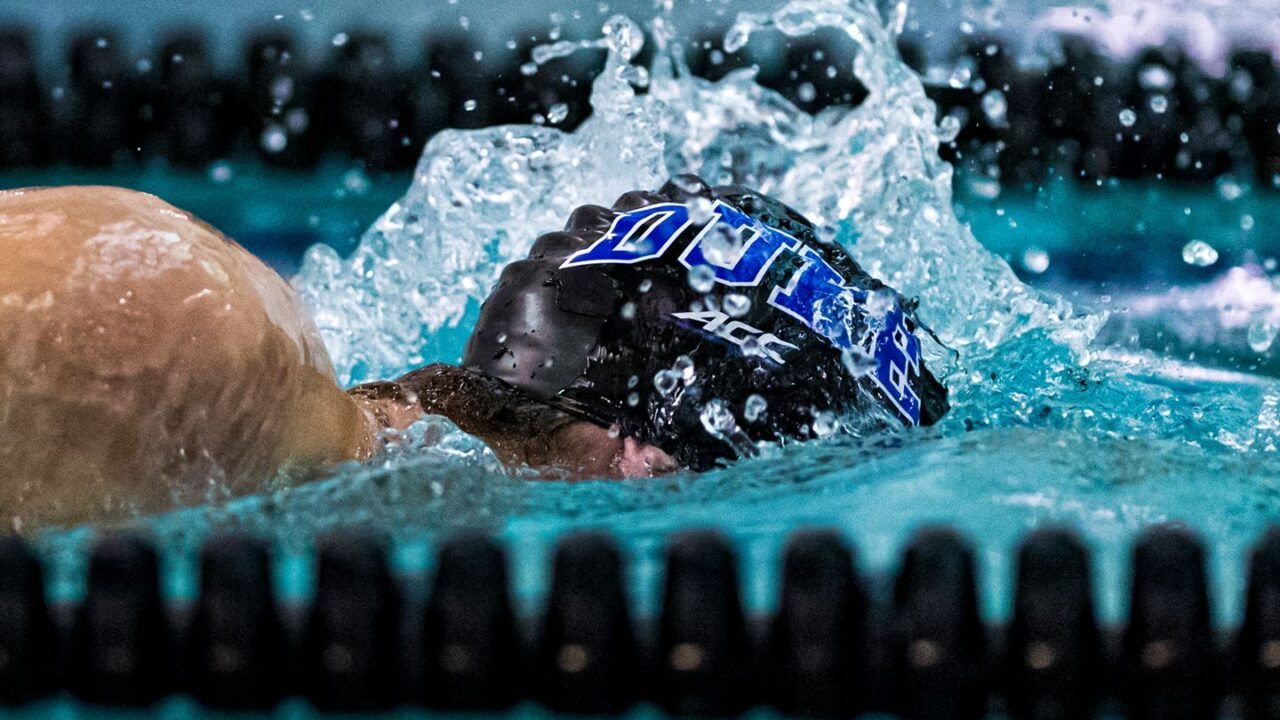 Duke swept Boston College and UNC Wilmington at a tri-meet on October 29 and 30, including a school record performance from Cole Reznick. Stock photo via Duke Athletics

Duke swept the wins in its home opener against UNC Wilmington and Boston College over the weekend. The Blue Devils led during both days of competition, not letting either team catch up to them, despite exhibitioning the last eight events.

Duke’s seniors paved the way for the team’s runaway success. Seniors David Hallaron and Reznick won two individual events each. Hallaron won the 200 back (1:49.66) and the 500 free (4:33.37). Hallaron made major improvements in the two events last season, with his career bests of 1:44.19 in the 200 back being the second-best in program history, and 4:22.33 in the 500 free breaking the school record. Though he’s off those best times, Hallaron’s two swims at the tri-meet are the best of the season so far for Duke.

Senior Matthew Whelan also won an event, the 200 fly, with a time of 1:50.48. Other top swimmers for Duke included sophomore David Chang — whose winning 50-backstroke time clocked in at 23 even — junior Charlie Gingrich with his 21.97 50 fly, and junior Coleman Kredich winning the 100 free in 44.83.

UNCW had three event winners at the meet. Freshman Sam O’Brien won the 1000 free in 9:23.29. That time is the best in the CAA this season. O’Brien is also strong in the 200 back, where he competed and placed seventh at Wave I of 2021 U.S. Olympic Trials, but his 1:51.98 time at the tri-meet wasn’t enough to beat Duke’s Hallaron and Jack Christian, or O’Brien’s fellow freshman teammate Will Barker.

The final UNCW event winner was Gianmichael D’Alessandro, who won the 100 breast in 55.31 seconds, also the fastest time for UNCW this season.

The CSCAA ranked the Duke women as No. 24 in the country, and the tri-meet featured top performances from the women, including O’Meara’s second-best 1-meter diving mark in the program’s history, and Foley’s second-fastest 100 IM for the program.

Foley led a 1-2-3 sweep of the 100 IM, and the second- and third-place finishers, sophomore Catherine Belyakov and grad student Alicia Harrison, also finished with times that placed in the top five in the program’s history.

Chang also recorded the fastest 400 IM time for the women with her exhibitioned 4:21.89. Chang had previously placed fourth in the 400 IM at the 2019 Winter Junior East Nationals.

For UNCW, Brooke Kinsley clocked a 10:17.31 in the 1000, earning second and finishing with a CAA-leading time.

Boston College returns to the pool in a tri-meet with Northwestern and Drexel on Nov. 5 and 6. Duke will host Georgia Tech on Nov. 6. UNCW will host a CAA Pod Meet with James Madison, Delaware, and William & Mary on Nov. 6 and 7.