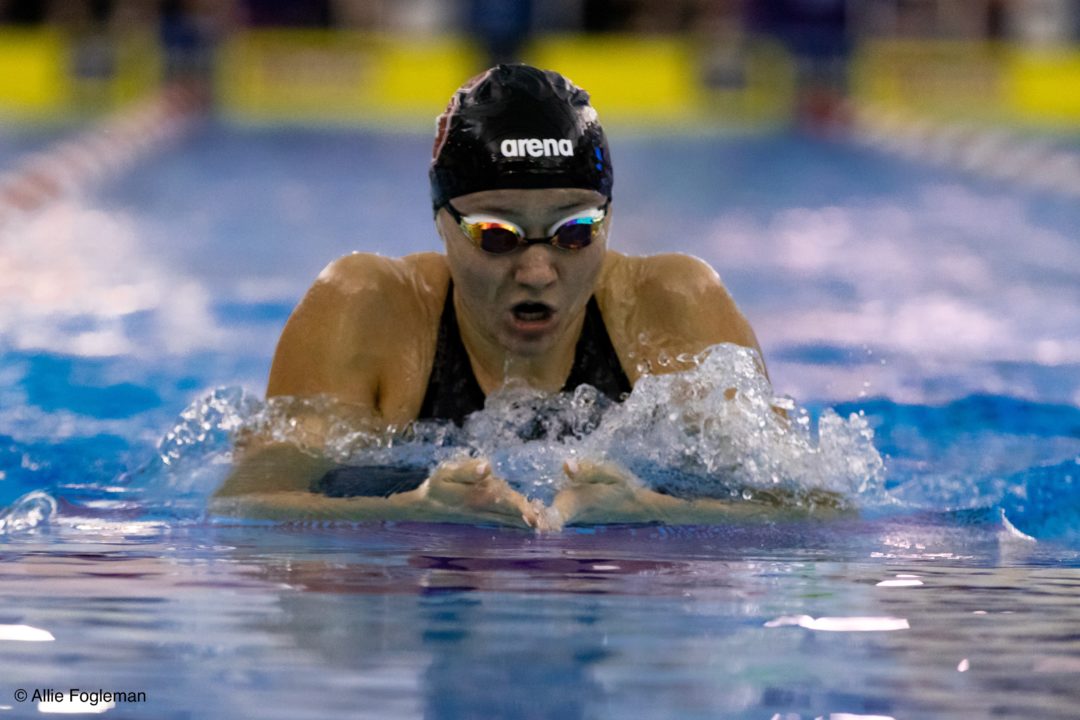 The reigning NCAA Champions of Stanford won all but one event in the pool on Friday against Pac-12 rival UCLA. All-American Katie Drabot was a standout. Archive photo via Allie Fogleman

Freshman Rachel Rhee stopped the Cardinal from sweeping the events. She won the 100 free for the Bruins, coming from a nail behind to outsplit Stanford’s Lauren Green on the back half. Rhee won it in 50.56 to Green’s 50.62.

No. 5 Stanford continues its Los Angeles road trip on Saturday when it faces No. 24 USC.

The loss snapped a winning streak of seven meets for the Bruins, who dropped to 7-1 and 4-1 in Pac-12 competition. The Cardinal improved to 5-0.

Freshman Rachel Rhee claimed UCLA’s lone win of the afternoon, finishing the 100 free in 50.56, the second-best time of her collegiate career.

Freshman diver Hannah Butler also had a standout afternoon, setting new PRs and nailing down NCAA Zone Championships-qualifying scores in both 1-meter and 3-meter diving. She becomes the fourth Bruin diver this year to qualify for Zones.

The Bruins started the meet with a narrow loss in the 200 medley relay. The UCLA As led after the first half of the race thanks to strong backstroke and breaststroke legs from Sophia Kosturos and Claire Grover, respectively. Both of Stanford’s relay squads were hot on their tails however, with the Bs ultimately squeaking out a win at 1:39.36, just ahead of UCLA’s 1:39.80.

That was the first of many close calls for UCLA in the meet.

Grover just missed out on a first-place finish in the 100 breast, as her 1:01.99 was just over a half-second behind Stanford’s Allie Raab. Just a few minutes later, her 22.93 in the 50 free was .07 seconds behind first place Emma Wheal.

The 200 fly was the closest race of the day, with the top three swimmers finishing within .19 seconds of each other. Senior Amy Okada led for the majority of the race but ended up a tough-luck third at 1:58.92.

Butler was the runner-up in the 1M championship, which began about an hour before the swim portion of the meet. She posted a score of 273.60, the best by any Bruin this year not named Ruby Neave. That mark topped her previous best of 253.28.

She followed that up with a third-place showing in 3M, tallying a collegiate-best 286.73. Both of her scores were Zones-qualifying marks. Neave was the runner-up in 3M at 298.20, her third-best score in that event this year.

B Forde, the Defending NCAA 500y and an even better 400IM does not show up in either the UCLA or USC results. Is she ill or is Greg just saving her for the Cal meet?

Amalie Fackenthal was missing from the past few meets too (finally swam today). I noticed this happened last year as well where swimmers would disappear then re-appear and them sometimes disappear at other meets. Does he just give some swimmers days off possibly for certain meets? I mean I don’t really understand it but Stanford is in a position where they don’t need everyone to win a dual meet. I would hope everyone swims at the Cal meet.