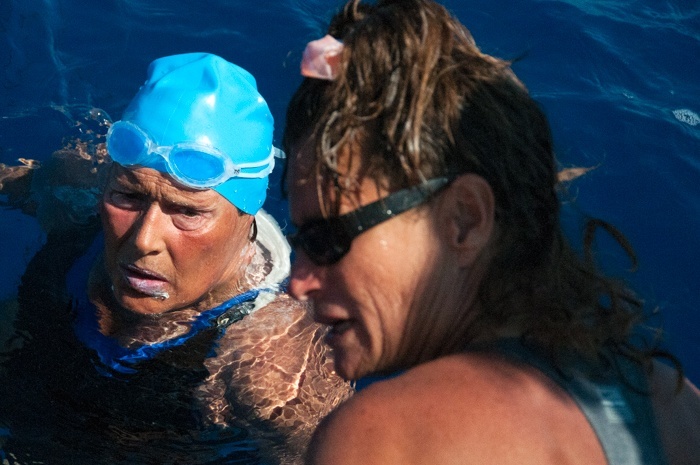 Today a panel of marathon swimmers (including several who spearheaded skepticism regarding the validity of her Cuba to Florida swim) and media convened via teleconference to hear directly from Diana Nyad, her navigator John Bartlett, and her crew chief Bonnie Stoll.

Nyad led off the call by thanking the group for the opportunity to address the group and offered complete transparency with regard to data and information regarding the swim. She affirmed her respect for general rules of marathon swim community: never grab on to the boat or another person. She affirmed her and her teams’ commitment to the “basic rules of having any aid for floatation or propulsion”

John Bartlett conducted 100’s ‘modeling’ exercises over the past several years on the route between Cuba and Key West. In fact, one model showed that the swim could have been completed in 37 hours. Bartlett explained in great detail when the weather lined up the currents were ideal for the swim. “The good gulf steam is what allowed this thing to happen.”

Panel members appeared to be mixed between skeptical and curious. Many of the questioned were very nuanced and concentrated on ocean currents which were very favorable for Nyad’s swim.

Nyad affirmed to the group – what I witnessed during her second 2011 attempted – the orders were clear and consistent that she was not to be touched while in the water.

“I never touched the boat in any way” Diana Nyad emphatically reported to the group.

After 3 hours of discussion, it was clear the marathon swimmers are passionate about putting ‘fence posts’ around the definitions of what constitutes a ‘real’ swim. But ultimately Nyad and her team were forthcoming and open in answering all the question posed by the group.

1) Diana Nyad did swim from Cuba to Florida,

3) Diana Nyad didn’t float on anything, including the boat,

4) the currents were favorable,

5) She didn’t adhere to all the rules that some feel are important (purist call for only a suit, cap and goggles – Nyad wore a protective mask and non buoyant body suit),

6) what she did was phenomenal by all standards of human physical achievement.

This article didn’t clarify #5, the vague “She didn’t adhere to the rules that some feel are important.” But I noticed paragraph 5 got cut off, so maybe that’s where the information was. Please update it, thanks.

it seems the naysayers are quiet today!, Were they satisfied, no facebook post, no haters, what was the open water peoples opinion? NO interviews today, is an apology posted? JUST CURIOUS? There are no rules in making the cuba to florida swim except not in a cage, YES< I would have loved to see Penny Palfrey make it, my swimmers were on her crew, MS, NYAD on her 5th try got lucky with currents, as we all know the swim Gods said we will give her the current, she deserves it.. An open apology should be coming, but where is it. YES , she maybe a little crazy, I say anyone who does these swims are, I would not, but… Read more »

I don’t see why an apology is needed, but I do think they need to issue a statement on whether their questions have been answered to their satisfaction.

So, on #5, while I’m by no means a purist and will be the first to don a wetsuit below 64 degree water temps, these are not just arbitrary rules that a few folks in the OW community adhere to … these are the rules that the majority of the recognized major OW events (e.g., English Channel, Catalina Channel, Manhattan Island Marathon, etc.) abide by. I think a more accurate statement would be, “She didn’t adhere to the standards/rules set by the major swims in the marathon swimming community.”

She’s nuts. Without a large support crew during her five attempts, she would not be living today.

I’m finished reading about this lunatic.