Despite Missing Some Top Swimmers, Ohio State Triumphs at Denison 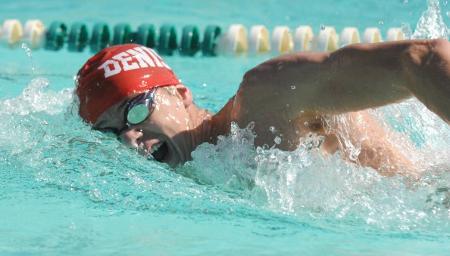 Denison freshman Stuart Hohm was the only double-winner for the Big Red, as he took the 200 and 500 free against OSU. Archive photo via Denison Athletics

The Ohio State Buckeye 9th ranked men’s squad traveled down the road to Granville, Ohio for a dual meet with Denison in OSU’s first meet of the new year. OSU won with a final score of 189 to Denison’s 111, despite missing numerous top swimmers from their lineup, most notably Josh Fleagle, DJ Macdonald, and Steven Zimmerman.

The Buckeyes, who kicked off the meet with a win in the 200 medley relay (1:33.06), won nine swimming events and swept diving en route to their 78-point victory over Denison. Directly after that medley win, OSU freshman Brayden Seal swam a big 9:23.91 in the 1000 free, breaking the pool record in the process. Seal won by over 20 seconds over teammate Matt Moen (9:49.61).

Tomorrow is Denison’s final home dual meet of the season as they’ll host another Division I opponent, Pittsburgh, at 1pm. OSU will take on a conference foe in Michigan State on January 23rd at 4pm ET in East Lansing, MI.