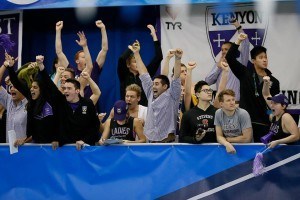 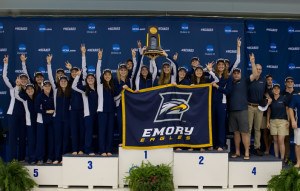 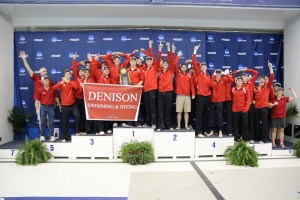 Swimming in the penultimate heat of the men’s 200 IM at NCAA Division III championships, Denison junior Jackson Lindell took a chunk out of the NCAA national record, going 1:46.07. The previous mark of 1:46.23 was set by Andrew Wilson of Emory at the 2015 championship. Wilson is currently taking a redshirt year to train at University of Texas in preparation for 2016 Olympic Trials.

Lindell’s previous personal best was 1:47.93 which he achieved at the Miami University Invitational in December 2015. Here are comparative splits of Wilson’s 2015 NCAA record and Lindell’s 2016 NCAA record:

Lindell was able to make up for Wilson’s exceptional breaststroke split with his back and free, each of which were a full second faster than those of Wilson. Tonight he will be swimming in finals against Evan Holder of Johns Hopkins, who qualified with 1:46.85.

That was quick. The best swimmer in D-III history, Wilson, gets a record broken just a year after. But, watch out: he’s on an Olympic break this year, so he’ll be back to Atlanta! Go Eagles!

Awesome swim. heading into this meet I thought Holder would take this event handily, but Lindell really stepped way, way up. But watch out for Holder to challenge him tonight and re-break this record. Holder was out a full second faster than his 1:46.8 from December and went the same time. I’m thinking he shut it down on the back half and is going to tear it up tonight. Should be a great race