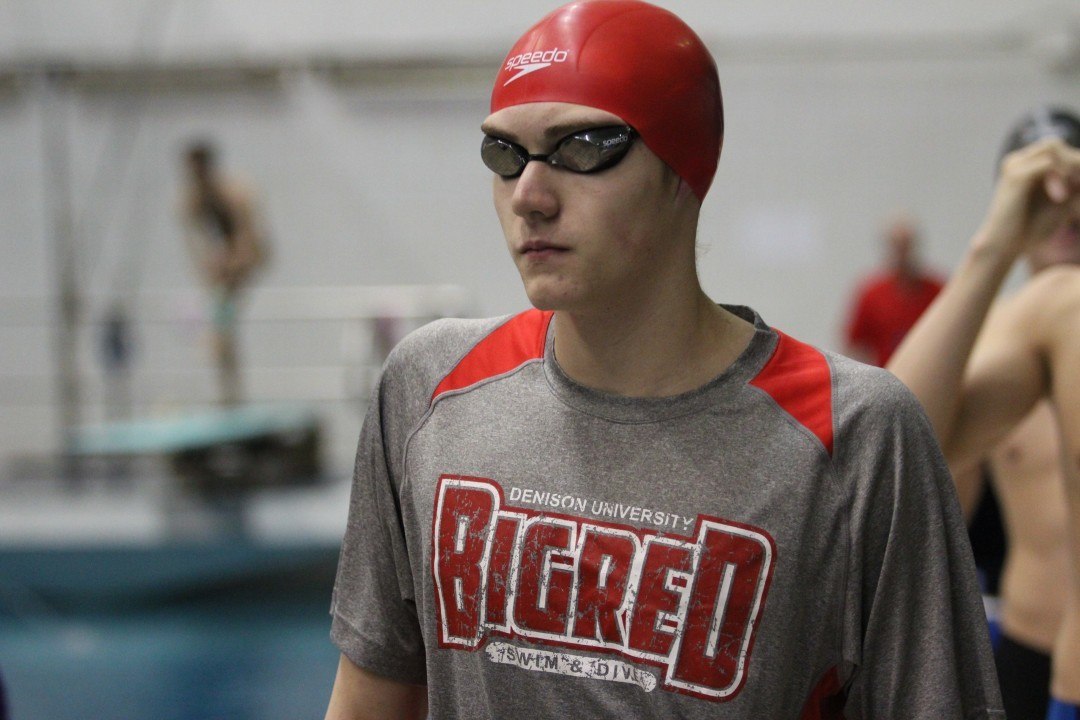 The Division III crew this year is amping up the way they prepare for the NCAA meet, and Big Red... Current photo via NCAA Staff

The Division III crew this year is amping up the way they prepare for the NCAA meet, and Big Red is no exception. Seeking out and competing against the best is an excellent strategy for making the big meet at the end of the year less intimidating. And a perfect way to get in some top quality racing!

Denison faced off against OSU’s Buckeyes on Friday and then against Pittsburgh on Saturday. While both duals culminated in defeat, the Big Red still managed to give its DI opponents a challenge.

At the beginning of the season, Big Red men faced off against the Buckeyes and came out  153 points behind. This time, the score was much closer, with OSU coming out on top 189-111. Big Red claimed four event victories and eight runner-up places over the course of 16 events.

Immediate after, Denison claimed its first of four victories, with Stuart Hohm leading a top three sweep of the 200 freestyle. Hohm touched in a 1:42.42. His season best is a 1:38.40 which puts him as the 4th fastest in the division at this time. In Hohm’s next event, the 500 freestyle, he carried out the same feat, taking the win with a 4:40.41, over four seconds ahead of his teammates.

In the 1 meter diving, another pool record came down, with Stephen Ettienne of OSU posting a 360.08 to break Connor Dignan’s record, set in 2012. Dignan also competed in the event and finished sixth, behind teammates Max Levy (4th) and Connor Dorff (5th). On 3 meter, Ettienne took down another of Dignan’s pool records, posting a 390.30.

Andrew Rich took control of the men’s 100 butterfly en route to the fourth win for Big Red, leading from start to finish and posting a 50.80, nearly a second ahead of second place. Rich is currently ranked 13th in the event nationally with a season best of 49.34.

To close out the meet, Denison’s A relay of Ryan Fleming, Conrad Wuorinen, Damon Rosenburg and Max Howes posted a DIII B cut time of 3:04.45 to win by just over a second. Wuorinen had the fastest leg of anyone in the event with a 45.76 split.

On Saturday, the men and women of Denison took on DI opponent, Pittsburgh. The women took home three victories, losing 201-96. The men claimed five wins en route to their final score of 178-120.

Pittsburgh started the meet off with a decisive victory in the women’s 400 medley relay, claiming the win with a new pool record of 3:29.31, more than 15 seconds faster than the old pool record, set by a Kenyon squad in  2014, and nearly 27 seconds ahead of their own runner up B relay.

The Big Red took home the first event of the men’s meet, claiming the victory in the 400 medley relay and posting a B cut in the process.

In the women’s mile, Amanda Richey of Pittsburgh posted a DI B cut en route to setting a new pool record (the old record set by Taylor Johns in 2014) and winning the event. She finished well ahead of the pack with a 16:28.02. Denison’s Johns took third in the event herself with a 17:12.09, a time that would tie her for 10th in the event, if she wasn’t already ranked as number one in DIII with a 16:47.81.

Kinga Cichowska of Pittsburgh left her mark on the record books in the women’s 100 breaststroke. She posted a 1:02.19 to take down the record set in 2014 by Kenyon’s Katie Kaestner. Cichowska’s final time was also an NCAA B cut for DI. She completed her sweep of the breast events with another pool record in the 200, posting a 2:16.02 to break the record set by Natalie Lugg in 2014.

In the men’s 100 breaststroke, Damon Rosenburg seized the victory with a come-from-behind win. He posted a 57.20 to edge Connor O’Prey for the win. So far this season, Rosenburg’s best time is 55.81, leaving him ranked as the 5th fastest in the division. However, Rosenburg also had the DIII record in the 100 breast until this season when Emory’s Andrew Wilson broke it.

Halli Garza dropped a 2:0.5.45 to claim the top time in the 200 butterfly for the Big Red women. That’s a mere 2 seconds away from her season best of 2:03.77 which has her ranked 5th nationally. There could be some really big improvements there come Conference and NCAA time.

The men’s 200 fly saw yet another pool record drop with Mack Rice of Pittsburgh posting a 1:49.15 to take down the record set in 2014 by Casey Hooker of DePauw.

Diving saw more records come down. Dominic Giordano of Pittsburgh posted a 395.55 to take down the 2012 pool record set by Connor Dignan. (Or, the pool record set the day before by Stephen Ettienne of OSU at 390.30.) For Giordano, that’s the best score from a Panther in about seven years. He was only about 12 points off from the school record of 409.73 set in 2008 by Jeremy Stultz. He also claimed the victory on 1 meter with a season best of 351.60.

Mary Van Leuven claimed the victory in the 100 freestyle with a thrilling one-one-hundredth victory, coming from behind to finish in 52.53. That doesn’t put her on the top 16 list for the division, but she could be biding her time until Conference, and will be a sprint force to be reckoned with.

The men’s 500 freestyle saw Stuart Hohm return to claim the win in 4:37.80. He is currently the 5th fastest 500 freestyler in the division and Denison’s top prospect in the distance events.

Is that Billy Corgan swimming for Dension??