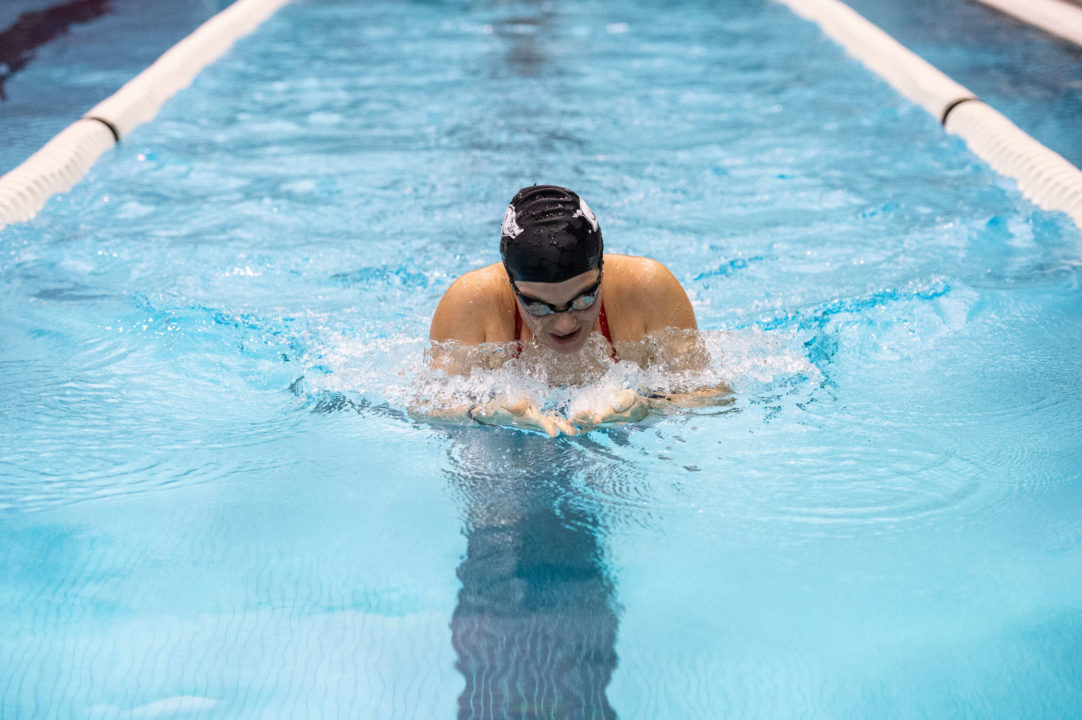 The rising Arkansas women dominated the Kansas Jayhawks on Saturday, winning by 152 points. The victory avenged last year’s loss to the Jayhawks and breaks a tie in the all-time series standings: Arkansas has now won 18 of the teams’ 35 all-time dual meet matchups. This was the most lopsided result in series history.

Arkansas won all-but-one of the meet’s 16 events, highlighted by an early-session 9:44.86 in the 1000 yard free from senior Peyton Palsha. She won the race by over 20 seconds, and in the process broke the Arkansas Pool Record.

The old Pool Record of 9:50.16 was set in 2010 by Chelsea Franklin, an All-American from an era where Arkansas was better known for their distance swimmers than their current rising-reputation in the sprints.

Palsha was one of three seniors, along with Alyssa Lemon and Kenedy Thaman, who were honored before the meet. This is Arkansas’ last meet before the upcoming SEC Championships, though because of relief granted by the NCAA, they would all in theory be eligible to return next season.

“I am just really excited for the team and for the seniors,” head coach Neil Harper said. “They looked like they had fun. I was surprised with how hard we worked this week, how well they responded and how much they made the most of the opportunity.

“It was a good to get the number of fans and family that we had here. I thought the divers did a great job. We are positive and we are confident, and I cannot ask for more than that.

“I thought Kenedy, Alyssa and Peyton did a great job of swimming really well and leading by example today. They had fun, I saw smiles on their faces, it was a big day for them.

“I thought the freshman stepped up again and I think they have welcomed the challenge. They have realized they are on a good team and they are helping us build for the future. I love where we are and are looking forward to SEC’s.”

A second pool record went down when Vanessa Herrmann swam 1:00.58 in the 100 yard breaststroke. That breaks a nearly two-decade-old record of 1:00.99 that was set by then-Alabama swimmer Anna Poleska when Arkansas hosted the SEC Championship meet.

That time is within two-tenths of a second of Herrmann’s lifetime best in the event, which is a 1:00.40 that she set at November’s Missouri Invitational. It is faster than the 1:00.67 she swam at last year’s SEC Championship meet to earn a spot in the B final.

Herrmann also cruised to a win in the 200 breaststroke, touching in 2:13.90 – more than two seconds better than the field.

The one Kansas Jayhawk who was able to break the Arkansas blockade was Dutch senior Manon Manning, who won the women’s 100 backstroker in 53.59. That’s a new season-best time for her and ranks her 4th in the Big 12 so far this season, behind a trio of Texas Longhorns. She beat out Arkansas junior Kobie Melton, who was 2nd in 53.95 – a significant win given that Melton is having a breakout season and won the 100 fly on Saturday in 54.32.

Manning split 24.79 to lead off Kansas’ 200 medley relay, which is within three-tenths of her split from last year’s Big 12 Championship meet.

While Arkansas’ regular-season schedule is wrapped up, Kansas still has a two-day dual meet against Iowa State on its schedule for next weekend before beginning the Big 12 Championships on February 24 in Austin.

My daughter got a mention, so exciting. They did get her name wrong though. It’s Anna Ervin, not Anne.

Fantastic to see that family and fans were allowed into the meet. If we can keep examples like this in front of other conferences, perhaps there is a chance that the conference meets and NCAA’s can have limited, socially distant spectators. Some conferences are not letting parents in even. Let’s hope cooler heads prevail for our sport.

That’s a terrible idea. I think it’s dumb that larger conferences aren’t breaking up their championship meets into north/south or east/west divisions. ACC, B10, and SEC could all have somewhat safer but still highly competitive meets by running smaller conference championships. Parents can watch on livestream this year. Yeah, it’s a bummer you don’t get to witness your kid’s final collegiate event. It’s a global pandemic and hundreds of thousands have died in our country alone. It’s a blessing swimmers are even allowed to compete this year.