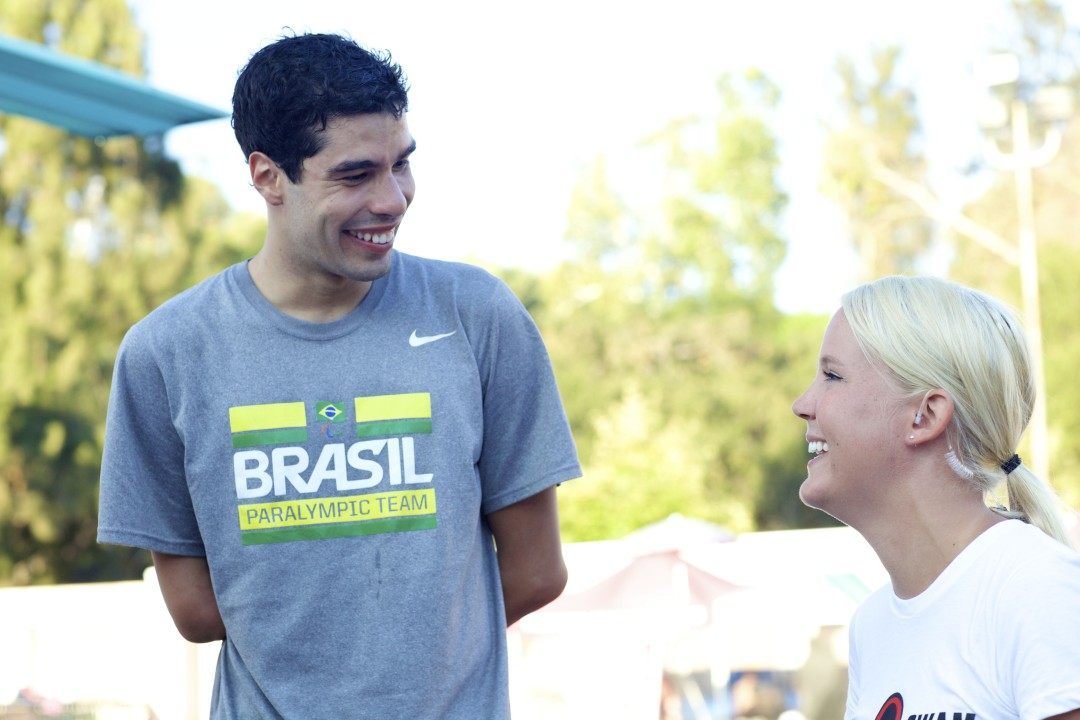 Daniel Dias (left) won his 4th and 5th gold medals of the 2014 Para Pan Pacs with a tough double: the 100 free and the 100 breaststroke. Archive photo via Lawrence Curtis/TheFactoryAgency.com

Australian teenager Maddison Elliott is a new global star in Para swimming. Not that it’s of any surprise – in London she won four medals at just 13 years old, making her the youngest Australian to ever win a Paralympic medal. Since then, she’s torn through the S8 class, and has established herself as that group’s star swimmer, despite being just 15 years old.

She took another big step in that direction on Friday night at the 2014 Para Pan Pac Championships in Pasadena, California when she won the women’s 100 backstroke in 1:18.71. That’s a new lifetime best for her, a new Australian Record.

It’s also a big hurdle cleared as she beat the defending Paralympic silver medalist Jessica Long, who took 2nd in 1:21.12. The retirement late last year of World Record holder Heather Frederiksen leaves Elliott and Long as the clear global favorites in this event, and Elliott will have the upper-hand when this event is added back into the IPC World Championships schedule in 2015 (it wasn’t raced in 2013).

Elsewhere in the women’s 100 back, New Zealand’s Mary Fisher won the women’s S11 free in a landslide with a 1:18.94. She was already the fastest in the world in this event in 2014, but this swim not only extends that margin, but gives her the fastest time we’ve seen since 2012 – the swim would have won gold in London. The S11 class is the beginning of the visually impaired classes, and is made up of athletes who are completely blind.

Brazil’s Daniel Dias tackled his tough double with seeming ease. First he won the S5 100 freestyle in 1:09.28, using a scorching front-half (34.14) to put the field away early. Dias won that race in 1:09.28, with American Roy Perkins Jr. earning silver in 1:18.68. That missed Perkins’ own World Record by a few tenths, but it is the fastest time in the world in 2014 – by seven seconds. He was well faster than the 1:17.05 that Spaniard Sebastian Rodriguez won with at the European Championships this week.

Dias then swam to his own stratosphere in the SB4 100 breaststroke, where he swam a 1:38.06 to win by 18 seconds. He didn’t come close to his World Record, but he had three things working against him on Friday. His focus has really turned away from the breaststrokes, he had no competition to push him, and he was on the back-end of a difficult double.

In the men’s S9 100 free, Australian Rowan Crothers, who set the World Record last week in Glasgow in this event, added about half-a-second. He still had plenty of room to win though in 55.09. That was part of an Australian 1-2-3 in the event, as Brenden Hall was 2nd in 57.01 and Matthew Cowdrey was 3rd in 58.01. Those three remain the top three ranked swimmers in the world, but none of them went best times in this meet (Hall and Cowdrey weren’t even close). That’s the first sign to the answer about questions of where the Australian men’s sprint group was at the Commonwealth Games – which is not a good sign for the likes of Cameron McEvoy and James Magnussen as they head for Pan Pacs in two weeks.

The Australian men were dominant in that 100 freestyle. In the S3-S9 classes, they won every gold medal in which they were entered (there was nobody put up against Dias’ challenge in the S5 group). His biggest competition, if he chooses to resume competition in the event at Worlds next year, are Colombia’s Moises Fuentes Garcia, Spain’s Ricardo Ten, and Greece’s Antonios Tsapatakis. Ten was a 1:37.2 in Eindhoven this week to win the European title.

Elsewhere in that 100 free, American Brad Snyder won the S11 class in 57.31. That makes the U.S. Navy veteran the first swimmer in the class to go under a minute in this race since the 2012 Paralympic Games, where he won a monumental battle against China’s Yang Bozun.

The Mexican women took the title in the night’s first relay, the women’s 200 medley relay, in dominant fashion. That includes a fantastic anchor from S6 swimmer Susana Ribeiro, who split 37.05. Ribeiro previously won the women’s S6 50 free individually, and was half-a-second better on this relay.

As an S6, she cost Mexico an extra point, but that anchor split was well worth it. In the 20 point relay, the classifications of each swimmer are added up, and the total must be 20 or less.

The women’s 34-point relay came after that, and the Australian women, who are loaded in the pertinent S7-S10 classes, came away with a 5:02.05 second victory, beating the runner-up Americans (5:05.82).

The Australians led off with Ashleigh Cockburn, and followed her with Madeleine Scott. Scott split a 1:21.80, which was very important to the Australian effort as the butterfly leg was not the strength of their relay. While Maddison Elliott beat Jessica Long in the individual 100 backstroke, for this relay she shifted over to the butterfly leg. That’s where Long is at her best, and it’s not Elliott’s best stroke.

Elliott did go a respectable 1:15.26, to hold off a hard-charging 1:10 split from Long. Lakeisha Patterson anchored for Australia, and like Elliott just had to hold off her American counterpart, which this time was Michelle Konkoly. Konkoly was impressive in 1:02, but Patterson had plenty of room to get to the wall for the Australian win.

Other Event Winners on Day 3: