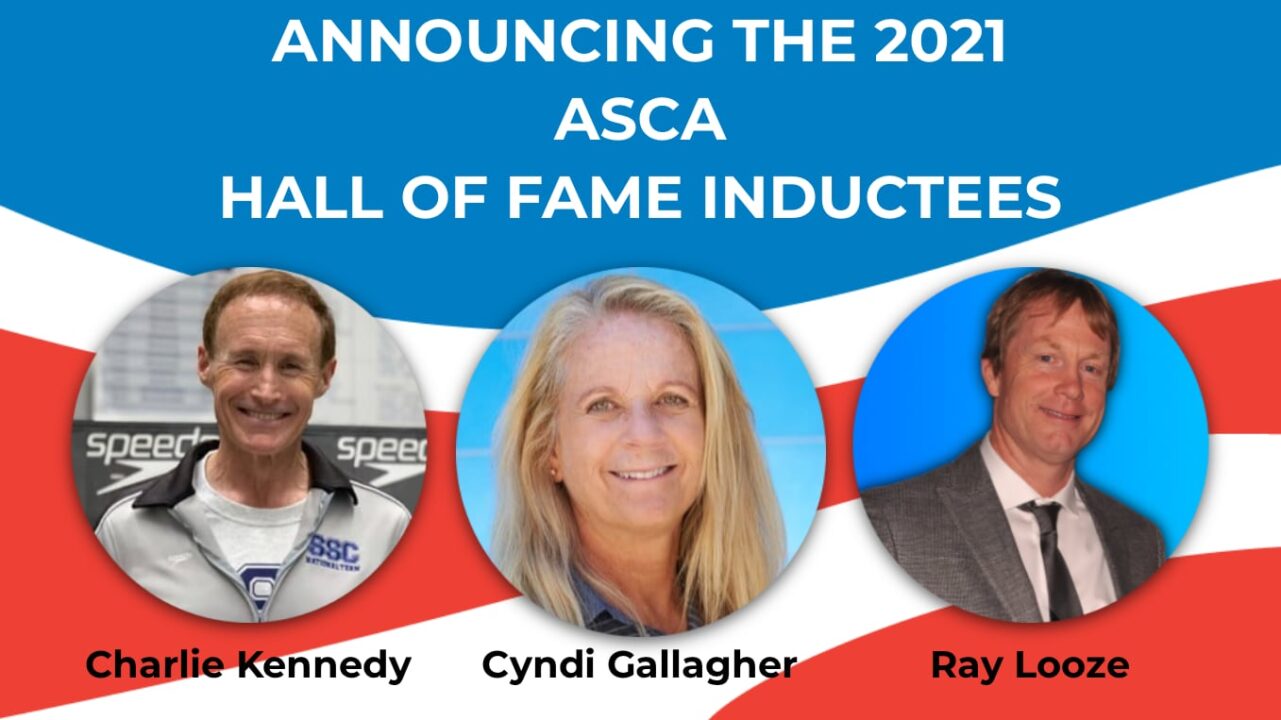 The coaches will be inducted into the ASCA Hall of Fame at an awards dinner on September 16 at the ASCA World Clinic in Orlando, Florida. Current photo via ASCA

The coaches will be inducted into the ASCA Hall of Fame at an awards dinner on September 16, 2021 at 7:00 p.m. at the Rosen Hotel in Orlando, Florida, during the ASCA World Clinic.

The American Swimming Coaches Association recognizes the greatest swimming coaches in the United States. Inductees date back to 1958 and have developed the most accomplished athletes in the sport of swimming. The ASCA Hall of Fame coaches have not only produced world class athletes, but they have contributed to the history and success of American Swimming. They have created programs and methodologies that have elevated the sport of swimming in the United States and around the world.

Coach Cyndi Gallagher, one of the top college coaches in America, recently retired after 31 seasons as women’s head coach of the UCLA Bruins having compiled an impressive win-loss record of 194-104-2. She is currently coaching DC Trident in the International Swim League. She has coached Olympians, NCAA and USA national champions and national team members including Annette Salmeen and Kim Vandenberg. She was recognized by Team USA when she was named to the 2014-2015 U.S. National Team coaching staff.  In nine of her 31 years at the helm of UCLA women’s swimming, her Bruins finished among the nation’s Top 10 teams. They were among the Top 15 teams in 15 of her years.

Coach Charlie Kennedy has served for over 35 years as the head coach of Suburban Seahawks Club, a regional powerhouse and nationally recognized program near Philadelphia, PA. During Coach Kennedy’s 35 years as head coach, the program has grown from 25 swimmers to over 200 swimmers. He has also been a coach at Swarthmore College since 1997. In his tenure at Suburban, Kennedy coached hundreds of swimmers of all ages, including standouts Brendan Hansen, a World Record holder and 2004 and 2008 Olympic Gold Medalist, as well as Grace Cornelius and Corrie Clark, both individual USA National Champions. Kennedy has received many accolades including ASCA Age Group Coach of the Year, Middle Atlantic Age Group Coach of the Year and Senior Coach of the Year on multiple occasions, and NCSA Coach of the Year.

Coach Ray Looze has achieved incredible success in the past 18 years as head coach at Indiana University. He has helped the Hoosiers garner 720 All-America honors, 22 NCAA champions, 18 top-10 finishes at the NCAA Championships, nine Big Ten Championships, 10 Olympic swimmers, and seven Olympic swimming medals. Looze was a Team USA coach at the 2016 Rio Summer Olympics. His swimmers Lilly King, Cody Miller and Blake Pieroni have achieved international success at the Olympics and World Championships while earning medals and setting world records in the process.  He was named American Swimming Coaches Association Coach of the Year in 2017 and CSCAA National Swimming Coach of the Year in 2018.

Congrats to all the recipients. A true honor to be recognized by your peers.