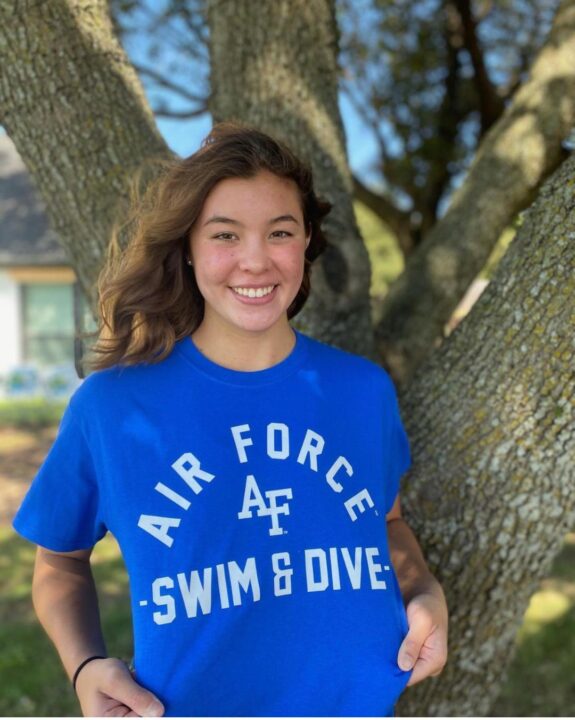 A two-event winner at the Texas 6A Girl’s Swimming and Diving Championships earlier this year, Corbyn Cormack of the North Texas Nadadores has announced that she will be swimming at the Air Force Academy in the fall. Cormack attends Southlake High School.

“I am blessed to announce my verbal commitment to continue my academic and swimming career at the U.S. Air Force Academy! Thank you to my family, friends and coaches who supported me to reach my goals. I look forward to serving my country. Go Falcons!”

A versatile swimmer, Cormack’s best events are the 100 fly and 200 IM, both of which she won at the Texas high school state meet. In the fly, she won by over two seconds, taking a second and a half off her lifetime best to touch in 53.13. Her finish in the IM was equally impressive, as she won the event by over two seconds as well to finish in 1:59.50, dipping below 2:00 for the first time in her career.
Cormack’s state titles in 2021 weren’t her first, as her 200 IM title was her second straight in the event. At the 2020 State Championships, she claimed the title with a time of 2:00.39.

The Air Force women are coming off of a season that saw them take 7th at the 2021 Mountain West Conference Championships.

Cormack is a huge pickup for the Falcons, who failed to place an athlete in the A-final of the 100 fly or either IM event. With her best times, she would have not only qualified for the A-final in all three, but would have been the fastest competitor in both the 200 IM and 100 fly. In both events, she would have held Air Force’s top time by multiple seconds.

When she arrives on campus this fall, Cormack will already have a time that is faster than the program record in the 100 fly. The current record stands at 53.59, set by Elise Hart during the 2016 season.