Connor Jaeger Named University of Michigan Athlete of the Year 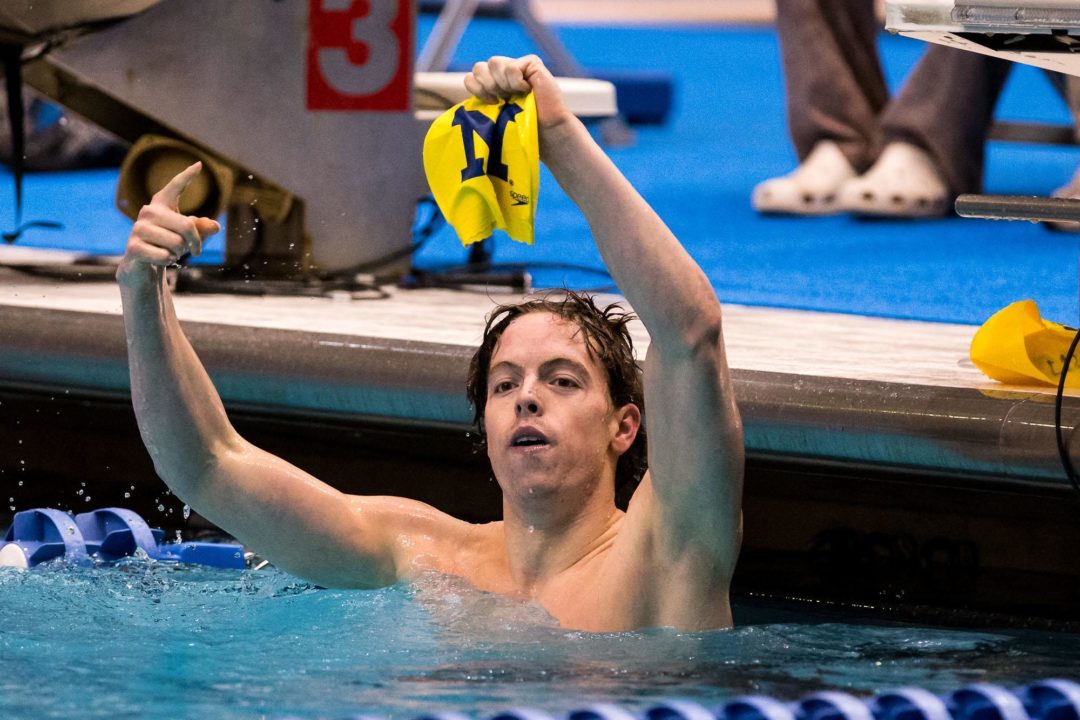 Michigan athletics is having a banner season, and Connor Jaeger still stood out among the crowd as the 2012-2013 Male Athlete of the Year. (Photo: Tim Binning/TheSwimPictures.com)

The University of Michigan Athletic Department announced on Wednesday that Connor Jaeger has been named the school’s male athlete of the year, with gymnast Joanna Sampson winning the women’s award.

Jaeger joins an impressive list among male swimmers to have won this honor in 22 years of its history:

That group of seven men has combined for 14 Olympic medals (7 gold, 3 silver, and 4 bronze); each member of the list aside from Jaeger has at least one Olympic medal to their name, and all aside from Borges and Jaeger have at least one gold (though the Brazilian Borges has four total and three individual, so he’s no slouch either.)

Each winner now becomes eligible for the Big Ten Athlete of the Year, which is voted upon by the media.

“Joanna and Connor are most deserving of the Female and Male Athlete of the Year awards,” said Dave Brandon, the Donald R. Shepherd Director of Athletics. “Both individuals stood out above the rest in what has been a stellar year for Michigan Athletics. Joanna and Connor take great pride in representing Michigan, and we are pleased that both student-athletes will be returning this Fall for their senior seasons. We look forward to watching them continue to lead the women’s gymnastics and men’s swimming and diving programs to be leaders and best.”

Jaeger took this award by being the best swimmer on the 2013 Men’s NCAA Championship team, which they won over runners-up and defending champions Cal. That included individual national championships in both the 500 and 1650 freestyles and the Big Ten Swimmer of the Year after winning conference titles in the 500, 1650, and 800 free relay.

Other honors that Jaeger has picked up this season includes a spot on the Capital One Academic All-American 2nd team; an Olympian in the 1500 meter free, finishing 6th in London; and being named the Michigan Male College Athlete of the Year by the Detroit Athletic Club.

Jaeger took the award despite the men’s basketball team igniting the student body and making it all the way to the National Championship game, where they were eventually beaten by Louisville. The NCAA Basketball Tournament overlapped with the NCAA Swimming Championships. The men’s gymnastics team also won the National Championship, including Sam Mikulak winning three individual titles (and also being an Olympian.)

Totally deserved . We count on you Connor to show us some fanatstic swims at trials and for the WC in Barcelona . I love this swimmer .

It’s really great that in the world of football and basketball being HUGE at the collegiate level that swimming gets the recognition it deserves. Props to Connor Jaeger on a great accomplishment.

Great to see swimming get respect, but how does the Naismith award winner, Trey Burke, not win this award?

Because Jaeger is the undisputed best distance swimmer in college, an olypic finalist at 21 years old, and a leader of a team that WON the national championships. Trey Burke is overrated

He might be overrated, but it just seems strange to give him athlete of the year over the national basketball player of the year… It’s cool to be the best distance swimmer in the ncaa, but was he even in the conversation for swimmer of the year? No way. I’m not saying he’s undeserving, I’m glad that he won, it’s just surprising to me that the Naismith player of the year would be passed up for a distance swimmer… Btw I’m curious do they include Olympic competition in the decision?

This award is given to the best athlete, that means who is closest to being #1 in their respective sport. Jaeger is the best distance swimmer in the NCAA, and one of the best in the world. Burke is a great basketball player, but NCAA basketball is much weaker than NCAA swimming, because all the great players are in the NBA. Many of the best swimmers in the world are in college, so Jaeger is competing against a higher level of talent than Burke. I love college basketball, but Jaeger is one of the top in the world at his craft, it might be hard to put Burke in the top 30 for his position, so while he is a… Read more »

Being top of the world can be disputed..

And it may sound harsh for some.. but With Yang and Cochrane playing their game.. with Mellouli still kicking and with the other future top contenders who are Younger than him and already faster (Paltrinieri and Horton) he may NEVER get a medal on OG

I completely agree that Connor jaeger is better on an international stage than trey Burke… But when one athlete is the national player of the year in one sport it surprises me that a swimmer who was not even In the discussion for swimmer of the year would beat him out for this award… Good for Connor though he certainly deserves the recognition, I’m just surprised

Rafeal, why are you obsessed with belittling American swimmers? I think making it to an Olympic final is a fantastic achievement and is evident he’s one of the top distance swimmers in the world.

and he will never win an Olympic medal? Don’t you think it’s a bit premature to write off a 22-year-old swimmer who is continually improving?

In his case? Not.. he is older than his competition.. who are already faster than him.. the guys who are the same age or older (Yang Cochrane Mellouli) were already much faster than him at the same age. I thought Paltriniery might have a shot someday.. but with the Australians.. he is out also. And any guy who does not live to standard.. I don´t have the “classy guy attitude for it” Phelps is a winner.. Locthe also (but I don´t like his Phelps obsession it does not work for him) Adrian also (and for me a medal lock on 50 and 100).. but some guys even if people love them.. I would not point them at OG medalists.. before… Read more »

well, at least some international posters here appreciated his accomplishment. No one even brought up he could win an Olympic medal (just a casual remark he was one of the top 1500 swimmers in the world), and all you did was demean. I guess for you, it’s Olympic medal or bust. The Olympics are great but there’s a lot more to swimming than that and if that’s all you care about, then you’re truly not a fan.

and everyone, mark Rafeal’s words: the 18-year-old Paltrinieri who finished 5th is completely out for any Olympic medal. Maybe he should save us all some time and retire now.